When Godfrey Reggio's wordless documentary, Koyanisqaatsi: Life Out of Balance, was first released in 1982, much more attention was focused on Philip Glass's score and Ron Fricke's cinematography than the ecological message contained in the film. Since then, the globalization of catastrophic news, combined with cable media's need to incite and spread fear whenever possible, has given man a keener perspective of how puny he is when pitted against the force of nature.

Unfortunately, man's ability to screw things up also finds its way into the news. On April 20, 2010, the Deepwater Horizon oil spill caused a major environmental crisis in the Gulf of Mexico. By the time the leak was capped, an estimated 4.9 million barrels of crude oil were contaminating one of the world's largest food sources. Two years later, this report from Al Jazeera English is cause for concern.

On March 11, 2011, the Tohoku earthquake and tsunami rocked Japan and shocked the world. Not only was the event the most thoroughly documented disaster in history, many of the observers, survivors -- and even some of the victims -- filmed the destruction as it happened before their horrified eyes.

However, as the crisis surrounding the Fukushima Daiichi nuclear facility gained greater clarity, it was difficult to assess the impact of the radioactive pollution emanating from the damaged reactor. Samples of marine life and wreckage from the tsunami were measured for radioactivity. Some even predicted that northern Japan would become a dead zone for decades to come.

Isamu Hirabayashi's breathtaking six-minute animation short entitled 663114 puts a fascinating twist on the aftermath of the Tohoku earthquake, the tsunami and the core meltdown at the nuclear plant.

With a phenomenal soundtrack composed by Osaka-based sound producer Takashi Watanabe, 663114 was recently screened at the San Francisco International Film Festival. The film's tagline states that "a 66-year cicada has been waiting a long time and understandably has a lot on its mind as it creeps up your wall to do God knows what." 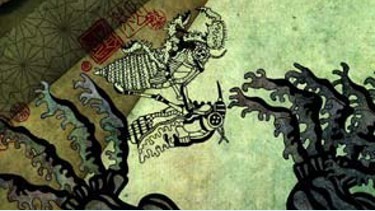 Hirabayashi (a Japanese filmmaker who directs TV commercials for his living) turned to a more traditional form of Japanese art in his quest to express his feelings about the radiation leaking from the Fukushima Daiichi plant. The numbers contained in the title of his film (663114) have a dark significance:

As Hirabayashi's animated cicada attempts to crawl up a tree, the narrator explains that:

"Once every 66 years,
I emerge from the ground, leave offspring and die.
Before mating,
I shed my hard shell at the risk of my life.
Our ancestors have continued this cycle countless times.
The soil of this country is very fit for us to live in.
It is free of strong pesticides and there are no land mines.
The water is delicious so the sap is delicious as well.
I will climb as high as I can.
Aiming higher and higher.
It is our natural instinct.
To survive and leave offspring.
Since the moment of shedding skin is life risking.
We choose a tree that is tall, sturdy, and won't shake that much.
Our ancestors have continued this cycle countless times.
Through the various hardships."

In 663114, the dark waves of the tsunami are frightening and yet, when the cicada reemerges from the wreckage and radiation, it has undergone a severe mutation which has given it wings of rare beauty. Hirabayashi's short is an exquisite example of how art can explain nature with a depth and poetry that live footage of a disaster can never match.

I often wonder if the old saying "Water, water, everywhere, and not a drop to drink!" should be upgraded to "Data, data, everywhere, and not much time to think." A curious black-and-white short that appeared with 663114 on the Shanimation program at the festival shows how data can be used to create a powerful piece of art.

Filmmakers Ruth Jarman and Joseph Gerhardt used data collected from the CARISMA radio array as a geomagnetic storm occurred in the Earth's upper atmosphere and interpreted it as audio. The film's sound is the tweeting and rumbling caused by incoming solar wind that was captured at a frequency of 20 hertz.

Based on Ronald Wright's bestseller, A Short History of Progress, a new documentary entitled Surviving Progress asks viewers to take a good hard look at the price we pay for all of our technological advances. Whether focusing on the crises created by deforestation and overpopulation -- or the role mercenary banks have played in saddling emerging countries with debt and concentrating wealth in the financial class -- this new film by Mathieu Roy and Harold Crooks is, at the very least, gorgeous to watch. 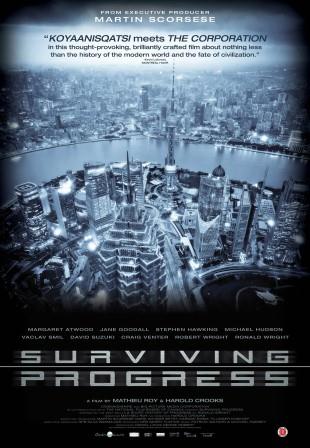 Whether visiting a chimpanzee research lab in New Iberia, Louisiana or exploring the Amazon rainforest, Surviving Progress takes a cynical look at the damage man keeps inflicting on his environment and wonders how much longer we have before the law of diminishing returns starts to work against us.

Time spent with Chen Ming, a Chinese man who is giving guided automobile tours to China's nouveau riche (many of whom do not yet know how to drive), is contrasted with Enio Beata, a Brazilian sawmill owner who states that, "The people responsible for destroying the Amazon are the big farmers, the international corporations. The biggest farmers are senators, deputies, colonels. They're the ones destroying the Amazon forest. Them. Not us."

As the No Impact Project's representative Colin Beavan explains: "Before I go around trying to change other people, maybe I should look at myself and change myself and keep my side of the street clean."

In many ways, Surviving Progress is a logical successor to Koyanisqaatsi and 2003's The Corporation. Its perspective is provocative, its data disturbing and yet, because of how beautifully it has been filmed, viewers might find themselves tuning out the talking heads to concentrate on the documentary's lush visuals. Here's the trailer: