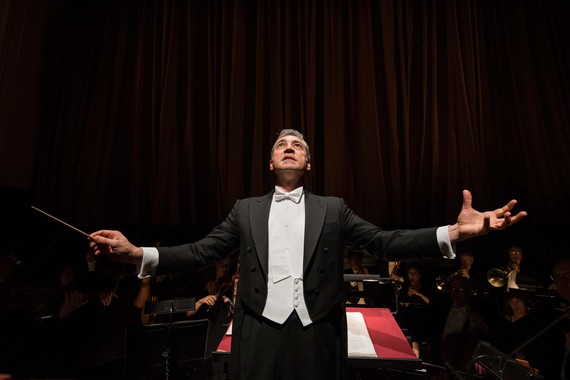 San Franciscans like to play a bit fast and loose with history - so nobody questioned the period accuracy of French poodles welcoming patrons to the opera ball. Why would you? They were beautifully groomed, as were their observers. So what if the gamines in Marie Antoinette wigs and grand Ali Rahimi gowns represented the "opposition" of the evening's opera, Andrea Chenier, a poet executed for supposed royal loyalties in the French Revolution? The patrons were here to support the Opera education and outreach, and eat cake, as it were, not to quibble about an opera set in France but sung in Italian. So "La Revolution et L'Amour" happily coexisted as the theme of the evening, and the poodles charmed throughout a chilly cocktail hour amidst the boxwood hedges. Once inside J. Riccardo Benavides' sumptuous dinner pavilion, 700 guests warmed up with McCall's Continental menu of Dungeness Crab salad with taragon gelee, Short rib pot-au-feu with potato horseradish puree, and Profiteroles au chocolat, accompanied by Roederer Estate Brut, Ram's Gate Chardonnay, and J. Lohr Cabernet. Flowers, candles, filigree walls and chandeliers illuminated the gilded Great Dane sculptures in the entryway and tables set with an agreeable arrangement of banquettes and chivari chairs, each heavily laden with china and crystal that would have been happily housed at Versailles. The effect was just right for the grand gowns that made their entrance that evening, one more voluminous than the next. Last season's slylph has been replaced with a more substantial presence, with many dresses revealing a bit of decolletage set off by voluminous skirts, often floral prints in vibrant colors. The gentlemen obliged with trim tuxes and a few stalwarts in white tie and tails, always appreciated for the most formal event of the Fall Season.

Once dinner was a fait accompli, the long slow procession to the seats began - much more festive than that in the opera, where poor Andrea Chenier marched to his conclusion preoccupied with poetry and rather than revolution. As is an Opening Night tradition, the boxes were richly rung in wreaths of carnation tricolore, a reminder of the fraternite and liberte, if not egalite, of the French Republic. Board Chair John Gunn and President Keith Geeslin thanked patrons, welcomed new Executive Director Matthew Shivlock to his first season, and recognized Music Director Nicola Luisotti, who expertly conducted the orchestra that evening. After a rousing Star Spangled Banner where many in the audience adeptly hit the high notes, the stage spectacle began. Umberto Giordano's "Andrea Chenier" unravelled as the audience observed his slow singing slide to the gallows, in the company of a superb soprano and two score of supernumeraries. With only one intermission to see and circulate, patrons were up and out of their seats in short order at halftime, and then eager to make an appearance at the Post-Performance Celebration back in the party Pavilion. Instead of brioche, McCalls laid on a savory and sweet repast of small bites for all, and a full festive feast for the cast, who had truly sung for their supper. The dancing and dining and a bit more drinking went on until the wee hours, when the most revolutionary war between love and sleep was waged by poets and lovers of all kinds, and the Opera Ball went the way of the monarchy.