Just because the San Francisco Giants clinched the 2012 World Series in cold, damp Detroit didn't mean that there was no hot party in San Francisco. Thousands of fans congregated near City Hall to watch Game 4 and the crowd erupted after Giants closer Sergio Romo struck out Miguel Cabrera to secure the franchise's second championship since moving to the Bay Area.

As was the case after the team won the 2010 title, the raucous celebration was reportedly punctuated by fire and rioting, according to various reports.

Some of more rambunctious fans "set off fireworks, lit bonfires and climbed atop Muni buses or any car that happened to be at hand," per the San Francisco Chronicle.

KTVU reported that police were being deployed to "hot spots" around the city. Many on Twitter were listening in to the police movements via ScanSF.com and tweeting about events using the hashtag #SFRiots.

News personality Eric Richards also tweeted a photo of a vehicle that was supposedly tipped over near AT&T Park.

"We're going to help the partiers party," police Sgt. Tad Yamaguchi told the San Francisco Chronicle while describing precautions taken based on events in 2010. "As long as they're lawful and having fun, we're all for it."

Based on these pictures, it looks like many Giants fans were having fun. Unfortunately, not all of the revelry looks entirely lawful.

SAN FRANCISCO -- They came from all corners of the region and screamed louder with each strike and every out in the bottom of the 10th inning as the San Francisco Giants closed in on a second championship in three years Sunday.

The 2,000 fans assembled to watch the game on a Jumbroton a park across from City Hall grew in numbers and volume throughout the chilly and foggy night, exploding in unison with a roar with the final out.

Anthony Yos, 10, hugged his brother Luciano Yos, 15 and the two danced in an embrace with their parents.

"This is the greatest thing," Anthony said with a smile that could go no wider. "The Giants are my favorite team."

Someone in the crowd launched fireworks a few minutes after the game and the park was awash with revelers, strangers hugging strangers and wine bottles and marijuana cigarettes being freely passed through the crowd despite a heavy police presence.

"This is San Francisco, "said Laura Chu. "We know how to party."

Sara Vivas brought her 6-year-old daughter Briana Cepeda from Oakland to view the game and join the celebration. They were both clad head-to-toe in Giants garb.

"This is something she will remember forever," Sara said.

Bars of all stripes, from the Castro to Chinatown were packed with fans and revelers rooting on the beloved Giants. City workers have even erected viewing stands across from City Hall for the second celebratory parade through the city in the last three years.

Mayor Edwin Lee announced the ticker-tape parade would be held Wednesday at 11 a.m., down Market Street to Civic Center Plaza

"The rain in Detroit couldn't dampen the drive, talent and determination of the San Francisco Giants team tonight. Once again, the Giants brought our City together as we all cheered on our hometown heroes to another remarkable World Series victory," he said.

The party started early in Civic Center park, with many showing up hours before the 5 p.m. game on a nice Indian Summer day in San Francisco, wearing shorts and t-shirts. The bnlankets and sweaters came out when the sun went down and the fog rolled in, but the chill didn't damper the enthusiasm. Many in the crowd were carrying brooms in hope of the series sweep that came to be.

The city's ubiquitous food trucks did a brisk business and drummers of all types beat their instruments throughout the game.

"Where else in the world do you want to be tonight," replied Dave Wormald of Toronto. Wormald and two other colleagues were in town for a business meeting and were watching the game at their hotel when they decided to embark for City Hall.

"This is the place to be," said Jim Vliet, Wormald's colleague. 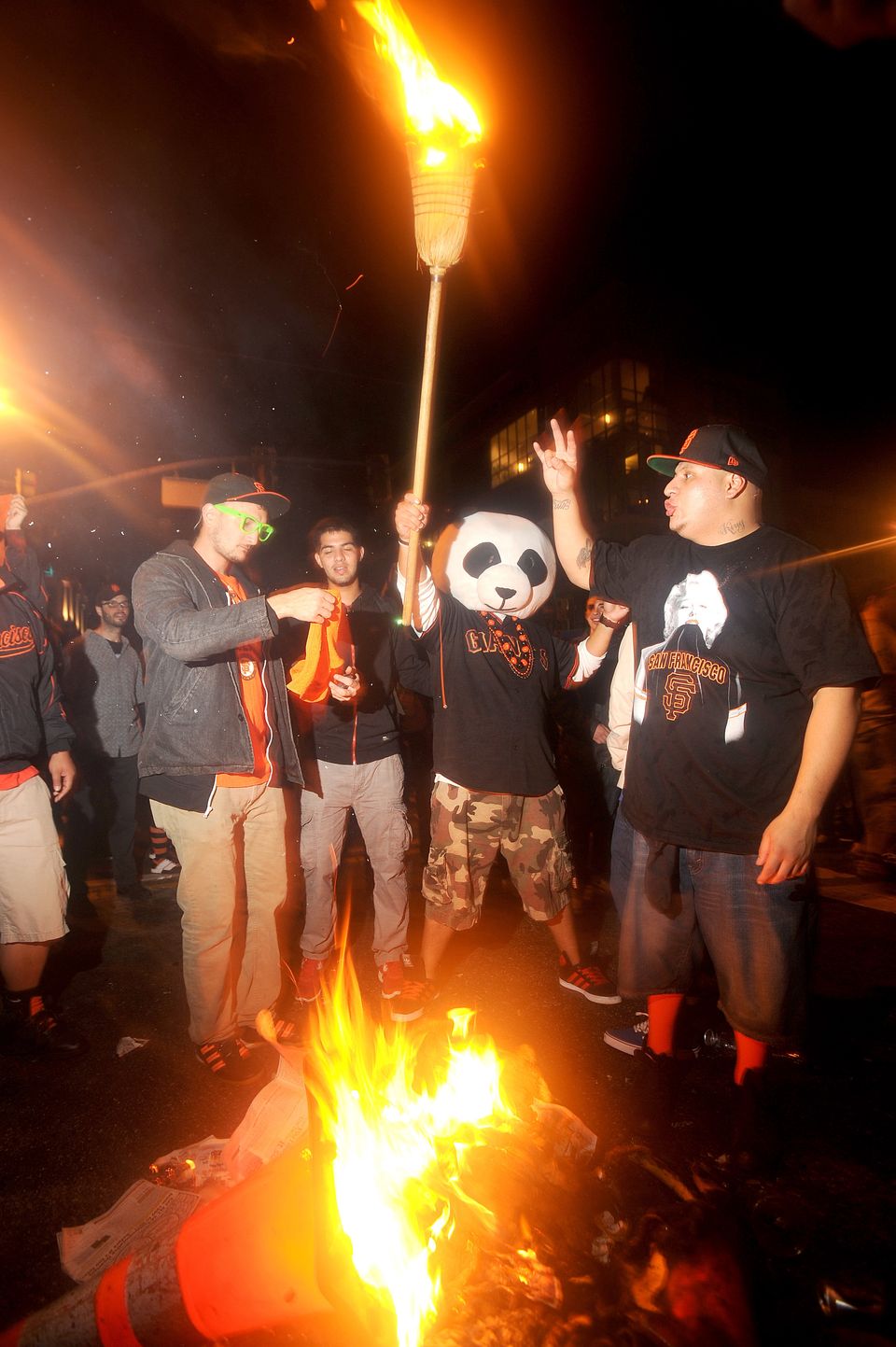