"Sex workers go to work, come home, take care of their children -- just like everybody else," reads the poster on Muni. Below the quote is a portrait of a smiling woman with a tagline reading: "Someone you know is a sex worker."

This poster is one of many included in St. James Infirmary's new media campaign promoting the rights of local sex workers. A collaboration between St. James Infirmary (a San Francisco peer-based organization offering free medical and social services to sex workers) and artists Rachel Schreiber and Barbara DeGenevieve, the campaign features portraits of sex workers and supporters -- spouses, partners, family members and health care professionals -- putting faces to the people who work in the industry.

While photographing, Schreiber interviewed her subjects and included quotes on the posters, reading: "No one asks, 'you're so smart, why did you become a plumber?'" and "Farm work can be difficult, but we don't outlaw agriculture. We regulate it to improve conditions for those who work in that industry."

"We wanted to make visible the workers who tend be invisible," said Schreiber to The Huffington Post. "Sex workers aren't people hanging out in a dark alley somewhere; they are nurses, teachers and mothers. Our goal is to demystify sex workers. They are just everyday people." Schreiber believes that because of the mystery and invisibility surrounding the sex industry, workers have trouble accessing the resources they need -- an issue she's hoping the campaign will bring to light.

Schreiber, a volunteer at St. James Infirmary, had been interested in launching a media campaign for years. But the recent controversy surrounding Ashton Kutcher's anti-sex trafficking campaign caught her eye. "Of course St. James Infirmary and I are against sex trafficking," said Schreiber. "No one should be forced to do something they don't want to do. But the figures are so often exaggerated and that doesn't help the problem. When the focus of so much media attention is on the trafficking, it doesn't leave room for anything else -- like the resources to keep those who choose to work in this industry safe and healthy, and to give those who feel like they don't have a choice a way out."

According to Schreiber, the problem with the media attention is that it fuels enforcement rather than support. "Many of the sex workers we assist at St. James choose to do what they do. And they have needs and rights just like everyone else," said Schreiber. "And for those who feel stuck due to financial situation, the answer is in getting them the help they need, not in having them arrested."

The result of the project: an honest, sincere and informational campaign across San Francisco. Schreiber originally planned to house the campaign on billboards across the city, but both Clear Channel and CBS Outdoor rejected the campaign, telling Schreiber that "sex worker [is] not a family friendly term."

"I was working with a local sales rep from CBS Outdoor, and at some point she told me that she'd have to 'run the creative by corporate.' At that point, I began to suspect that they wouldn't run the campaign." After working with CBS, she contacted Clear Channel, telling them outright that she'd been rejected by CBS. "The rep told me that Clear Channel tends to be even more conservative than CBS Outdoor."

"We're hoping this starts a dialogue," said Schreiber. "And we want sex workers to be a part of that dialogue."

Check out posters from the St. James Infirmary in our slideshow below, courtesy of Rachel Schreiber: 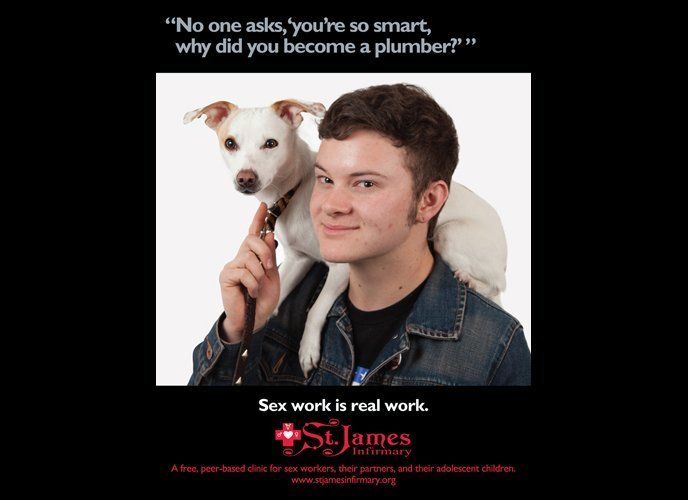 1 / 6
Someone You Know Is A Sex Worker
St. James Infirmary