If you have any interest in Sherlock Holmes or Dr. Who, Jazz Age flappers, world's fairs, or meeting an unique Academy Award winner--then you won't want to miss this year's Silent Film Festival. There is a little something for everyone. The annual event, which celebrates its 20th anniversary, is set to take place May 28th through June 1st. To celebrate 20 years of showcasing silent film--often times rare or restored prints and almost always with live musical accompaniment, here are 20 reasons to attend the 2015 event. 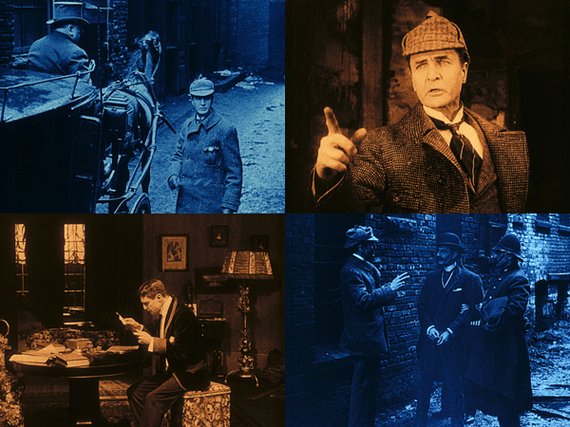 1) SHERLOCK HOLMES: By the time Sherlock Holmes (1916) was made, its star William Gillette was long established as the world's foremost stage interpreter of Arthur Conan Doyle's famous character. Gillette visually defined Holmes' methods, manner, and look, especially his signature attire, and his performances were widely praised, even by Doyle himself. This film, long thought lost, was recently found and restored and here makes its North American debut. See where the future Holmeses--John Barrymore, Basil Rathbone, Jeremy Brett, Benedict Cumberbatch and the rest--come from. [Reportedly, fans are flying in from all over for this special screening, which is being underwritten by a major Holmes collector. If you can't make the event, Flicker Alley announced that they will be releasing the film on DVD in the fall.]

2) DR. WHO: It's no surprise the popular time-travelling British television character enjoys silent cinema, as he likely experienced its glories during his many adventures in space and time.... Real life British actor Paul McGann, the actual 8th Doctor and himself a devotee of silent film, live narrates a couple of presentations, including The Ghost Train (1927), a decidedly Whovian film which tells the story of eccentric travelers stranded at a dubiously haunted station.

3) COLLEEN MOORE: She was as popular as Clara Bow, and had pulchritude like Louise Brooks. Yet, how many can claim to have seen one of her pictures? Colleen Moore is perfect in Why Be Good? (1929), where she plays the aptly-named Pert Kelly, shop girl by day, flapper by night. F. Scott Fitzgerald wrote: "I was the spark that lit up Flaming Youth, Colleen Moore was the torch." 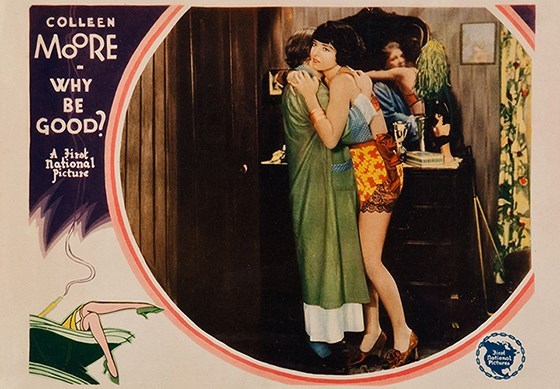 4) LOCAL HISTORY: The Festival screens When the Earth Trembled (1913), a newly restored film that's likely the first feature about the 1906 earthquake. It contains some nifty special effects and rare footage shot in San Francisco in the days following the disaster. And, to mark the 100th anniversary of the Panama Pacific International Exhibition (a world's fair that celebrated The City's recovery), the Festival will also screen short films shot at that historic event.

5) KEVIN BROWNLOW: Arguably, the above mentioned festivals might not exist without Kevin Brownlow: author, archivist, documentarian, champion of the silent cinema--Brownlow's importance to film history cannot be emphasized enough. His 1968 book, The Parade's Gone By, inspired a generation of enthusiasts. It's a must read. His 1979 TV series, Hollywood, set the standard for just about every documentary that followed. In 2010, in recognition for all he has done, Brownlow received an Academy Honorary Award, the first time an Oscar was awarded to a film historian! The British film preservationist will be in conversation prior to the screening of his restoration of the Festival's closing film, Ben Hur (1925).

6) FAN FAVORITES: This year's films star legendary names like John Gilbert and Greta Garbo, and Harold Lloyd. But look a little deeper into the credits and you'll find up-and-comers whose reputations were made in later years, like Boris Karloff in The Deadlier Sex (1920), and Neil Hamilton (Commissioner Gordon in TV's Batman) in Why Be Good? 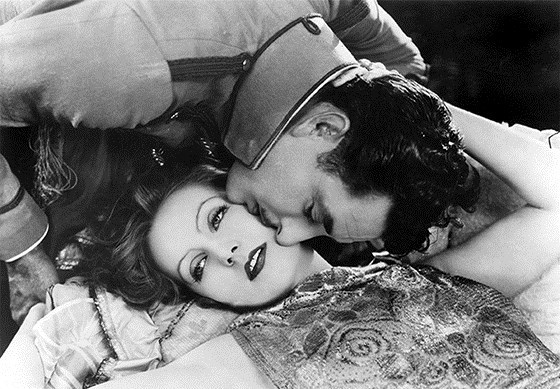 7) LEGACY: With the passage of time, the children and grandchildren of silent film personalities are as close as we may come to their work. In attendance will be actor William Wellman Jr., son of the Academy Award winning director and author of the just released biography Wild Bill Wellman: Hollywood Rebel. Also presenting or signing books are Suzanne Lloyd, granddaughter of Harold Lloyd, and Jessica Niblo, daughter of Why Be Good? director William Seiter.

8) SPECIAL GUESTS: Well known critics Leonard Maltin and David Thomson will also be on hand, as will authors and film historians John Bengtson, Cari Beauchamp (My First Time in Hollywood), Jeff Codori (Colleen Moore: A Biography of the Silent Film Star), David Pierce (The Dawn of Technicolor), Weihong Bao (Fiery Cinema: The Emergence of an Affective Medium in China, 1915-1945), and others.

9) SPOKEN DIALOGUE: The Donovan Affair (1929) was Frank Capra's first "100% all-Dialogue Picture." Its soundtrack, however, has been lost. For this special screening, the soundtrack will be recreated with live dialogue by Allen Lewis Rickman (Boardwalk Empire), Yelena Shmulenson (A Serious Man, The Good Shepherd), veteran actor, writer, director Frank Buxton (who similarly voiced a part in Woody Allen's What's Up, Tiger Lily?) and others. Not to be missed.

10) MUSIC: Most every film, from the shortest short to the longest epic, is presented with live musical accompaniment. Making their Festival debut are the Berklee Silent Film Orchestra from Massachusetts, and returning are the Mont Alto Motion Picture Orchestra, Matti Bye Ensemble (winners of the Golden Beetle, Sweden's Oscar), and musicians Donald Sosin, Stephen Horne, Frank Bockius, Guenter Buchwald, and others.

11) ASIAN CINEMA: The Asian Cinema did not start with Kurosawa, martial arts films, or Bollywood. For a number of years, the Silent Film Festival has included a stellar example of early movie making from Japan , China or India. This year's film is Cave of the Spider Women (1927), a rare example of a magic-spirit film, a popular genre in the 1920s. The film set box-office records in China in 1927, but was considered lost until its discovery in Europe. 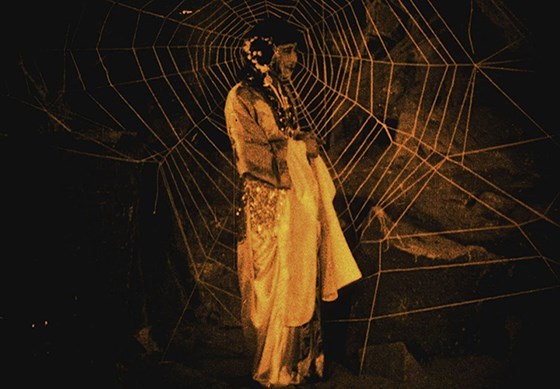 12) LOST LANDMARK: In 1913, a group of African-American performers led by famed entertainer Bert Williams gathered in New York to make a motion picture. After shooting more than an hour worth of film, the project was abandoned by its producers and left forgotten. Its unassembled footage, notably, represents the earliest known surviving feature with a cast of black actors. The Festival will present an hour-long assemblage of material that includes a two-minute dance sequence and a cutting-edge display of on-screen affection.

13) THE LAST LAUGH (1924): In his greatest role, Oscar winner Emil Jannings plays the chief porter at a prestigious hotel, a position affording him respect and dignity. His uniform is the emblem of his stature¬--and a source of great personal pride; thus, his subsequent demotion to washroom attendant is devastating. The film's pathos is bolstered by its technical innovation--F.W. Murnau's fluid camera is as beautifully expressive as Jannings's performance. So much so, the story flows without the need for intertitles. Expect to shed a tear or two, or three.

14) FOREIGN FILMS: Along with The Last Laugh (a German production) and The Ghost Train (an English/German co-production directed by a Hungarian), the Festival will also screen French classics Visages d'enfants (1925) and The Swallow and the Titmouse (1920), as well as the avant-garde Ménilmontant (1926), which Pauline Kael named her favorite film. There is also a very modern Swedish work, Norrtullsligan (1923), and a singular Norwegian effort, Pan (1922), an adaptation of Nobel Prize-winning author Knut Hamsun's famous novel.

15) ALL QUIET ON THE WESTERN FRONT (1930): We've all read the book or seen the movie. The Festival will screen the long lost silent version of the sound film, which some scholars think superior to the more familiar early talkie; that's a big claim considering Lewis Milestone's anti-war drama was the first to win Academy Awards for both Outstanding Production and Best Director. This opening night presentation features a new score and live sound effects created especially for the silent version.

16) FREE PROGRAMS: Every year, the Festival sponsors a free public program on film preservation. It's pretty interesting, and a sure bet you'll see things your film-buff friends wish they had seen. Rare, fragile, and once thought lost films are screened, and noted individuals working in the field speak: Bryony Dixon, senior curator of silent film at the British Film Institute, is bringing a treasure trove of footage about the Lusitania; Serge Bromberg of Lobster Films in Paris will show Maurice Tourneur's House of Wax (1914); and local preservationist Rob Byrne will describe reconstructing Sherlock Holmes.

17) AMAZING CHARLIE BOWERS: Mix a little slapstick with a little Rube Goldberg and a little Buster Keaton with a little anything-goes-fantasy and you end up with Charlie Bowers, a long-forgotten, idiosyncratic, Iowa-born filmmaker once championed by the French Surrealists, who loved Bower's inventive mix of live action and puppet animation. Only recently rediscovered, Bower's surviving shorts have now been beautifully restored. You haven't lived until you've seen Now You Tell One (1926), with its scene of elephants marching into the U.S. Capitol. 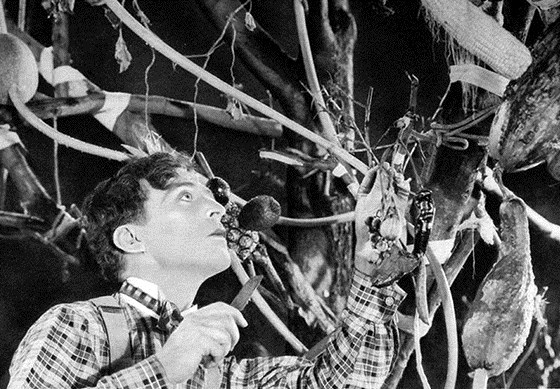 18) YOU'LL BE TESTED: Bruce Goldstein, director of repertory programming at New York's Film Forum, will host a trivia contest called "So You Think You Know Silents." Test your knowledge of the era in what promises to be a spirited quiz. Prizes will be awarded. And what's more, its free.

19) CASTRO THEATER: The Festival takes place within the confines of the historic Castro. Built in 1922, this grand neighborhood movie theater is one of the last standing picture palaces in the San Francisco Bay Area. Early on, Oscar winner Janet Gaynor was an usherette there.

The Silent Film Festival takes place May 28th through June 1st at the Castro Theater in San Francisco. More information, including a complete program of films and special guests, can be found at www.silentfilm.org

Thomas Gladysz is a San Francisco arts and entertainment writer and early film enthusiast. He is also the director of the Louise Brooks Society, an online archive and international fan club devoted to the legendary silent film star which he founded 20 years ago. Gladysz has organized exhibits, contributed to books, appeared on television, and introduced the actress's films around the world.