SAN PEDRO SULA, Honduras -- This is a city besieged by crime in all its forms: gang violence, drug cartel killings and rampant extortion compounded by a fear of authorities.

Honduras is now among the most dangerous places on Earth. No other country matches its rate of 86 slayings per 100,000 inhabitants a year, according to a 2011 United Nations Report. That is roughly 20 times the U.S. homicide rate.

And it's worse in San Pedro Sula, often cited as Honduras' most violent city, with a murder rate almost double the national average.

In this Wild West city, gangs such as the Mara Salvatrucha, also known as MS-13, operate with impunity. MS-13 was born in the 1980s among Central American-born inmates in the prisons of California and spread to Central America when members were deported back home by the U.S. They found fertile ground in Honduras and other countries with underfunded police forces and corrupt officials.

Hondurans say gangs have imposed an almost unchallenged reign of extortion, murder and drug trafficking on this city and others.

Mayor Juana Carlos Zuniga recognizes that San Pedro Sula is threatened by violence that authorities cannot control. And the city's location near Honduras' Atlantic coast and border with Guatemala have put it on key international drug trafficking routes.

"As a local government we don't have the necessary instruments to fight the well-defined and identified violence derived from drug trafficking that overwhelms us," Zuniga told The Associated Press.

One night recently, the Catalino Rivas public hospital in San Pedro Sula could have been operating in a country at war.

There were not enough stretchers for the 19 wounded who arrived that night, and the people who brought them in had to shift the patients about. Pools of blood on the floor went unmopped.

Natalia Galdamez, the doctor on duty, received three patients with gunshot wounds. They said a gunman suddenly appeared and shot them without saying a word.

"It's tough to believe. This was a paid hit. We hear the same story all the time," Galdamez said.

At a nearby taxi stand, a driver with 21 years of experience explained how each of the company's 35 cars has to pay $30 a month to a gang. He said the drivers have to pay the same amount in taxes to the government, but each year, not each month.

"Who do you think has more power, the state or the criminals?" said the driver, who didn't want his name used for fear of reprisals.

San Pedro Sula, Honduras, Ranks Among The Most Dangerous Cities In The World (PHOTOS) 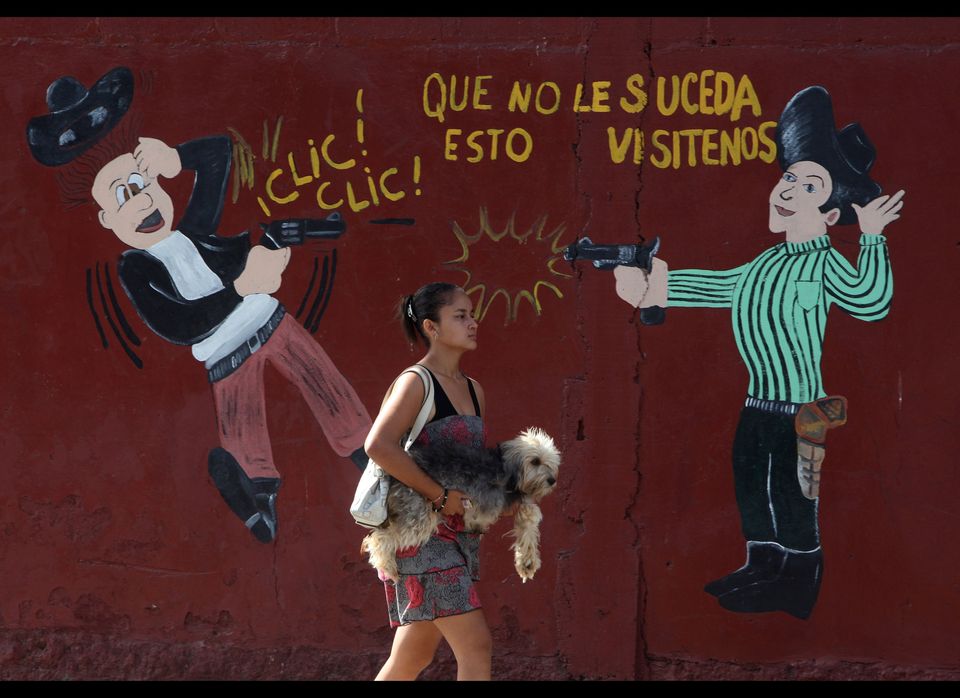 1 / 24
In this March 11, 2012 photo, a woman carries her dog past an armory shop in San Pedro Sula, Honduras. A wave of violence has made Honduras among the most dangerous places on Earth, with a homicide rate roughly 20 times that of the U.S. rate, according to a 2011 United Nations report. (AP Photo/Esteban Felix)
AP