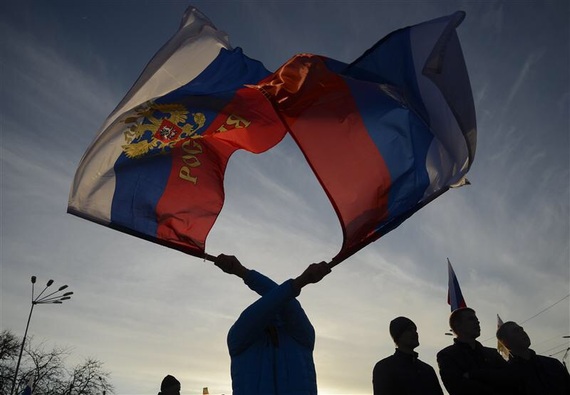 Russia's economy is suffering from dramatically lower oil prices, a rapidly declining ruble, interest rates that are an astonishing 17 % and western sanctions over Ukraine. We thought it might be interesting to share some of the effects that this economic tailspin is having on the daily life of Moscow citizens. Foreign direct investments are continuing to dry up, leaving Russia limited to doing business with big multinational companies, that are able to handle the losses imposed by the sanctions. Most of the smaller international players aren't in a position to be waiting out till sanctions are lifted, so they are simply leaving the market. Their place is taken by rivals from other parts of the world, mainly Asia. This shift shows in the vibe of the city. For example, walking into one of the top hotels of Moscow instead of European and American business people today you are likely to see Chinese and Indian. On average $5BL of capital is leaving russia monthly. Overall business done by Russia internationally contracted to the level of 2007. Any decrease in Russia's economic wellbeing directly affects a number of countries around Russia. Most of the expat employees are leaving back to their countries, which shows that the contraction in employment capacity of Russian economy. A number of countries of the former Soviet Union are heavily dependent on Russia through employment of their citizens, as well as subsidies and various types of economic support, Russia used to provide to it's "allies".

Smaller local businesses are most dramatically impacted by the sanctions and the collapse of ruble. Majority of them have cash flow in rubles and aren't able to absorb the increased cost of the foreign imports and declining tourism. Generally, holiday travel is being cancelled. Average people cannot afford to stay at foreign resorts anymore. Hotels in Moscow which used to be at full occupancy at this time of year have not only cut prices but are seeing much lower occupancy rates. Today you can rent room at a first class Moscow hotel with a view of Red Square for $200 which is a mere fraction of the normal price. All these trends inevitably create more unemployment and cause social unrest and opposition to current Russian government. Interesting transformation is happening in the consumer sector. Imported western goods are either gone from the shelves or the prices have sky rocked. This is true whether it be Ikea or Apple (the basic Iphone 6 is over $900). Imported food has vanished from the stores. As a counter-sanction Russian President Putin imposed a restriction on import of all western foods and other goods into Russia. On top of that Russian government recently came up with a law which states that from now on Russia is completely GMO free zone, restricting supply of many more food products into the country. As a result you dining in one of the fancier restaurants, which used to serve foie gras from south of France and the best Argentinian steak, you will likely see items from Voronezh or Kaluga, another region of Russia or Belarus, paired with wine from Azerbaijan. On the other hand this radical change in geopolitical position of Russia gave a tremendous boost to the local farming industry. Before Russia honored a lot of noncommercially viable food importing contracts that made local produce not competitive. Now that those contracts are discontinued, and sectors like agriculture and farming, that were in a perpetual decline for the past decade, are growing rapidly. As international funds are drying up and western companies are leaving Russian market, their place isn't left empty, but is quickly taken by either Asian counterparts or local competitors. Russia is transforming under the pressure of sanctions, finding ways to optimize and rebalance its economy in the face of new conditions.