Seven years after Wall Street gamblers wrenched the U.S. economy into the worst economic swoon since the Great Depression, the movement to make the high rollers pay some restitution to people and communities harmed by their profligacy is gaining stream. 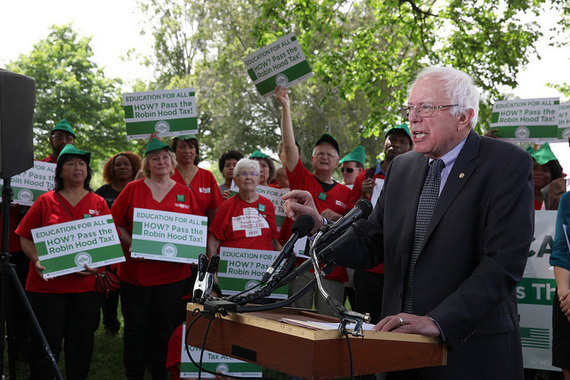 The bills are a culmination of an energetic campaign over the past four years by nurses, students, HIV/AIDS, labor and housing activists, religious and civil rights groups, and environmentalists, over 170 national organizations who have marched, rallied, petitioned, and raised their voices to demand Wall Street pay up to heal and rebuild the nation.

S. 1373, funded by the Robin Hood tax, would provide for free undergraduate college tuition fees for students attending public colleges and universities, as well as tackling head on the escalating crisis in student loan debt.

S. 1371, a straight Robin Hood tax bill, is a companion to HR 1464, the Inclusive Prosperity Act, introduced by Rep. Keith Ellison of Minnesota, with more than two dozen House co-sponsors. 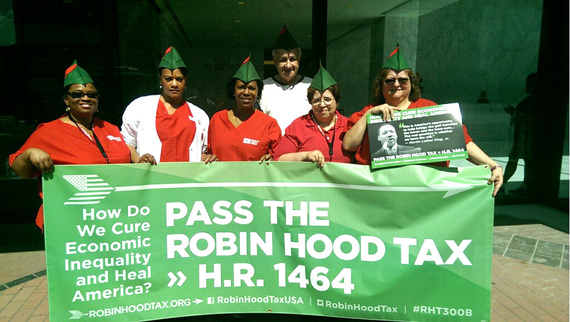 It would use the hundreds of billions of dollars raised every year for education, healthcare, jobs and other basic needs that are the hallmark of a more just, more humane, more civil society.

Why do nurses support these goals? Because we remain a nation of the haves and have nots, the 1 percent and the 99 percent, inexcusable poverty and unforgiveable human suffering in a nation of unimaginable wealth and resources. 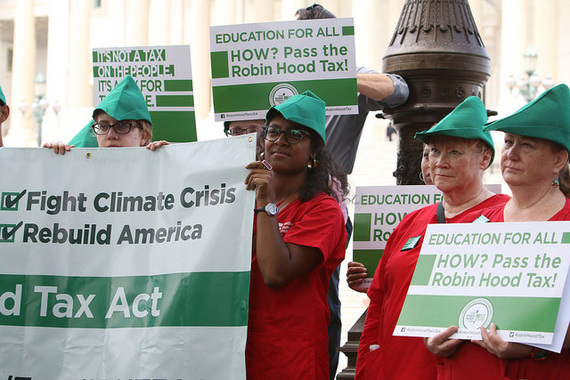 Nurses see the pain from the disparities and injustices of our society, and care for the homeless, the jobless, the families facing bankruptcy from medical debt, and the children harmed by toxic pollution or malnutrition. Nurses experience the anguish from preventable diagnoses where resources have been plundered by the banks and the billionaires, while so many are left behind.

Nurses see the increasing despair and crushing of the human spirit when people are denied opportunity, handcuffed by poverty and denied a meaningful pathway to a better, more humane, more just life.

How many Americans are working in low wage jobs because they cannot achieve a better life?

Or are devastated by an anchor of student debt, now pegged at nearly $1.2 billion, crippling their ability to live a better life following that education, even into their sixties. While other nations, including Brazil, Chile, Finland, France, Germany, Norway, Slovenia, and Sweden, provide their youth a free college education. 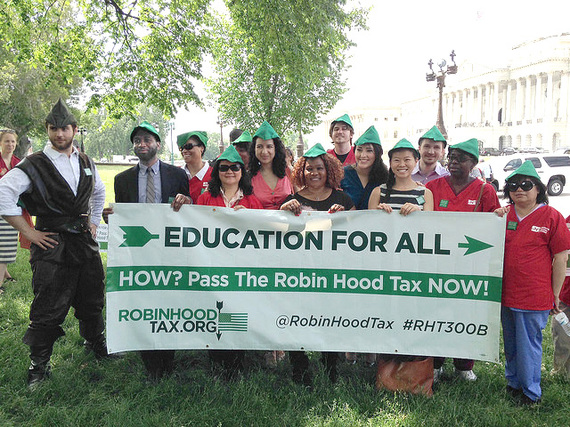 Nurses know that economic inequality is a major reason why the U.S. lags so far behind many other industrial nations not only in poverty and social injustice but in a broad array of health outcomes, from maternal and infant mortality to life expectancy.

Nurses know that caring for patients also means caring for our communities, our society, our nation. And they know how to start to fix the problem, with a tiny tax on Wall Street.

With a tax of just 50 cents on every $100 of stock trades - now largely untaxed, in stark contrast to the 8 or 9 percent sales tax on most every day consumer goods - we can genuinely provide hope that we can:

•Extend healthcare to all Americans
•Provide a means for good jobs for everyone
•Repair our crumbling infrastructure
•Eradicate HIV/AIDS and other global epidemics
•Feed and house our people
•Confront the environmental degradation and pollution that sickens our children and families
•Work to stem the climate crisis
•And ensure equal access to education for all.

A tax, not on the everyday people, but on the investment bankers , currency traders, and wolves of Wall Street who gambled with our pensions, our mortgages, and our futures, and put it all at risk. 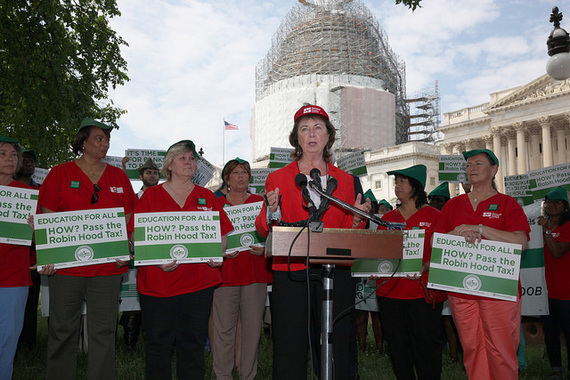 People around the world have already figured this out. Every major financial market has an equivalent speculation tax, including the biggest markets in Asia, and Europe, where Eurozone financial ministers are meeting in June to put the final touches on a Euro financial transaction tax.

By placing this critical issue in the table in the presidential discourse, Sen. Sanders has already performed a great service.

The genie is not going back in the bottle now, despite all the efforts from Wall Street and their acolytes in Congress and in the financial media to silence this irrepressible movement. The nurses, and the broad movement we have all built together are still just getting started.