When the Democratic candidates for president come together for their second presidential debate this Saturday, the question may arise -- as it did in the first debate -- as to what Bernie Sanders means when he says he is a socialist. But the distinction between "socialism" and "capitalism" is misleading here, for the real debate is about what type of capitalism the candidates favor, for none of them are old-fashioned socialists who advocate public ownership of major industries. There is, however, a far-reaching difference between the social democratic version of capitalism favored by Senator Sanders and the neoliberal version preferred by Secretary Clinton.

This difference is what was really beneath the disagreement that took place in the first debate about Denmark, which -- along with Sweden and Norway, the other countries mentioned in the debate by Senator Sanders -- embody the social democratic model: a type of highly regulated market economy that is characterized by strong labor unions, a generous welfare state, vigorous public institutions, and relatively high taxes and public expenditures. 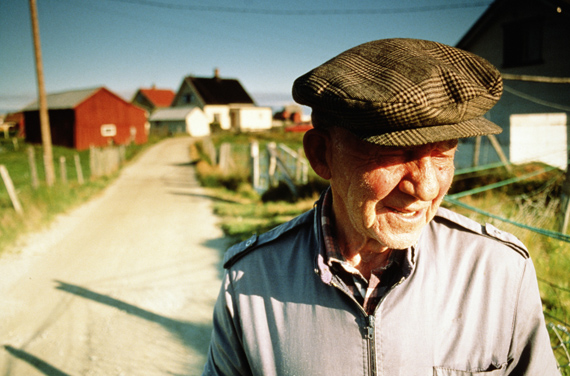 A man taking a stroll on Rost Island, Norway

In contrast, the model of capitalism favored by Secretary Clinton might be termed neoliberal: heavy reliance on market mechanisms (hence Obamacare rather than Medicare for all or even a public option), privatization of many services previously carried out by the government (hence extensive private contracting by the U.S. military), a less generous welfare state, a bias toward deregulation (hence the decision to repeal Glass-Steagall), and lower taxes and public expenditures (though it should be noted that all of the Republican candidates support an even purer and more extreme version of the neoliberal model than Secretary Clinton).

Senator Sanders captured a key element of the difference between the two models when he said in the first debate that "Congress doesn't regulate Wall Street; Wall Street regulates Congress." The degree to which concentrated corporate power dominates the political process is incompatible with the social democratic model, which is premised on the capacity of democratically elected government to regulate the economy in the public interest. An observer of European societies put the matter succinctly: In genuine democracies, the political institutions must shape the economy, not the other way around. 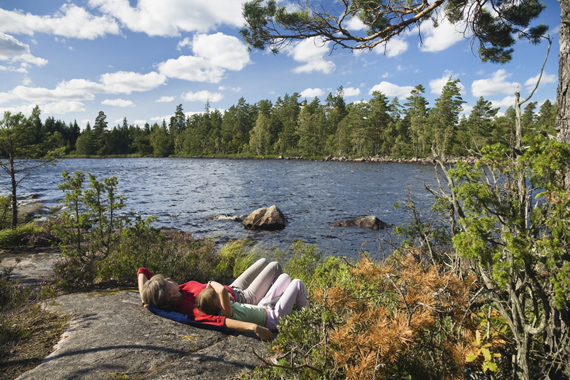 A woman and child lounge on a rock in Kalmar County, Smaland, Sweden

As a way of comparing the performance of the two models, I have put together 12 graphs that describe how the United States and the three major embodiments of the social democratic model -- Denmark, Sweden, and Norway -- are doing in several important domains including health, crime and poverty. Viewers of Saturday's debate may wish to keep these differences in mind as they watch the discussion between Senator Sanders and Secretary Clinton. Here are the graphs comparing the United States to Denmark, Sweden, and Norway: 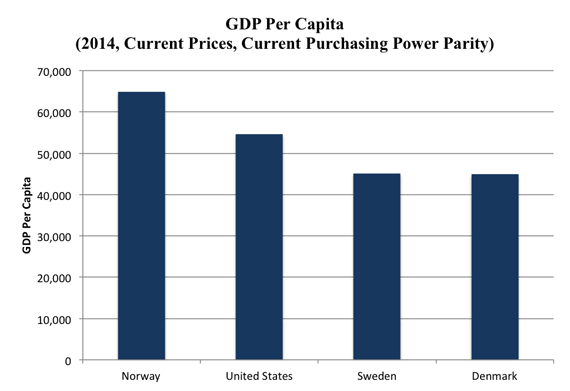 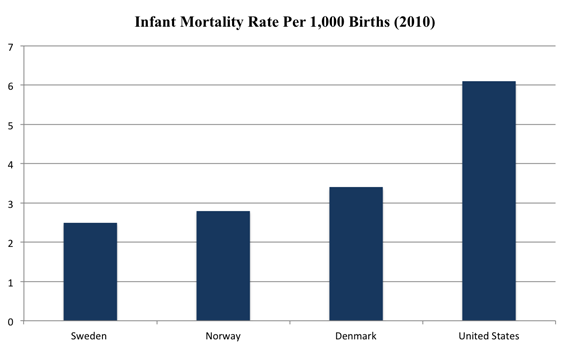 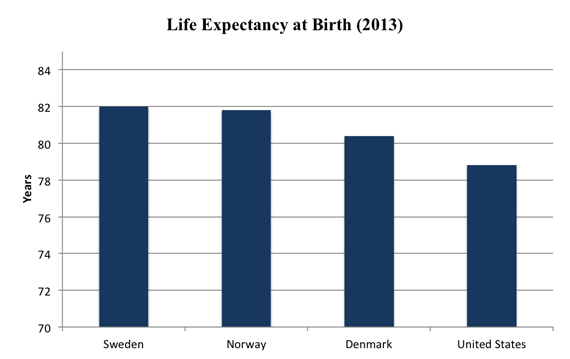 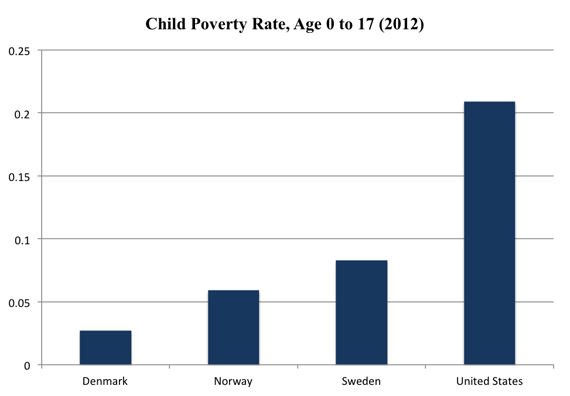 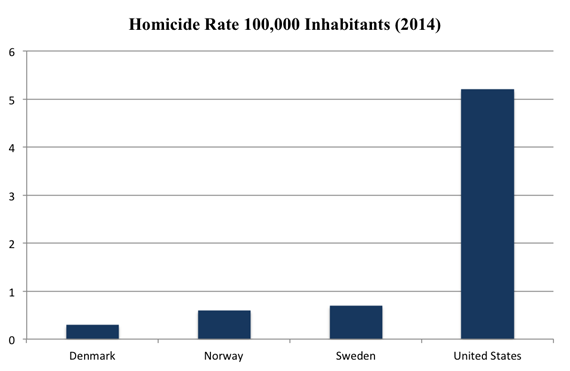 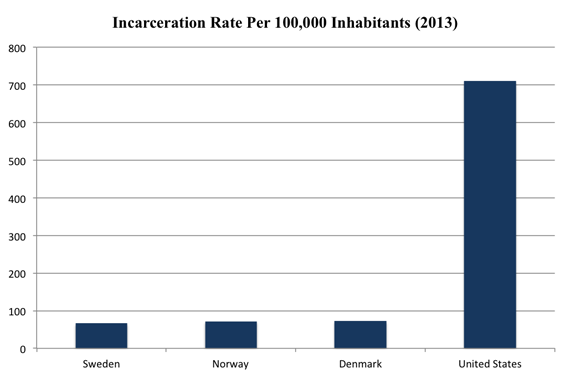 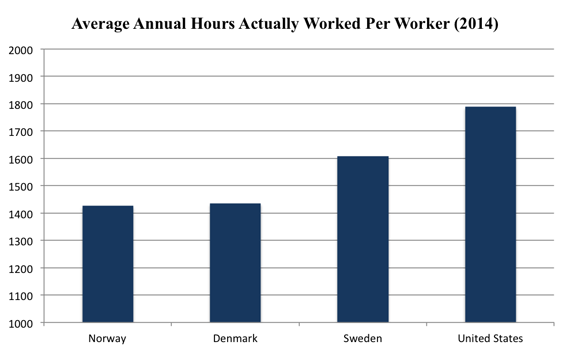 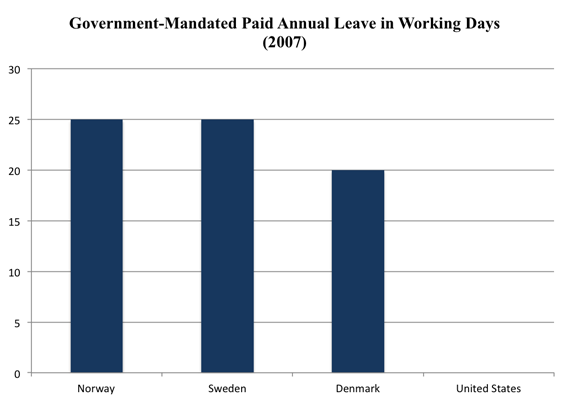 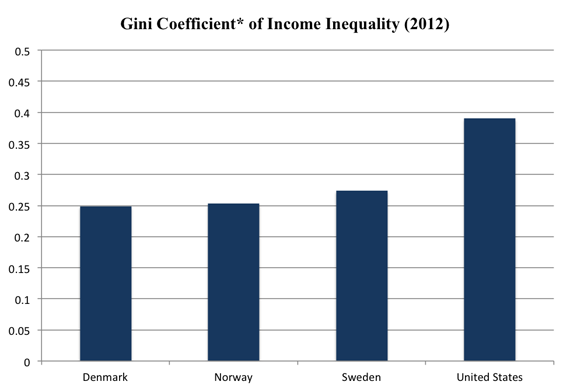 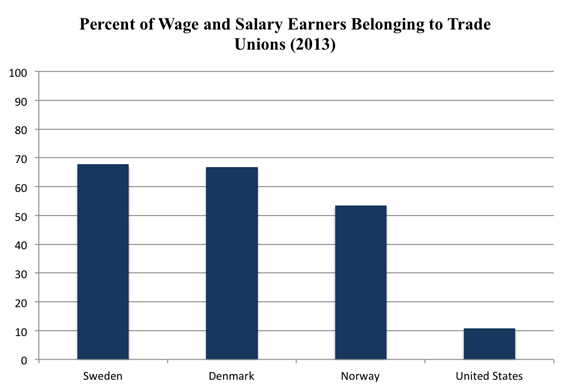 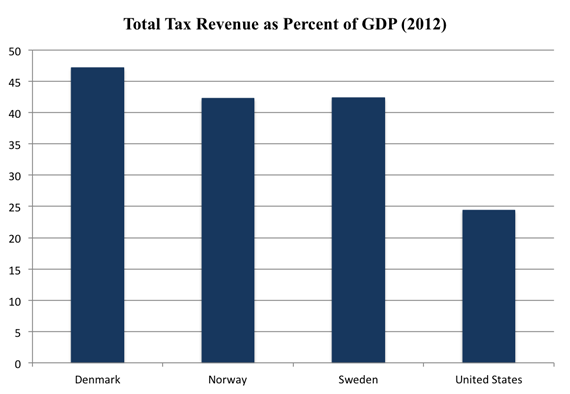 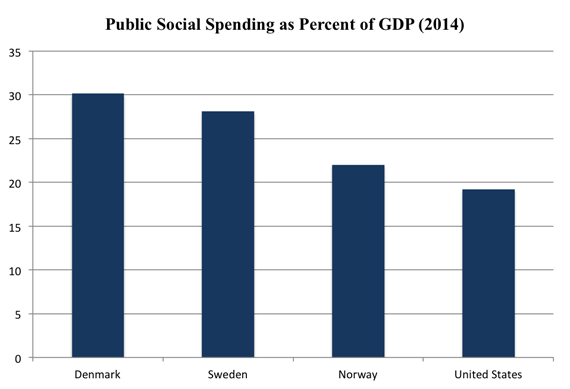 Several patterns emerge from these graphs. First, both the social democratic and neoliberal models can generate economies that are competitive globally and successful in producing high levels of material wealth.

Third, capitalist societies vary tremendously in rates of public expenditure and taxation; the United States is at the low end and the Scandinavian countries at the high end.

And fourth (and most critically), the social democratic countries are far more successful in using their material wealth to promote the health and well-being of the whole society. This pattern, it is worth emphasizing, is not an aberration; none of the other societies most commonly considered to embody the neoliberal model -- the United Kingdom, Australia, Ireland, New Zealand and Canada -- reach the levels of social well-being attained in Scandinavia, though some come closer than the United States. 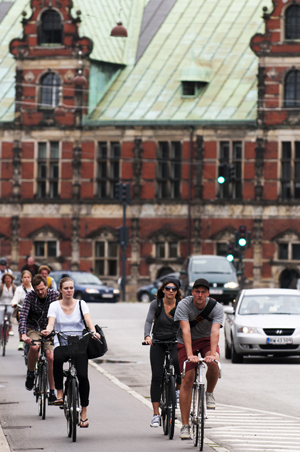 The United States, as Secretary Clinton rightly noted in the first debate, is not Denmark. Nor, given its very different history, is the United States likely to adopt the social democratic model or, for that matter, the model of any other country. But those watching the Democratic debate this Saturday -- and Secretary Clinton herself -- could learn a great deal by examining the policies and institutional arrangements that have made Denmark and its sister social democracies in Sweden and Norway so much more successful in securing the well-being of their citizens than the United States.