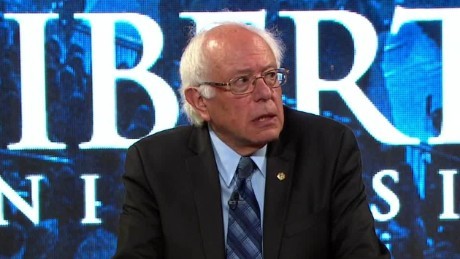 On Monday, presidential candidate Sen. Bernie Sanders spoke to a self professed "conservative Christian" group. We live in a time of perpetual war and Sanders -- who sometimes touts his 2002 vote against authorizing the invasion of Iraq -- couldn't bring himself to raise the subject of war with people who profess to be followers of the Prince of Peace.

Sanders spoke at Liberty University, founded by Jerry Falwell on Monday, arguing that despite their differences, they both should work on economic inequality (video and transcript*). And it was certainly important for someone to talk to people at Liberty University about the idolatry of money.

But NPR accurately reported that Sanders' reception "was pretty muted except for this one moment. It was after the speech, and the school's vice president was conducting a short Q and A with Sanders using questions that the students had submitted. And he asked a question about abortion. And in short, the question was, how can Sanders advocate for the economic needs of vulnerable children while not supporting the rights of the unborn.

And when the question was read out loud, the students started cheering, and there was this big standing ovation. It was by the far the biggest applause line of the whole event, and that was for the question. Sanders pivoted on the answer to talk about the Republican budget. And given his support for abortion rights, there wasn't really any way that the students were going to be satisfied with his answer.

Sanders not engaging in a more meaningful way on this allows a continuation of mutually assured stagnation. Liberals who defend abortion rights and those who oppose abortion rights can feel mutually superior to each other while continuing the status quo.

Sanders received kudos from all round for speaking to an audience that he disagrees with on many issues. But the fact that Sanders is unwilling or unable or simply insufficiently interested in issues of war and peace to raise it in this setting totally deforms our national dialogue.

No one is more interested in meaningful dialogue between left and right than I am. I founded a website and voting strategy on the premise that there's an anti-establishment center -- VotePact.org/about -- and that a solution to our current predicament would be for disenchanted Democrats and disenchanted Republicans who know and trust each other to have a real dialogue and pair up and vote for the third party or independent candidate(s) of their choice, thus siphoning votes in twos from the establishment parties.

And, as someone who has spent a fair amount of time with self-described Christian conservatives over the course of my life, I think there's a way -- with a lot of work and dialogue -- to make a real change.

But that dialogue is constricted and twisted when the stated policy position of the "progressive" in the dialogue is not meaningfully pro-peace and seeks a more dominant Saudi Arabia in the Mideast. See here and here.

I'm critical of people who are sufficiently certain in their own worldview that they assert and seek to use the power of the state to coerce women into not having abortions they feel they need or want because they know that a fetus should be afforded personhood.

But how can we have a meaningful discussion about the preciousness of life while our country regularly bombs people thousands of miles away? How can we pretend to care about human life when death is an instrument of our foreign policy? This largely comes about because in a deep way, Iraqis and Afghans and Yemenis and Palestinians and many others are simply not afforded the status of real personhood by our body politic.

There are of course people who espouse a "seemless garment" -- who are anti-war, anti-abortion rights and anti death penalty. They are almost universally ignored by most everyone else.

I honestly don't know if a fetus is a human being and I am skeptical of anyone who claims with all certainty that they do. But I do know the people in Iraq and Syria and Afghanistan and Palestine and other victims of U.S. foreign policy -- which sets the violent standard around the world -- are human beings.

In Sanders' world view, which so far seems remarkably uncaring to people who are not U.S. citizens and is therefore quite xenophobic, they are not afforded meaningful consideration in his policy pronouncements because they don't carry a nice blue U.S. passport.

This is in contrast to the newly victorious Jeremy Corbyn, who speaks in quite clear terms against wars -- past, current and likely future wars:

Let us be a force for change in the world, a force for humanity in the world, a force for peace in the world and a force that recognizes we cannot go on like this with grotesque levels of global insecurity, grotesque threats to our environment all around the world without the rich and powerful governments stepping up to the plate to make sure our world becomes safer and better. And those people don't end up in poverty, in refugee camps, wasting their lives away when they could be contributing so much to the good of all of us on this planet. We are one world, let that message go out today.

Most of the attendees at Liberty University likely don't comprehend the humanity of the people in the Mideast because they proclaim their Islamic faith. Or most of them do. Or their humanity is portrayed as one in need of the faith the attendees of Liberty University profess. But of course, the bulk of "Christian conservatives" are quite Zionist in their outlook. That is, their presumed affinity for Christian communities in the Mideast, be they in Palestine or Syria or where ever, is insufficient for them to overcome the imperial impulses of "Christian Zionism." This is in part because they haven't had a meaningful dialogue with enough people from the region.

It was interesting to see the proclamations by the Liberty University MC for the event, David Nasser (an Iranian American Muslim convert who now proclaims his Christianity) against racism in the Q and A with Sanders, while he acts and is treated rather subserviently by Jerry Falwell Jr. -- the son of the great founder who himself is presumed to be a great man.

One would think that in terms of foreign policy, the one thing that a liberal like Sanders and those on the Christian right would agree on would be that the Saudi regime, which has fostered Wahhabism, should not be what we rely on to make the region better. But there Sanders was, using his standard talking point about the Saudis stepping up before that audience.

The imperial assumptions from liberal and conservatives are therefore silently accepted and therefore re-enforced, even as those all around applaud the great dialogue they are having.

* A non-correction: at one point in his speech, the transcript from the Washington Post incorrectly has Sanders saying: "And that vision is so beautifully and clearly stated in Matthew 7:12, and it states, 'So in everything, do to others what you would have them to do to you, for this sums up the war and the prophets.' That is the golden rule. Do unto others, what you would have them do to you. That is the golden rule, and it is not very complicated." In fact, what Sanders quoted Matthew, which states that "this sums up the law and the prophets."

But, indeed, it is not very complicated. Now, if only Sanders and self-professed Christians would work toward applying it to our global policies.

Sam Husseini is communications director for the Institute for Public Accuracy and founded VotePact.org. His personal website is: husseini.posthaven.com. He's on twitter: @samhusseini.