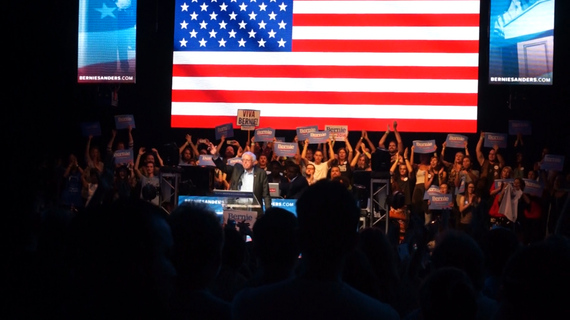 Tuesday night's first televised Democratic debate is being heralded as a victory by both the Clinton and Sanders' camp, and for good reason. Hillary Clinton was able to shine as a candidate of experience and confidence. For Sanders the moment in the mainstream media spotlight was long in coming and well played.

But there is one significant difference between the two candidates that is not being discussed by the press. And it's why Sanders won the Debate Tuesday night, and possibly the Presidency.

Without Sanders throwing his hat in the ring of this election cycle, the Democratic campaign would have likely been another series of corporate-backed big-donor supported candidates, discussing issues tacitly and discreetly agreed upon by the big donors' comfort factor. Those topics that make the monied elite uncomfortable, taxing the rich or regulating their interests for example, as always, would not be discussed. This ongoing pressure of money controlling the message, the contact point between the candidates and big business, similar to the two sides of an earthquake fault, where millions of pounds of force press against each other silently and secretly for years, under the feet of an unaware public, was thought to be an unbreakable seismic lock, like a force of nature.

When Sanders entered the Presidential race and began stating his intentions to save the middle class, rescue the poor and restore the economic imbalances in this country by taxing wall street, calling for free tuition to public colleges, break up the big banks to battle income inequality, called for prison reform and the support gay marriage, he dynamited that fault line between money and politics and caused an earthquake in the process.

The 'Bernie Epicenter' as the announcement of his candidacy could now be called, sent shock waves into the election process. Because Sanders' fearless positioning on multiple difficult issues, forced his opponents to respond. His refusal to go negative about his opponents was another surprise, forcing the conversations about his competitors to remain adult in tone. His moment at the debates when he paused after Clinton's response to her email question and said:

"Let me say something that may not be great politics...but the Secretary is right. And that is - the American people are sick and tired of hearing about your damn emails!"

The support for his colleague brought laughter and applause, was what a normal person does in a discussion, part of his drawing power I believe, and demonstrated that opponents with disagreements can still be thoughtful and supportive of one another.

Sanders effect on the debate therefore needs to be seen as the unusually powerful presence that it is. It goes far beyond his performance, which was commanding and good natured. But rather it speaks to how he set the agenda itself. Sanders forced the content of the debate around issues he has been talking about to his supporters for decades, and most recently to the large crowds he's been drawing for the past few months. Amazingly most of it has been off the mainstream media. The same media that has been trying to write him off.

It's refreshing and astounding to think that in just these few short months, these topics, which would never even be uttered out loud by Democratic or Republican candidates on a national stage are now the expected laundry list of issues that must be addressed, because every knows Sanders is going to bring them up, and as soon as he's done stating how he'll support and vote for it, the spotlight will turn to everyone else so they better have their answers ready. Bernie Sanders won not only the debate, but the moral high ground by bringing issues, first and foremost important to the American People center stage again, and not just the issues supported by corporate media and corporate backers who decide what and should not be discussed.

Sanders took a victory lap the next day at a fundraising event at the Avalon Auditorium in Hollywood Los Angeles, where Councilman Gil Sedillo, fresh off a victory of declaring a sate of emergency about the homeless situation in Hollywood, introduced Seth McFarlane, who introduced Sanders. McFarlane said:

Since I was young I always looked to the candidate who takes science seriously. When did he win the debate? When he answered what was the greatest national security threat - climate change. He's the only one who seems to understand the magnitude of the problem.

Sanders took the stage to cheers and starts talking about the issues he cares passionately about, the feeling in the auditorium is electric as he speaks to the problems directly relating to the middle class and poor of this country, by far the largest population base of voters.

He proudly tells us that the campaign raised $2 million the night of the debate (his campaign has now updated that number to $2.5 million). He reminds us that most of his donations to his campaign in the form of $35 from average Americans. Sanders proclaims he has no billionaire support, doesn't want any, doesn't have a super PAC and intends not to, to the cheers of the crowd. His policy points are all met with cheers:

It's an interesting comment in the broken legal system that with so many people in jail, none are bank executives.

We've had public education for over 100 years in this country, it's time to include colleges. How do we pay for it? A tax on wall street speculation. My Republican friends think it's a pretty far out idea. It's really not.

Republicans love low turn outs, then win when turn outs are low. If I'm President, I will make it clear in all 50 states that if someone is 18, they are registered to vote.

When I was Mayor I worked with the police. Most are good people and hard workers. They have a very difficult job. But if a cop breaks the law they have to go to jail.

When Sanders announced his candidacy in May of this year, the media's amusement and disregard were palpable. When George Stephanopoulos on ABC asked Sanders point blank;"Are you worried at all that your race might hurt Hillary Clinton without helping yourself?" Sanders simply said; "Nobody thought I'd become Mayor of Burlington, Vermont, few people thought I'd beat an incumbent Republican to become a United States Congressman from Vermont...and people weren't sure I could beat the richest person in Vermont to become a United States Senator, so I would say; don't underestimate me."

To date Sanders has been the candidate to regularly draw tens of thousands of supporters to his rallies (more than the other four candidates combined) and raised the most contributions from small donations, enough to rival Clinton's campaign war chest and easily outpace the remaining three candidates fundraising combined. He was the top trending candidate on the three major internet platforms, Facebook, Twitter and Google, during the debates and continues to draw more support.

I respect Hillary Clinton, people are allowed to change their minds, but when several changes happen weeks before the first public debates it's always suspect. They are positions she hasn't taken, and would not be taking now if it were not for Sanders dominating power and issue management over the course of the summer and fall that has forced her hand.

The only candidate not to have a super PAC, is the candidate to watch as he continues to expand his base and fund raise across the country.

Sanders closed his event with a populist call to power, not unlike Kennedy's call "Let us not seek the Republican answer or the Democratic answer, but the right answer,' when Sanders says:

Real change can happen, when we will not allow them to divide us up by the color of our skin, by whether we are gay or straight, by whether we were born in America or not in America, by whether we are a woman or a man. That is how they win. But when we stand united fighting for our kids and our parents, by the millions, making this political revolution, there is nothing we can not accomplish. 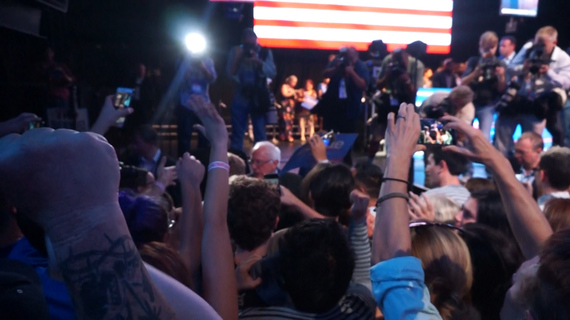 Pundits now think that even though he performs at the top of each poll, that his base is too narrow to be elected President. They forget they didn't think about him at all when he started and now they are forced to. I think we shouldn't underestimate him.

For more information on Bernie Sanders