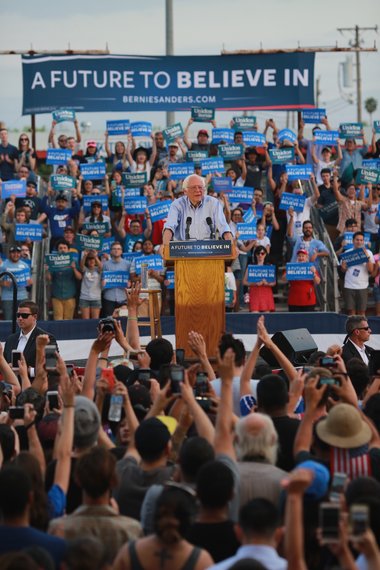 Here's an English-translation of El Molino Online's week in Review, published in Spanish for a mostly international Spanish-speaking audience.

A Bernie Sanders rise in the California polls, a state where the socialist has mobilized enormous resources as the Democratic primary campaign winds down in the US, is another problem in a long and debilitating list faced by Hillary Clinton, who despite not having the delegates to nail the party nomination has already been anointed as such.

This week we saw that Hillary's problems are political: Her campaign's inability to "dispatch" her only opponent, a senator who proudly wears the socialist label and who started the campaign totally lacking name recognition. His support was minimal among colleagues; his coffers were empty -- nobody took him seriously. In just over a year, he's become in a "rock star" - particularly among the youth (under 30.)

The California primary will be held on 7 June, and polls are showing the disappearing of what once seemed Hillary's insurmountable lead. Now, anything is possible in that state with a treasure trove of 548 delegates, in an open primary, where both Democrats and Indepedents can vote.

The size of Mr. Sanders's rallies in southern California rank amongst the largest during this primary season.

Hillary Clinton's problems are also related to ethics. One of the many scandals surrounding her, that of her emails during her tenure as Secretary of State, produced this week a scathing report. In a few words, concluded a review by an internal watchdog, Hillary Clinton and her subordinates knowingly violated the State Department's internal norms, endangering secure data. And she refused to cooperate in the investigation of the matter.

The problem is dynastic. The name Clinton brings memories of questionable ethics, personal issues (sex) exposed in graphic details. Whether the accused was Bill Clinton, Hillary was there. She's even attacked the women who claimed to have had affairs with her husband.

Also, the problem is the solid perception that there are no barriers between the political and the personal -- in a millionaire world of influence, bankers, foundations, secret speeches.

The problem is that more people hate Hillary Clinton than they like her.

The problem is Donald Trump, a less than orthodox candidate, who says whatever comes to mind whenever. With the field clear, and as the republican candidate, he has started to call Mrs. Clinton "Crooked Hillary"). He has said Bill Clinton's sexual conduct is a valid campaign issue. He even repeated rumors about the suicide of Vincent Foster -- to the delight the conspiracy theory crowd.

For the USA all of that is a return to the 1990s. A Déjà Vu. And that in itself is a major problem: While society wants to look forward, the Clinton campaign forces a look back.

These are some of the problems facing Hillary. And they could get worse. If she has to testify to the FBI on the email scandal. Or if her political enemies manage to get an indictement.

Top it all with the weakening embarrassment for her candidature at the July convention if Mr Sanders's supporters come in with a list of demands, supported by a substantial amount of votes, delegates and victories.

Another week that flew by in the US.

You can read this and a lot more news and commentary in Spanish at El Molino Online.