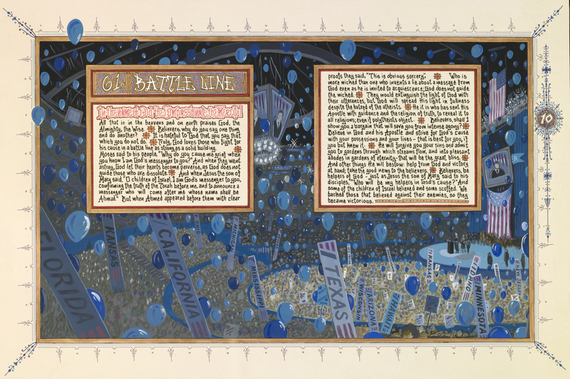 Southern California has a thriving and eclectic fine arts scene, and the husband-wife team of painter Sandow Birk and ceramicist Elyse Pignolet are two of the region's finest visual artists. Birk and Pignolet are notable for capturing the zeitgeist of California and the nation in clever and unique ways. Birk's In Smog and Thunder: The Great War of the Californias, which exhibited at the Laguna Art Museum in 2000 and Sonoma Art Museum in 2001, depicts an imaginary war between San Francisco and Los Angeles. The Rise and Fall of Los Angeles provides a grim and apocalyptic view of the City of Angels. Pignolet created the beautifully crafted "Paleta Cart," which was part of the Laguna Art Museum's 2013 Faux Real exhibition. Together, they have produced wondrous murals at locations such as an LAPD station in Boyle Heights, Calif., and the Avalon, Calif., lifeguard headquarters.

"I try to make works about topics that I'm interested in and that are important to me," Birk said. "I want to make artworks that mean something and have something to say about our times, and that I have an opinion about."

Among his diverse and extensive résumé, Birk's current exhibition, American Qur'an, may be his most provocative, powerful, and brilliant collection to date. The pieces are on view at the Orange County Museum of Art (OCMA) in Newport Beach, Calif. An accompanying hardcover book by the same name, featuring a preface by notable religion scholar Reza Aslan, is available through Liveright. 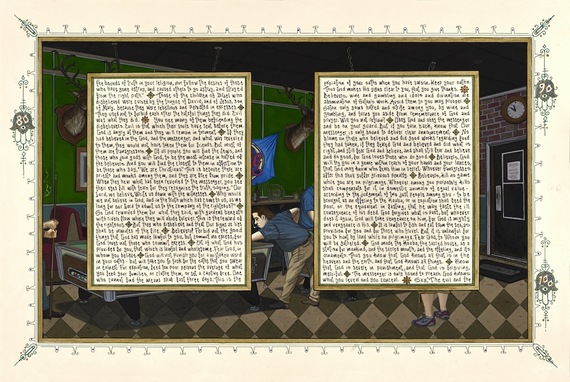 How did Birk, who is not Muslim, gain an interest in the Qur'an, Islam's holy book? "Through my surf travels, I realized that I had spent considerable time in Islamic parts of the world--I think I've made at least 10 extended trips to Islamic regions--and the experiences I had and the people I met and what I knew about Islam was completely different than what I was being told by the media," he explained. "So at some point I just decided to stop listening and to see what Islam was about for myself, and I just went out and bought a copy of the Qur'an and started reading it."

The exhibition, a project that took Birk nine years to complete, features more than 300 gouache paintings on which he hand-transcribed every word of the Qur'an using an L.A. graffiti-based font. His illustrations provide his vision of how the Qur'an verses apply to the contemporary Western World. 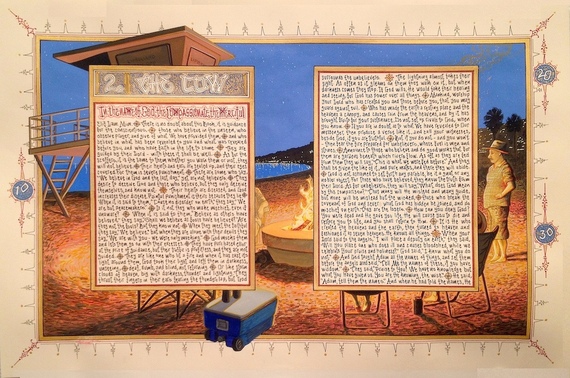 "I am very aware of the importance of calligraphy in traditional Islamic arts, so I very much wanted to use an important--or very American--style of lettering, and what could be more American than graffiti?" stated Birk. "So I came up with a sort of simplified, more legible, graffiti font based on tags in my neighborhood." He added that his inspirations for the project came from Persian miniature paintings and albums, illuminated manuscripts, and ancient Qur'ans.

The illustrations are alluring and original. One integrates surah 21 of the Qur'an with Hurricane Katrina. Another incorporates surah 12 with a mass Immigration and Naturalization Service arrest scene. The fact that Birk is not a trained Islamic scholar adds to the exhibition's ingenuity. His perspective is unique and fresh. 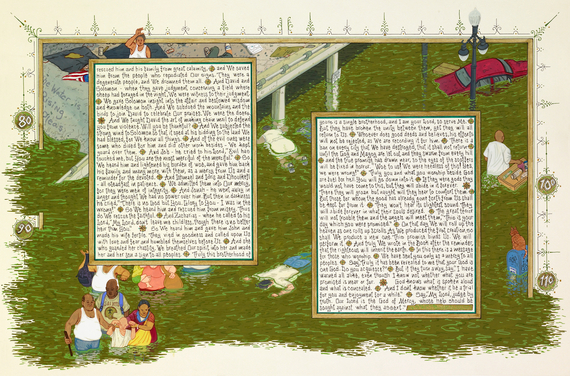 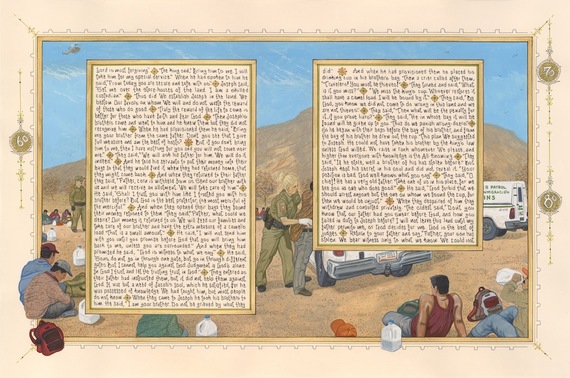 In describing his creative process, he shared, "The text would take a long time, and over the course of time working on it, I would ponder and come up with ideas for the imagery. The borders, decorations, and format of the pages and the traditional verse marking and numbering system all come from historical Quranic traditions--including the colors of inks, the headings, palmettes, etc."

Orange County, Calif., is notorious for being the site of a hate-filled, xenophobic rally in 2011. How has the right-wing county received a series of paintings depicting the Islamic holy book? "The museum staff has received positive and supportive comments from the public--both for the exhibition as well as the public conversations and programs offered in conjunction with the exhibition," stated Todd Smith, OCMA's director and CEO. "People often look to cultural institutions to better understand the world, and we are pleased to have been able to serve this role."

Perhaps the idea of a non-Muslim Southern California surfer and prominent visual artist immersing himself in a nine-year project on the Qur'an is not so far-fetched. KCET's Robert Petersen recently wrote about the potential Islamic origin of the name California. Birk's work, therefore, is an ideal representation of California's strong multicultural heritage.

The exhibition runs through February 28.