But trust the Lebanese, under the direst of circumstances, to crack jokes and serve up mordant comments on social media about the unprecedented tempest that swept over the whole Middle East. 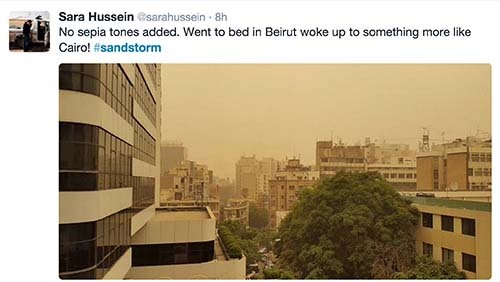 Residents of the Arab Gulf region are more accustomed to such inclement weather so it's been particularly hard on the Lebanese whose summers are usually cooler and more humid on the Mediterranean side of the map.

Not to be outdone, news website NOW posted a picture on Twitter of a man explaining what Lebanese were going through. 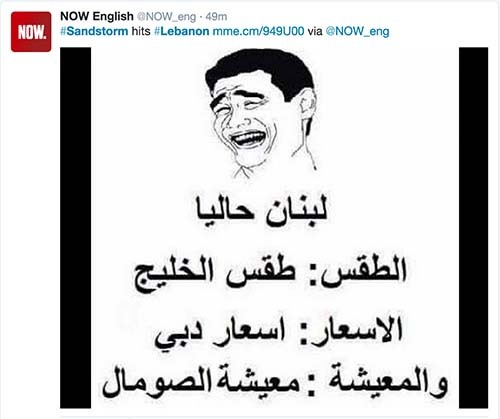 One caption on a tweeted picture of a man whose face is covered in sand reads: "I opened the window by mistake." 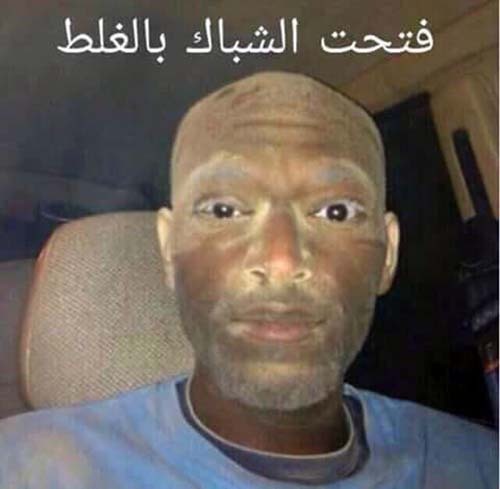 Screen shot of "I opened the window by mistake."

In the northern port city of Tripoli, someone shot a picture of young men smoking hookahs through surgical masks that medical authorities had advised citizens to wear when venturing outdoors. 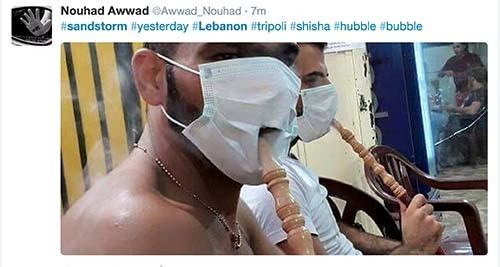 The daily Annahar jumped in with a tweeted picture of a wedding party where the married couple and loved ones donned masks.

Screen shot of wedding with masks

Blogger/journalist/activist Mahmoud Ghazayel in a play on words transposed Arabic letters on a hazy picture of the Raouché rock to read "Beirut El Ghabriya" (Beirut the dusty), instead of "Beirut El Gharbiya" (West Beirut) where the landmark rests planted in the sea. 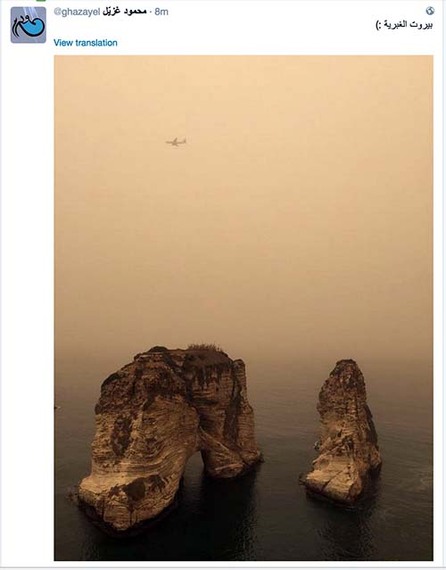 On a serious note, according to various reports, the weather system that hit full-force on Monday is the worst in decades, some say in Lebanese recorded meteorological history.

It's already killed half a dozen people and sent hundreds to hospital with cases of asphyxiation or shortness of breath. It's expected by local meteorologists to start receding on Thursday.

But other weather forecasts say it could drag until next week.

The Ministry of Health has been on full alert, broadcasting various advisories on how to deal with this abnormal situation.

The cabinet ordered all government offices closed on Wednesday and the Ministry of Education said schools would also have the day off.

The sandstorm comes at a critical time when thousands of Lebanese have been demonstrating, going on hunger strike - at one point occupying a government ministry before being forced out - and clashing with authorities to protest a dysfunctional state that has failed them.

The tipping point was a collapse of the trash removal and disposal mechanism that led to a protest campaign called #YouStink.

Another group dubbed #WeWantTo HoldAccountable followed suit as did other civil society organizations and angry citizens fed up with the country's deep-rooted corruption, sectarianism and an entrenched feudal political class. 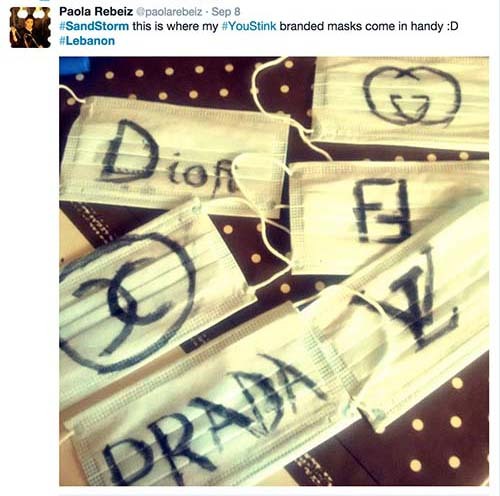 Tweep Paola Rebeiz posted a picture of surgical masks she used during the demonstrations where tear gas and water cannon were used on protesters to show their usefulness during the sandstorm.

The storm hasn't spared any region.

Coastal cities like the capital are usually hotter and muggier than the mountain towns and villages where one doesn't usually need air conditioning. But this has been the exception to break the rule.

I live in the mountains overlooking Beirut where visibility to the sea has been obstructed for three days. Normally it's a stupendous view. 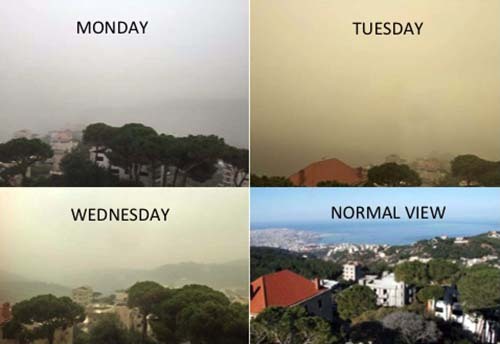 Sandstorm with a mountain view (Abu-Fadil)

The nasty equal opportunity aggressor has also added to the woes of Lebanese who must endure chronic power shortages.

Electricity cuts are the norm and almost everyone pays two bills - one to the government that provides a skimpy supply, and another to private generator operators who supplement the shortfall.

Despite the endless problems, writer/blogger Marina Chamma tweeted a picture of what somebody scribbled on a sand-covered car window: "Lebanon I love you any way you are." 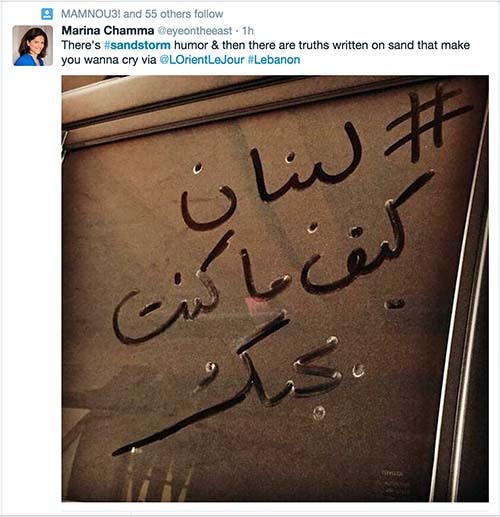 Screen shot of "Lebanon I love you any way you are"