Sandy came, and before she arrived, it was all about Me. Me in my house. Me in my day job. Me, my aspirations and my battles with my lessons. Me, not doing what Me like to be doing. Me and my senseless emotional life. There were so many Me's, I forgot I was only one.

I called my ex and in a conversation with so many starts and stops, like a storm could not be stopped, the explosion came, not filled with regrets, but with a deep, downright pathetic need, as if love could live in it, for someone to come through the door and make everything okay.... Well, he laughed, and his point was made with a poem he sent me:

But the reality was that right then, in the wake of Sandy, the extension of wilderness in my life was the plants I had very carefully placed by my window. Because after the last storm, after walking in the mud of my own making, after eight months of nomad living on the couches of New York City, after singing new notes in new neighborhoods, dancing to music of off-off tribes, and drinking whiskey till dawn, in the attempt to find new company for my new form all the while counting pebbles on the street to control the combustion of my own being before my lessons arrived. After an explosion of a world and an implosion in my heart... Shelter. If before I was Taking a Walk on the Wild Side, now I had arrived in a place where it was safe and warm, and my new tune was shelter, I had found Shelter from the Storm. White walls, big windows and sunlight was beaming. I walked to the center of the room and lay on the floor. I was startled at the sound of my voice, "I did it again!" It was a whisper, a breath, an exhale, a staff in the quicksand of my ways. My own war cry, it felt familiar, it felt like home. From the center of that room I started my own private operation, moved by homemade coffee, and a quietness that could almost be mistaken for silence. My new motto was lightness, white was my color of choice, plants were my breathing companions and books my guides. In that way, the blanket of my life unraveled. The more still I became, the more I got informed and day-by-day I grieved and purged the things that once were. Some days I felt empty, others I felt full. Stillness got shaky and uncertain as my love and my guilt kept switching places between righteous war weapons and courageous acts of non-violence. Peace was found in the mundane: the alarm clock, the clock punching, the clock ticking time away.

Higher ground was limbo, the place where you stand and say, "Now what?" I had a thousand possibilities of newness yet my fear of falling made me hold on to the numbness of normalcy for dear life, as if I let go of anything else I would disappear into a black hole and lose myself completely. I talked myself into the things that should be no more, and so the grind of winning my bread and butter became sacred, familiar faces became family and paying bills and taxes became my goal. As my eyes wandered in a crowded subway to the pages of books by the ones who had done no wrong by me, my mind kept counting my accomplishments like medals of a game I never wanted to learn how to play. In the journey of mending my wild heart...I had lost it. If I was a bird that stopped on a bough, I surely had forgotten how to fly. And the thought of dropping frozen dead on the eve of a storm scared the shit out of me.

To be here was to know the secret of all the points of imprisonment in my life, alone or with company, that place where your heart and physical world don't agree, where the mind wonders, life comes to a stand-still and our desires get the best of us. Our fingertips holding us on the edge of the abyss and if our past comes to give us a hand, we will take it, crawl ourselves out and say, "What the hell was I thinking, babe? Let's go back home." But I was far too deep to get out, we were far too sober to binge ourselves stupid and forget how much had been, there was no way back to my past and there was no more space in this limbo. I had a storm brewing inside and with one coming to match, I had my wild heart and my physical world in agreement, and so with certainty I whispered, "Let it rain, let it be, let it all fall on me." 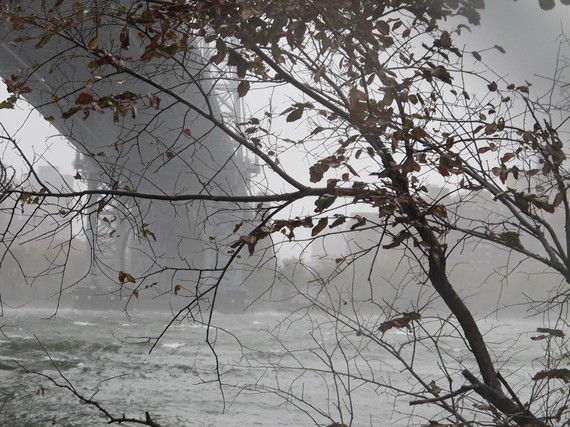 I walked down to the East River; black trench, hoodie underneath, cool boots, cigarettes, a camera. From the sight of the other wanderers, I fit the part. In every neighborhood in New York, like birds, types flock together. Mine is no different. We are the rock 'n' rollers, artists, musicians, writers, filmmakers, photographers, whiskey drinkers, drug takers, time wasters... and to the ones who know no difference we are the hipsters... New Yorkers finding their tribes per square foot of its streets. It was on this side of the river, across from the Lower East Side with all its myth and history, that I found a home when I first moved to New York. It was here, when I left with my boyfriend (who later became my husband), that I wanted to come back to, and did. I was here through all its changes, and all my changes. I was here when I was homeless and I was here even when I tried not to be. Maybe from the outside we are one and all the same, but on that afternoon, this felt like a plus. Being here made me feel like I belonged to something bigger than myself and I was not alone anymore. The river honored it's ocean, the waves high and the tide coming up. The wind rushing through made me unstable and from where we stood (I and all the other versions of me), the sky felt as heavy as a Kurt Cobain performance on his last days. When the set was ready to start, as stated by all the news channels in the world, I locked my door. Inside I had my perishables, I was surrounded by my shit and given the fact that I was only a half block from an evacuation zone, I was ready to go down, bough and all. That night is a blur of bad television news, Boardwalk Empire, falling scaffoldings from the construction in my gentrifying neighborhood, and the beautiful sight of explosions in the sky. As I faded in and out of sleep, I could feel the spirits of destruction dancing in the room. It was upon me, it was upon I, it was upon my ex, the wanderers of the neighborhood and the ones across the river; it was upon us.

As the morning approached, I got up restless. I needed out of my world and into the world and before I could turn on the news, I was sitting in a coffee shop with a friend, having coffee not made by me. Later as he moved me on the back of his bicycle around the neighborhood, an image kept coming at me, that of a photograph my parents took as they were standing in the doorway of our house with the black film camera that was later stolen from my mother's purse as she was riding the bus to work. This, my only memory of them together. The photo; me at age four, playing in the rain, my eyes closed, my head tilted up, and my tongue sticking out as I am swallowing raindrops.

That afternoon, sitting on my porch smoking cigarettes, I saw the noise of the now silent subway be taken by the rolling suitcases and idle conversations of the ones crossing the bridge towards me, hundreds of them, walking together, alone in their stories. And as the sun set and the moon lit the silhouette of the dark buildings across from me, I couldn't help but think how appropriate that sight was. New York feels like that sometimes, New York feels like that a lot of times; a beautiful dark place, and us in it, finding togetherness in the most unlikely ways, as we cross rivers.

In the days after, I wish I could say I ran like a headless chicken trying to find chicken for the ones in need, as so many of the ones I crossed paths with were. To be a hero of some sort, like the image of Sean Penn on boat in Katrina. It's that fantasy we have of ourselves when we watch a tragedy or poverty stricken country on a television set. A magical idea, a purpose, a voice inside of us screaming, "I wanna do that!" But instead my then floors and couches were quietly occupied by the ones that were still in the dark, and outside on the streets on both sides of the river and beyond, everything was a whisper. Every unavoidable eye contact, act of kindness, and darkness that cracked relationships open, in every laugh, tear, grief, dance and whiskey shared till down.

Storms make us dance to their own music and there is no changing tunes until they are gone. They take us high, make us heavy and drop us low. They leave us naked and raw, our hearts wildly moving through them; "I am alive... I am alive... I am alive..." Until we reach a bough. When such moment comes, before we trace back the thread, before we cry our losses, before we freeze with fear, build a tree house and forget we have wings. Before we crave wilderness, before we wish for company, before we start to believe we are what we have, let us sit with necessity of our emptiness as we breathe calmly, and if a whisper shall arise, it will be... "I am here right now."