Appeared originally in Angels on Earth.

The day of the Newtown shootings began like any other. I was out the door by 6:45 a.m., before my manufacturing firm three miles away.

"I got an automated call from the school," said Julie. "There's been a shooting at Sandy Hook."

Our children, Katie, a fourth grader, and Eli, in second, attended a different Newtown school. They were safe, as far as I knew. But we had friends with children at Sandy Hook.

I turned to my computer, flipping through news sites like they were playing cards. The local paper, The New York Times, CNN, I don't know how many others. An early report said one person had been wounded. Minutes later, another claimed that several had died.

I tried to get my head around it. This was our home. Julie and I had lived here 15 years. A school shooting? In Newtown? I thought. That's not us. That's not who we are. That can't happen here.

Finally definitive word came in. Twenty first graders shot and killed, along with six staff members. I felt like I'd been punched in the stomach. I need to be home with my wife and kids, I thought. I just picked up and left. I have no memory of driving home.

Pull yourself together, I thought, sitting behind the wheel in my driveway. You can't let the kids see you like this. It'll scare them. Then I started crying. I couldn't stop.

It was five minutes before I trusted myself to go inside. The first thing I did when I opened the front door was grab both kids and hug them. "Can we go and play with the Wii?" Katie asked.

"Sure, go ahead," I said. They tromped off to the playroom. Then I grabbed Julie and held her for dear life. "What are we going to tell the kids?" I asked when we finally separated.

That night, after dinner, we told them the basics.

"A man with a gun came into Sandy Hook school and shot some kids," I said.

"What if the man comes to our school?" she asked.

Katie nodded. Then she and Eli went downstairs to the playroom. Katie didn't say another word about the shootings till we knelt at her bedside for her good-night prayers. "We're going to pray tonight for the kids who died," I said, and bent my head.

"Dad," Katie said, "we should pray for their mommies and daddies too."

By the time the kids were asleep I was emotionally exhausted. I needed some private time. "I'm going to the grocery to pick up some milk and cereal for tomorrow," I said.

The grocery store was five minutes away. I didn't turn on the radio. I couldn't bear to listen to any more news. Instead, I thought of what Katie had said. About the moms and dads, and how we had to pray that somehow they'd get through this.

At the grocery, I grabbed a cart and headed up the cereal aisle. A woman rolled her cart toward me. For the briefest moment we caught each other's eye. We nodded, offered each other a thin smile. And then we each continued in opposite directions down the aisle.

I thought, She's thinking the same thing I am. On this awful day, we each need the comfort of another's warmth.

I reached for a box of Rice Krispies and headed to the soup aisle. I passed an older man and we shared the same nod and smile. Before reaching the checkout line, it happened twice more.

Driving home, I couldn't stop thinking about those nods and smiles. Back home I Googled the words of something Dr. Martin Luther King, Jr., had said.

I opened a blank Word document on my computer, not really having a plan but somehow feeling that I was being guided. Choosing love. I started playing with the line.

Green and white are Sandy Hook Elementary School's colors. I wrote, We are Sandy Hook in white, on a green background. It looked like writing on a chalkboard. And beneath that, We choose love.

Monday afternoon, without telling Julie what I was doing, I phoned a local printer. "How long would it take to run off two hundred flyers?"

Half an hour later I had a box of 200. Tuesday morning I skipped an office Christmas party and instead drove to downtown Sandy Hook, the first time I'd been there since the shootings. I went into the Sandy Hook Diner. "I was wondering if you'd like to hang one of these in your window," I asked a waitress.

She reached for it. "Absolutely," she said, and grabbed some tape.

I walked out thinking, That felt really good.

I entered another shop. And then another. Every shopkeeper took a flyer and posted it in the window. I walked all through downtown, handing out flyers at every shop.

"Who are you with?" asked one customer, taking a flyer.

"Just a guy who lives here," I said. I went from Sandy Hook to Newtown's Edmond Town Hall, handing out flyers everywhere: to a dentist's office, a Starbucks, an antiques store....

"We have to keep doing this," Julie said when I told her what I'd done. We ordered a second printing, and set up a Facebook page: We Are Sandy Hook--We Choose Love.

The message caught on. Two friends called to say they'd seen the words on different highway billboards. It looked like some angels had picked up the message and were spreading it further than just Julie or I could.

I see the impact of the message on the people around me, the people of Newtown. We are now a community of random acts of kindness. They say being loved gives you strength and loving another gives you courage. Turns out there are a lot of courageous people in Newtown, because we chose love.

PHOTO GALLERY
We Choose Love
Download
Calling all HuffPost superfans!
Sign up for membership to become a founding member and help shape HuffPost's next chapter
Join HuffPost
Voting Made Easy
Register to vote and apply for an absentee ballot today
Register now

After Sandy Hook Tragedy, They Chose Love
We Choose Love 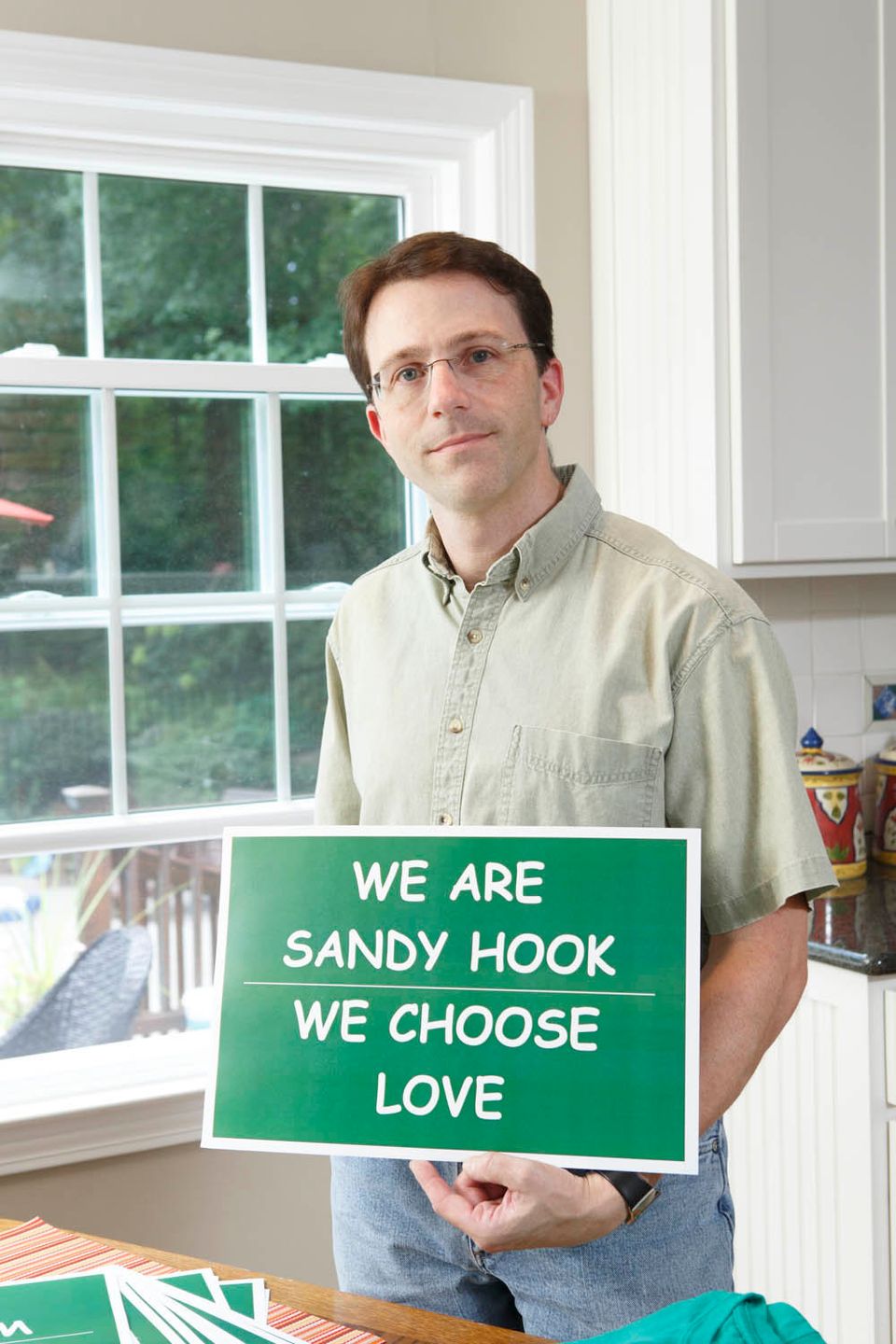