WASHINGTON -- In October 2012, Superstorm Sandy wreaked major havoc on the United States, causing 117 deaths and leaving $62 billion worth of damage in its wake when it passed through New York and New Jersey. But Sandy wasn't the strongest storm ever to hit that region, and there is the potential for other, much bigger storms to strike, a new report warns.

Sandy was considered a Category 3 storm in its early stages, but by the time it hit New Jersey, it had been downgraded to a post-tropical cyclone. Sandy was unusual in its very large storm surge and wide berth. But the report, released Thursday by the reinsurance company Swiss Re, digs back into the historical record to look at another storm -- an 1821 hurricane that struck the Mid-Atlantic states and moved north -- that would do a lot more damage than Sandy if it were to strike today.

"Hurricane Sandy was obviously a terrible event for the Northeast United States, but it really was not the worst-case scenario," said Dr. Megan Linkin, a natural hazards expert for Swiss Re and the author of the report. "The East Coast is not immune to a hurricane that brings a Sandy-like surge and extreme winds over a large area."

When the Norfolk Long Island Hurricane struck in early September 1821, it devastated the coastline from North Carolina to New York, bringing winds of up to 156 miles per hour. Here are the wind gusts that the hurricane created, shown by county: 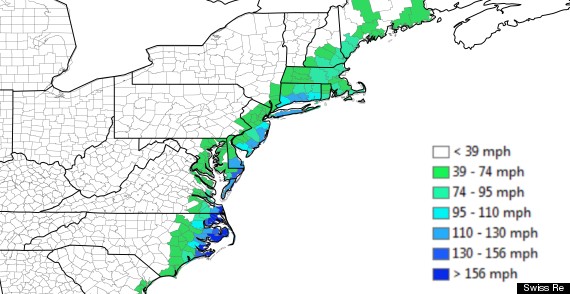 Our weather forecasts are much more sophisticated today, of course, meaning another storm of this magnitude wouldn't catch people off guard. But there would be a much greater risk to population and infrastructure if such a storm were to occur now, said Linkin. When the 1821 storm passed through hubs like Washington, D.C. and New York City, those cities had much smaller populations -- only 136,000 people combined. Today, Washington alone has more than four times as many residents, and New York is home to more than 8 million people.

Using meteorological models, geographic and infrastructure data and Swiss Re's underwriting tools, the report considers the impact an analogous storm would have today. It predicts a storm surge of up to 12 feet at the southern tip of Manhattan, and a surge of up to 25 feet in Atlantic City, New Jersey -- in part because the water is about a foot and a half higher now than it was in 1821, due to sea level rise.

Swiss Re produced this visualization of the potential flooding in Manhattan, were a storm similar to the Norfolk Long Island Hurricane to happen today: 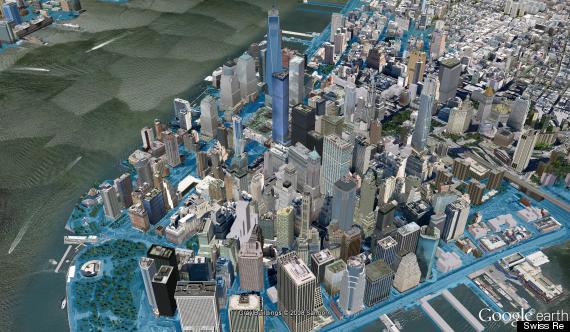 All told, the report says, a storm like the one in 1821 would today do 50 percent more economic damage than Sandy, causing losses of up to $107 billion. Such a storm would also do more damage than Hurricanes Katrina, Rita or Andrew.

"The economic impact from an event like this would be magnitudes larger than anything we've seen before," said Alex Kaplan, vice president of Swiss Re Global Partnerships, in an interview with The Huffington Post.

For Swiss Re -- part of the reinsurance industry, which means it provides insurance for the companies that provide insurance for everyone else -- the point of revisiting this historical storm is to illustrate that while Sandy was bad, the potential exists for much worse. And, they say, individuals as well as local and state governments should be planning accordingly, whether by insuring assets or finding ways to improve crisis response plans and guarantee resilience of infrastructure.

"We can't stop an event from happening. Mother Nature is going to do whatever she wants to do," said Linkin. "We need to make sure we're prepared."