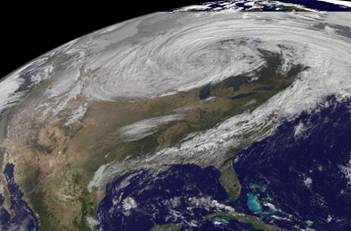 Were you impacted by "Nor'easter-cane" Sandy?" Statisticians will debate whether it was a 1 in 100 year storm -- or something worse. Insurance companies will calculate how many tens or hundreds of billions of dollars were lost. It will be a big number, probably the most expensive storm clean-up and recovery in American history. It's "media hype" until it injures your loved ones, cuts the power, floods your home, or shuts down your small business.

Sandy was a rare, hybrid storm -- an odd meteorological mutation, a little understood mash-up of hurricane and Nor'easter vaguely similar to 1991's "Perfect Storm." It was unlike anything I've ever witnessed in my 40 year meteorological career: the size of the storm, its speed, the transition from hurricane to explosive Nor'easter, the miles of coastline experiencing a devastating storm surge, the sheer number of Americans impacted? Unprecedented.

A warmer atmosphere is flavoring all weather now, so it's increasingly nonsensical to say "you can't prove climate change made Sandy worse!" And you can't prove it didn't. We're rolling dice, and as water levels rise, warm and expand we can expect Sandy-like storms to strike with greater frequency and ferocity. A one foot rise in sea level has left New Yorkers even more vulnerable to the ravages of storm surge. Scientists predict even more in the years ahead, and America's most populace city is especially vulnerable. Here's an excerpt from a Nature article abstract:

"...Struck by many intense hurricanes in recorded history and prehistory, NYC is highly vulnerable to storm surges. We show that the change of storm climatology will probably increase the surge risk for NYC; results based on two GCMs (General Circulation Models) show the distribution of surge levels shifting to higher values by a magnitude comparable to the projected sea-level rise (SLR). The combined effects of storm climatology change and a 1 meter sea-level rise may cause the present NYC 100-year surge flooding to occur every 3-20 years and the present 500-yr flooding to occur every 25-240 years by the end of the century...." According to scienceblogs.com "...Storms that used to occur every 100 years can be expected between 5 and 33 times as often." 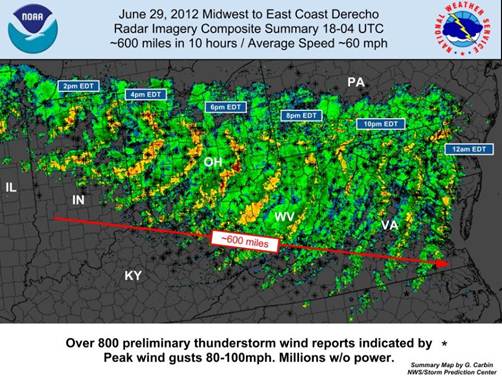 It's been two years of unprecedented weather disasters. An historic summer derecho, the most severe on record, swept from Indiana to Washington D.C. on June 29. My relatives in Bethesda & Potomac are still traumatized by the boomerang-shaped swirl of hurricane-force winds that swept in with little warning, plunging a huge swath of the Mid-Atlantic back to the 18 century in the blink of an eye.

Maybe it was the stultifying summer heat wave and drought that rivaled the Dust Bowl, symptoms of the warmest year on record for the USA? 1-in-500 year floods in Nashville and Duluth since early 2010; record rains lashing Vermont in the wake of Hurricane Irene last year; wildfires in Colorado Springs; record swarms of killer tornadoes sweeping across Dixie Alley in the spring of 2011? Pick your poison.

Mother Nature is on a tear.

It's all part of a pattern, a discernible trend. According to a Yale University study, 4 out of 5 Americans was personally impacted by extreme weather or natural disasters in 2011; 1 in 3 was injured by severe weather last year. An October report from reinsurance giant Munich Re shows over a trillion dollars in damage from 1980 to 2011, a five-fold increase in disasters over 3 decades, with North America Ground Zero for weather extremes.

Turn on the TV or pick up a newspaper. Wall Street was just shut down for the first time since 1888. Submerged subways in Lower Manhattan. The Navy has come to New Jersey's rescue. Damage may top the previous record, Katrina's $146 billion in 2005. How much more evidence do we need? 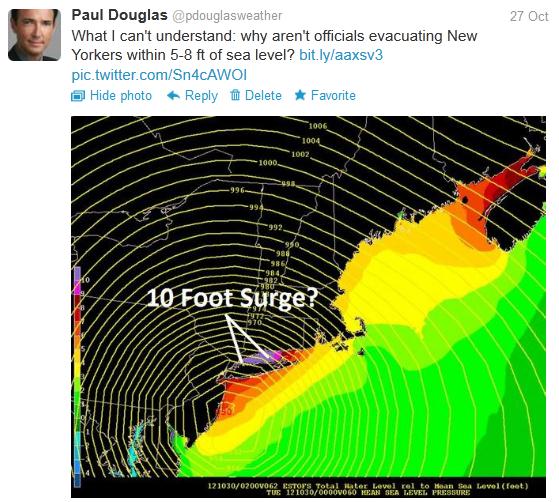 Climate change is real, as I've tried to describe in previous posts here, here and here. Last Monday I warned our Alerts Broadcaster corporate clients of an historic storm brewing for the Northeast. By Wednesday, October 24, five days before landfall, I started sharing our increasingly dire forecasts with Huffington Post readers. We called for a record hybrid storm unlike anything the Northeast had ever witnessed. If anything, Sandy was more extreme than even my worst-case scenario.

I don't like making these calls. It drives me crazy to see the effects of climate change going on all around us, to see the devastation, and all I can do is react -- warning people to get out of harm's way. It's time we do more as a nation than react, late, and after the fact. It's time we wake up and act.

Fact: we already have the technology and the entrepreneurs to slowly transition beyond coal, natural gas and oil. What's lacking? Vision. And the political courage to do the right thing. Not just for today's press release, next month's unemployment numbers or the next quarterly shareholder report, but for the Americans who come next; those stuck with cleaning up our dirty little fossil fuel hangover.

The power may still be off where you live, but the one gift, the most precious power we all possess, is the ability to make our voices heard. On November 6 consider voting for local, state and national candidates who acknowledge a role for sound science, leaders who aren't afraid to face climate facts. Don't know where your state representatives stand on climate science? Here's a good place to start. 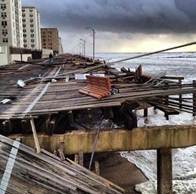 Dr. Ben Santer is one of the world's leading climate scientists, doing research at California's Lawrence Livermore Labs. He travels extensively, sounding the alarm, educating everyone he can about what is happening, and what is coming. At a recent climate seminar in St. Paul he said:

"We hear so much about budget deficits and the national debt, both very real concerns. But what of the environmental debt we're leaving our children, and their children? There is something fundamentally wrong and profoundly immoral about what we are passing on to future generations."

Future generations will hold us accountable.