Hurricane Sandy has been widely treated as a wake-up call, even nudging New York Mayor Michael Bloomberg to jump down from his presidential fence to endorse President Obama because of the need for action on climate change.

But it should be a particular kind of wake-up call for small government conservatives who, along with fossil fuel interests, remain the biggest barrier to an effective U.S. response to the climate threat. Sandy is unlike to change their view of the reality of climate change -- serious conservative leaders already accept that the world is warming, that at least part of the warming is caused by human activity, and that continuing to alter the chemistry of the atmosphere by, say, doubling carbon dioxide concentrations, will further destabilize the climate.

And conservatives are probably the least likely to decide that the $50 billion price tag for Sandy is a good reason to change their longstanding resistance to climate stabilization investments. They are much less risk averse than the rest of us, and attach a much higher value to the ability of businesses to operate without worrying about constraints on how their activities impact common resources -- like the atmosphere.

But the core of conservative resistance to climate action is their belief that trying to prevent or minimize climate change will "feed Leviathan", and require bigger and more intrusive government, because combustion, burning carbon, is such a widespread core human economic activity. Regulating it thus evokes for conservatives the specter of a massive growth in state power.

But the aftermath of Sandy -- not its damages, but society's response to those damages -- strongly suggests that it is the failure to stabilize the climate that creates the greater risk of an enormous growth in governmental power. Conservatism has obsessed with the wrong threat.

The New York Times captured the dominant meme in its first post-Sandy editorial : "A Big Storm Requires Big Government": "Disaster coordination is one of the most vital functions of "big government..."

There has been a series of extreme weather incidents. That is not a political statement, that is a factual statement ... Anyone who says there's not a dramatic change in weather patterns, I think is denying reality.... We have a new reality when it comes to these weather patterns. We have an old infrastructure and we have old systems, and that is not a good combination.

The iconic political image of Sandy's impact was New Jersey Governor Chris Christie and President Obama in Atlantic City, sharing the burden of coping with the disaster. Christie's embrace of the President, and rebuff of Governor Romney, made the point eloquently; when disaster strikes, even small government advocates want big government support. 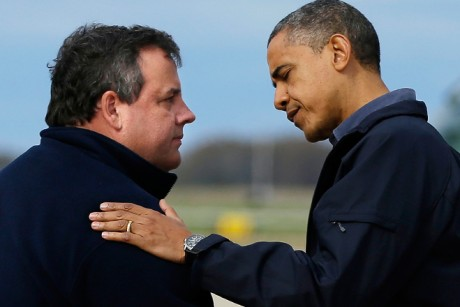 But neither Obama nor Christie was the dominant figure in the response; the hour belonged to the man whom libertarians should fear above all -- New York Mayor Michael Bloomberg. The fact that only three days after the ocean poured into New York's subway system many of the trains were back and running, and Wall Street was up and functioning, is above all a tribute to the capacity and effectiveness of City Government in New York, honed by two and a half terms of Bloomberg cross-training, building on a base erected by Rudy Giuliani. Bond traders, in a crunch, turned out to need transit workers. Smaller towns in New Jersey -- rich and poor -- are getting back on their feet much more slowly, even when they were not as badly hit as Atlantic City or the Big Apple -- they simply don't have the muscle, the organization, the discipline to put things back where they were after a storm in a matter of hours.

Why do I say that small government conservatives should fear Bloomberg? President Obama represents a cosmopolitan, increasingly diverse and tolerant America, a new reality which profoundly disturbs traditional, small town Tea Party voters. But Obama doesn't really perturb the folks at the Cato Institute -- he represents traditional Democratic liberal politics, and they know how to live with, and respond to that.

Bloomberg on the other hand, represents the return of the politics of Teddy Roosevelt -- strong government as a protector and bulwark. TR is the political figure that gives libertarians nightmares. (Glenn Beck called TR's philosophy, "big government, it's a socialist utopia and we need to address it as if it is a cancer.")

But what causes the public to turn to big government -- is it the desire to dodge future threats, or the reaction to threats which we didn't avoid? Small government advocates don't seem to have asked that question very often or very deeply.

The kinds of self-governing, bottom-up commonwealths that libertarians like to evoke exist in the presence of, indeed require, a certain framework of stability. Village republics have not thrived where they were exposed to the movement of large imperial armies -- think of the plains of central Europe -- they need the shelter provided by mountains, as in Switzerland. Nor does small government flourish in the face of extreme environmental instability. Karl Wittvogel pointed out in 1957 a strong correlation between societies faced with the need to curb raging rivers for irrigation purposes and centralized, bureaucratic despotism's.

When the PBS NewsHour looked at Sandy's lessons, American Enterprise Institute fellow Kenneth Green made the best case he could for how cities could respond to changing climate without a major push to curb greenhouse gasses. But his best case required a call for highly intrusive "imitation of a functioning insurance market that prices risk appropriately" whose function would be to drastically reduce the number of people -- and the amount of infrastructure -- in places with increasing climate risk.

It's a good idea -- but if conservatives think carefully, a government which needs to erect "imitation" insurance markets to keep its citizens from living in the vast swathes of a nation which have been put at climate risk is hardly their preferred tiny, watchman state. It seems easier to figure out market-like mechanisms to discourage the wasteful consumption of fossil fuel and the development of climate friendly substitutes than to figure out how markets will take care of the problems caused by massive droughts, forest fires, floods or hurricanes.

The Dutch are a good example. Their entire nation is -- and always has been -- at severe risk from the sea. They have built fabulously good engineering structures to protect themselves. But while Holland is a highly tolerant, and socially libertarian society, it is hardly a small government one. Collective defense against the sea has not produced a politics of rugged individualism. Do carbon taxes, wind turbines and electric cars, even with a bit of government support, really feed Leviathan the way flood/fire/ and drought-proofing America would?

Conservatives, of course, will protest that their approach to coping with a destabilized climate in a warmer planet is not to erect huge sea walls even where they are needed. Green made that clear on the NewsHour. "Oh, that's right. We will never have a risk-free world. And, in fact, you wouldn't want one, because with risk comes learning."

But the right also knows that this part of the Conservative Project -- persuading ordinary citizens to embrace physical and financial risk as the tonic that keeps the blood flowing -- has always failed. People just aren't designed that way. When volatility and instability threaten security, the human response is to seek protection from stronger sea walls, stronger armies, or stronger government regulations. Just look at the results of the Great Recession.

David Brooks commented on this recently, saying that "life is best organized as a series of daring ventures from a secure base." Brooks was referring to individuals. But the principal applies to communities as well -- the secure bases that for generations human communities have relied on was climate. New York was not Atlanta -- people could live happily and freely in either, because their way of erecting a society was exquisitely fitted to the predictable climate they found themselves in. But load the climate dice, scramble expectations badly enough, and more and more often extreme weather, like one of the armies that periodically swept through Germany, destroys so much of what a community has relied on that, like Holland, the reality that "we are all in it together" when it comes to climate will trump conservatism's preference for self-governance and small government.