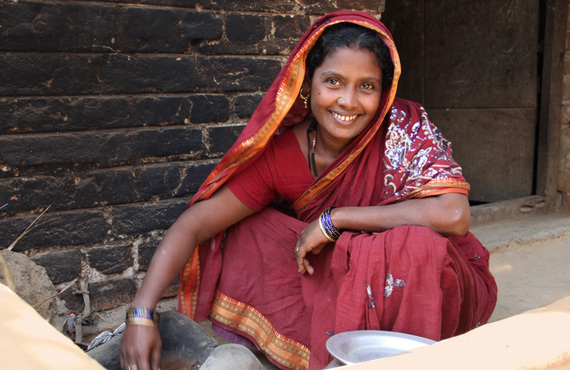 "Why do we have toilets at school but not at home?" This question by one of her children prompted Nusrat, a wife and mother of six living in India, to apply for a sanitation loan. Within two weeks of receiving the loan, Nusrat was able to purchase a toilet. Now, one year later, the monthly installments on Nusrat's loan have all been repaid and her family is happier, healthier and safer.

In India today, more than half of households lack access to improved sanitation. In rural areas, this proportion rises to over 70% percent, or about 620 million people. In fact, India accounts for 60 percent of open defecation globally.

Poor sanitation contributes to diarrheal disease, which in turn results in premature mortality, childhood malnutrition and stunting, high healthcare costs, and massive productivity losses. Emerging research is showing that childhood stunting has lifelong effects on both health and cognitive ability.

As the United Nations Member States prepare to adopt a new, universal set of goals, targets and indicators to guide their political policies and agendas over the next 15 years, I am encouraged to see that Sustainable Development Goal #6 is dedicated to ensuring availability and sustainable management of water and sanitation for all. While progress has been made, the current Millennium Development Goal of halving the proportion of the world lacking access to improved sanitation remains unmet.

I believe that financing will be the most critical bottleneck that we will have to overcome if we are to achieve our ambitious goal of universal access to water and sanitation services. While we know that investments in achieving full coverage in a country is one of the most cost effective development interventions a government can make, only a quarter of the world's governments allocate the resources to achieve it. Foreign aid will play a crucial role but it's not a panacea. If we are to truly embrace these ambitions we'll have to think differently about how we finance them. Viewing people in poverty as citizens with rights and resources versus beneficiaries of aid and charity is the first step.

For a family living below the national poverty line, the upfront cost of a toilet can easily equal a household's average monthly income but many people are willing to make the investment if they can spread the cost over time by saving or borrowing. In India alone demand for micro financing sanitation in rural communities is estimated to be upwards of $6 billion. Sanitation financing for the rural poor provides significant social and economic benefits, helps governments and donors stretch their investments further, and allows households to more easily access critical sanitation services.

Through Water.org's WaterCredit program, we have found that microfinance can address demand by offering local microfinance institutions (MFIs) and nonprofits a variety of capacity-building grants and technical assistance to create, pilot and scale sanitation microfinance. These partners have gone on to source funding from banks and local capital markets to disburse loans to people in need.

To date, WaterCredit has provided $12.9 million in smart subsidies to MFI and nonprofit partners, which in turn have disbursed more than $128 million in loans, successfully reaching 2.6 million people throughout ten countries with transformative water and sanitation solutions. Sanitation lending multiplies the impact of a traditional subsidy by leveraging capital from the private sector and social investors for loan capital, recycling capital back into the system and freeing up government and philanthropic funds for most disenfranchised communities in desperate need of direct aid and subsidies. For every $100 we invested in catalyzing sanitation lending, 21 people gained access to improved sanitation.

Based on Water.org partner performance, loans for sanitation products have a remarkable 99 percent repayment rate. They also have strong social impact on borrowers, fulfilling pressing needs for improved health and well-being. The benefits of sanitation lending extend to the MFIs by helping them to attract new and retain existing clients as well as achieve their social missions.

As the world leaders set out to determine how to achieve the new ambitious Sustainable Development Goals, we encourage them to explore ensuring access to affordable capital for sanitation solutions for all. Together, through sanitation financing, and other sustainable approaches, we will end open defecation by 2030, creating a cycle of opportunity from what was once one of poverty.

This story first originally appeared on SkollWorldForum.org as part of a series on sanitation.

To learn more about how you can join Water.org in their efforts to bring improved sanitation to the world visit ToiletDay.org.