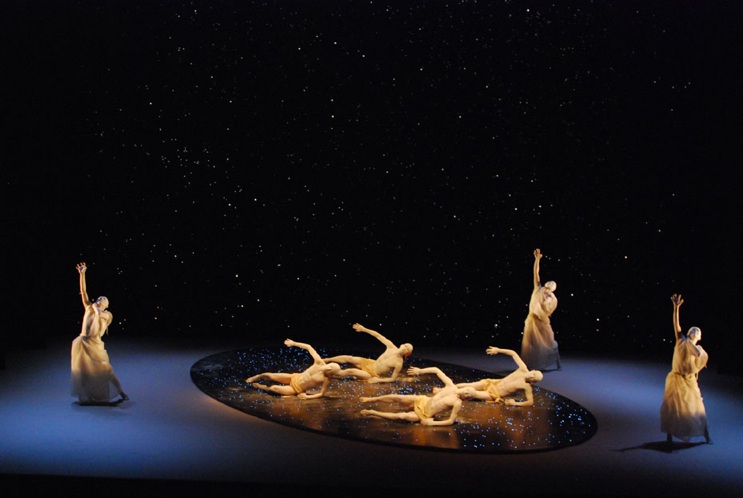 used by permission of Sankai Juku

In 1975 I was sitting in the balcony of the Elgin Theatre one electric Manhattan midnight watching through the haze of an opiate ambiance the film Siddhartha, which is based on a Hermann Hesse novel that inundated my generation with yearning. I blink and 35 years later I am sitting in the middle of a silver half moon Autumn Chelsea night, in the reincarnation of the Elgin, the Joyce Theater, witnessing Sankai Juku reveal our lives. The air is filled with translucent (iridescent) white sand and dust. Our hearts are touched with wonderment. The piece is entitled Tobari - as if in an inexhaustible flux. Ushio Amagatsu founded this Japanese Butoh dance company in 1975 while I traveled with Siddhartha at the Elgin.

Nine years after my Elgin sojourn, I am standing in the balcony of the City Center near Times Square watching what I thought to be a group of aliens emanating from another dimension. Or were they living embryos without need of corporal existence. Sankai Juku. With me must have been half the dance community of New York City standing from beginning to end replete with one communal expression - eyes, mouths wide open. Breathing in the silence.

What was this chubby, Jewish boy from the Bronx doing in such esteem company? A few weeks earlier I had seen a documentary dance video on PBS featuring this incredible company performing in a factory in England. The soundtrack consisted entirely of factory noises. I promised myself to see these otherworldly emanations in person. Since that time I have attended a Sankai Juku performance every time they and I have been in New York. I knew they toured the world and their arrival on this Island came about every two years or so. During their 35 years I have grown old. Mr. Amagatsu and his company have grown brighter.

Mr. Amagatsu has often stated that his company's style is a "dialogue with gravity . . . sympathizing or synchronizing with the gravity." In their search we are allowed to journey within to a singular, elegant chord of a universal soul, which they embody. We are given the privilege to fly unencumbered by gravity. Critics have said that Sankai Juku is "pure metaphor." I say they personify Time.

Butoh is a term shortened from ''ankoko butoh,'' which means ''dance of utter darkness.'' How wonderful. How luminescent. It isn't just how they move, or how they look, it is their totality of existence, focus; they manifest love.

Through these decades I have had a growing awareness that there is a constant soundtrack to all of Sankai Juku's performances. That is the sound of breath. It is the performer's breath. It is our breath. It is infinite. Magical sounds that Mr. Amagatsu and his frequent collaborators, Takashi Kao, YAS-KAZ, Yoichiro Yoshikawa float throughout space wafting alongside the inhalation and exhalation of incandescent lungs of audience members whenever an essential particle arises from the innocence of an image forming slowly or suddenly. This image bubbles into our core from the carefully placed gesture and movement of Sankai Juku.

In Chelsea Manhattan, two weeks before Halloween, white powdered, barefoot Beings in saffron skirts and robes moving on crystal sand escort us to our essence where we are quiet; grace reigns (rains). How sublime that Siddhartha's image was animated in this once decrepit, now elegant theatre. Sankai Juku deepens that voyage.

I have witnessed thousands of people in much larger venues stand at the end of a Sankai Juku performance with tears silently drenching their faces with awe. I have jumped up not caring if I came down at the end of a Sankai Juku dance so I may express how grateful I am to have had the privilege of swimming in their light. Tonight, however, I remember why Butoh dance was created. It was a response to the overwhelming destruction unleashed by atomic weapons over Japan. Start from nothing. Strip all accessories of humanity. Open our eyes so we may see a myriad of luminous laughter, tears, fear and love.

According to Mr. Amagatsu, "tobari is a veil of fabric hung in a space as a partition." Once, while lying on my side on a cot in a small Manhattan studio as a very young man, I saw a vision of a black, lucid curtain dangling in front of me. I was not scared. I wanted to know what was on the other side. I could barely make out form and feeling prowling behind the fabric. When I thought I would die from curiosity, I clearly heard a loving voice tell me, "Wait. One day the curtain will dissipate and you will be on the other side." When Sankai Juku appears, the curtain dissolves. Exhilarating. 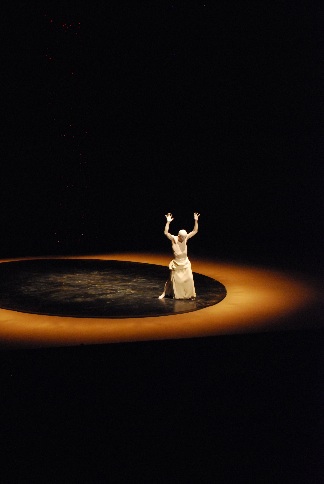 Used by permission of Sankai Juku