Beyond its well-maintained public image, Santa Barbara, California (aka the American Riviera) is a working class town whose local economy includes a large service sector where some 38.0 percent of the population is Latino, according to the 2010 census.

Out of the purview of the steady stream of sightseers drawn by its beautiful beaches, high-end retailers and Christian tourist attractions, a class war has been raging there over a proposed gang injunction championed by Police Chief Cam Sanchez, District Attorney Joyce Dudley and Santa Barbara Mayor Helene Schneider for the past three years. Ultimately, the battle played out in the courts.

But on Tuesday, July 22 the ACLU of Southern California informed the defense team that the fight was over. The American Riviera now officially enjoys a new and very rare distinction; the first successful defense in a gang injunction case -- not only in California, but anywhere in the country. 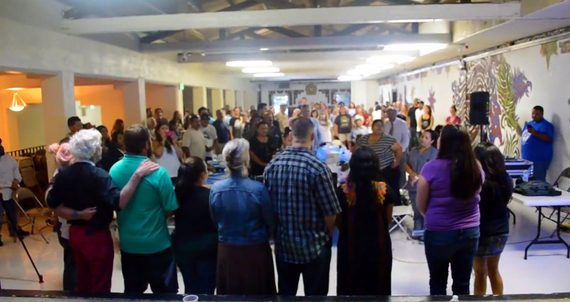 The campaign of resistance that was conceived and spearheaded by a small community organization called PODER (People Organizing for the Defense and Equal Rights of Santa Barbara Youth) along with like-minded community members and 12 pro-bono attorneys officially succeeded when Judge Colleen Sterne struck down the cities proposed injunction after a 15-day trial that started on May 5, 2014 labeling it "flawed, unreliable, and incomplete," noting that gang crime comprised a very small percentage of Santa Barbara's total criminal activity and is much lower than in comparable cities.

Tuesday evening last week there was a party at Casa De La Raza at 601 E. Montecito Street in Santa Barbara to celebrate the victory, but the party's not over; the collateral damage from the failed gang injunction includes a defamation lawsuit brought by civil rights attorney Jaime Gutierrez who is representing some of the 68 people whose names and photographs were displayed at a news conference held by the SBPD aimed at bolstering their campaign to impose the gang injunction.

I still remember three years ago, when I received the news of the proposed gang injunction and the negative consequences injunctions create and I was afraid that I have been targeted as well. As I read the names of the individuals, I noticed that most of them were people I grew with.
I've never been an organizer nor I am one. I am an artist and a filmmaker but there was a responsibility for me to do something about this issue, it was time to give back to my community because my community has helped me when I was lost.
Few people wanted to take this responsibility to fight the gang injunction, I still remember no non-profit wanted to help us because we weren't raising funds, we were raising awareness. We were just a small group of students and community members.
I still remember the first meeting at SBCC West Campus, only five of us. [someone said] "You know we are going against a monster, and many people are going to hate us."

Santa Barbara has set the bar, but the struggle continues in Santa Ana, California where last week an Orange County judge approved a preliminary gang injunction, then issued a stay barring enforcement against the alleged gang members named in the case. Chicanos Unidos of Orange County and others are bringing the resistance to Santa Ana, however it is anything but certain that a permanent injunction will not be issued.