Once upon a time, a jolly old man named St. Nick, or Santa Claus, lived at the North Pole. Every year, at Christmas, he bundled up toys made by his magic elves and flew around the world in a sleigh pulled by flying reindeer, including his most famous one, Rudolph. Santa brought these presents to all the good little boys and girls in return for nothing more than cookies, milk, and unquestioned love. But he also kept a list of bad little boys and girls, who got a lump of coal in their stockings as a reminder to be better next year.

I'm sorry to have to tell you there will be no presents from Santa this year.

It's not that you've been bad. Rather the world's governments (sometimes run by bad boys and girls now grown up) have failed to address the long-worsening problem of climate change. Santa is the latest climate victim. As the last of the summer ice at the North Pole finally disappeared, Santa's workshop sank to the bottom of the Arctic Ocean. When the insurance companies cancelled most flood insurance policies, and Canada claimed the North Pole, Santa lost everything and became the latest climate refugee.

This disaster has long been coming. Back in the early 2000s, Arctic sea ice extent and volume started to drop rapidly -- even more rapidly than scientists anticipated -- due to the rapid warming of the planet caused by the burning of fossil fuels, especially coal. The ice started thinning, breaking up, and disappearing. While some tried to call attention to this as a planetary emergency, others denied it was happening or turned a blind eye. Some even tried to benefit from the lack of ice in the Arctic to find even more dirty fossil fuels to burn. 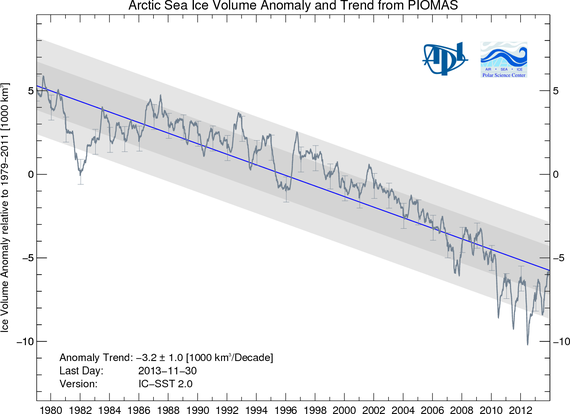 [Figure 1. Arctic ice volume through 2013 from the Polar Science Center

Others have tried to blame the victims for their lifestyle and energy use. Maybe Santa shouldn't have handed out all that extra coal. Maybe methane emissions from the reindeer played a role. Maybe the wasteful consumption that accompanied the commercialization of Christmas was a factor. Maybe Santa himself should have said something -- perhaps we'd have listened to him rather than the naysayers.

But be of good cheer. There are rumors that Santa and Mrs. Claus are trying to relocate to Antarctica with the surviving elves, for as long as the ice there persists. There are no reindeer in Antarctica, but if Santa could make reindeer fly, perhaps he can do something similar with penguins. Some say Santa's list of bad boys and girls has gotten longer and so his job will be easier. There is also a rumor that Santa and Superman (who also recently had to relocate to Antarctica), will share space until Santa and Mrs. Claus can find a new workshop.

In the meantime, come on over to the house on Christmas anyway. We'll crank up the air conditioner and celebrate with family. And there will plenty of extra milk and cookies.

P.S. Oh, also, I'm sorry to say that the fireworks have been cancelled for the 4th of July because of the high fire danger.

[Dr. Peter Gleick is President of the Pacific Institute, Oakland, California, a member of the U.S. National Academy of Sciences, and a hydroclimatologist.]