What do Santa Claus, unicorns and "humane meat" have in common? They're all lovely, feel-good ideas--and they're all fantasies.

Over the summer, a PETA eyewitness worked at Sweet Stem Farm, a Pennsylvania pig farm that supplies Whole Foods with "humanely raised pork." The pigs there were crammed into crowded sheds with concrete floors. Through the wire, they could see and smell fresh grass, the kind in the video about the farm featured on the Whole Foods website. But the only time they were ever outside was when they were being trucked from one shed to another, put on a scale to be weighed or shipped to slaughter.

Sick and injured pigs were left for days or even weeks without adequate care. If a veterinarian ever did treat them, our eyewitness never saw hide nor hair of him during more than two months of full-time employment. A pig whose apparent neurological ailments caused her to go lame languished for eight days until she was finally shot and killed. At least seven other pigs had grotesque rectal prolapses as big as an orange and dripping with blood--and were allowed to suffer from this condition for up to 24 days. 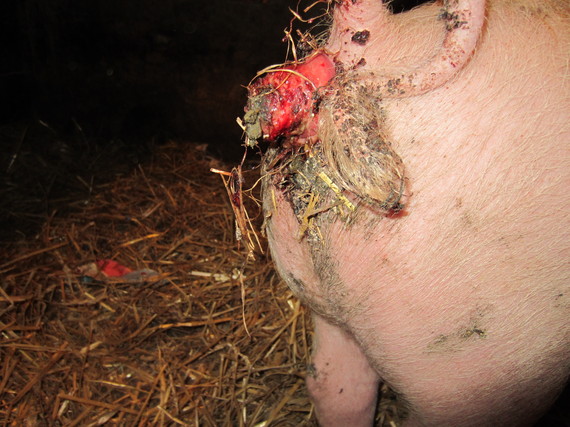 A manager lifted up screaming 70-pound pigs by the ears, as well as hitting them with a hard plastic board while loading them for slaughter. On one day when the heat index exceeded 90°F, more than 20 pigs were tightly packed into a metal trailer more than 24 hours before they were hauled to slaughter--just because the manager didn't want to wait another day to pull straw out of a pen. They had no choice but to stand or sit on top of each other for much of that time.

As disturbing as this is, it's not a surprise to those of us who have to sit through sickening videos and then listen to the profiteers defend the practices, cover them up and kill the messenger along with the pigs, chickens, turkeys, rabbits and others.

Butterball turkeys bear an "American Humane Certified" label. PETA filed a Federal Trade Commission complaint after we found out that the American Humane Certified program standards allow farms to cut off turkeys' beaks and toes, deprive them of any natural light or access to the outdoors, shackle them upside-down and dunk them into electric water baths, where they are likely to experience painful shocks. And acts of deliberate, intentional abuse of turkeys, such as kicking and throwing them, do not result in automatic disqualification from the certification process.

Reporting on Perdue's recent acquisition of one of the darlings of the "humane meat" storyteller crowd, Niman Ranch, journalists have been applying some of the meat industry's favorite buzzwords, such as "sustainable" and "humane." Niman is far from either.

As Hope Bohanec reported in her exposé of "humane meat," The Ultimate Betrayal: Is There Happy Meat?, even Niman Ranch's former owner and namesake, Bill Niman, stopped eating the company's meat products after shareholders lowered the participating farms' animal-welfare standards. Farms are permitted to shock animals, even "downed" ones--those who can't get up because they are too sick, injured or in pain--with electric prods to try to make them move. Workers are allowed to castrate animals and cut off their tails without providing any pain relief. Hens used for eggs can be forced to undergo painful debeaking. And this is all before they even face slaughter, which takes place at a very young age. Of Niman Ranch, Bohanec says, "[T]here is very little, if any, difference from a standard operation." Yet Niman's logo states, "Raised With Care."

When we look at the actual company practices behind all the feel-good labels, it's hard not to agree with Bohanec's conclusion: "[I]t is impossible to produce meat, dairy, or eggs without inherent cruelty. Reducing and eventually abstaining from the use of animal products is the only truly humane option."

"Humane meat" labels are about as trustworthy as a SeaWorld ad. Shoppers are being snowed, and animals are paying the price.