While tens of thousands of Mexicans have lost their lives in the ongoing drug war, millions more have become devoted to death. Saint Death (Santa Muerte) is a skeletal folk saint whose cult has proliferated on both sides of the border over the past decade. The Grim Reapress (she's a female figure) has rapidly become one of the most popular and powerful saints on both the Mexican and American religious landscapes. Although condemned as satanic by both Catholic and Protestant churches, she appeals to millions of Mexicans and Latin American immigrants in the U.S. on the basis of her reputedly awesome supernatural powers. Devotees believe the Bony Lady (one of her common monikers) to be the fastest and most efficacious miracle worker, and, as such, sales of her statuettes and votive candles now rival those of the Virgin of Guadalupe and Saint Jude, the two giants of Mexican religiosity!

On both sides of the border the mass media have depicted her as the patron saint of drug traffickers. And sure enough, she plays an important role as protectress of peddlers of crystal meth and marijuana. DEA agents and Mexican police often find her altars at the safe houses of narcos. The current administration of Felipe Calderon has even declared her religious enemy number one of the Mexican state. In March 2009, the Mexican Army bulldozed dozens of her roadside shrines in the border cities of Tijuana, Nuevo Laredo and Matamoros. But providing protection to narcos is just one of Saint Death's multiple roles. She is also a supernatural healer, love doctor, money-maker, lawyer and angel of death.

As her name would indicate, Santa Muerte is a Mexican folk saint who personifies death. Whether as a plaster statue, votive candle, gold medallion or prayer card, she is most often depicted as a female Grim Reaper, wielding the same scythe and wearing a shroud similar to her male counterpart. Unlike official saints, who have been canonized by the Catholic Church, folk saints are spirits of the dead considered holy for their miracle working powers. In Mexico and Latin America in general, such folk saints as Niño Fidencio, Jesus Malverde, Maximon and San La Muerte (the Argentine counterpart of Santa Muerte) command widespread devotion and are often implored more than the official saints. These popular saints are united to their devotees by nationality and often by both locality and social class. A Mexico City street vendor explained the appeal of Santa Muerte to her saying, "She understands us because she is a battleaxe (cabrona) like us." In contrast, Mexicans would never refer to the Virgin of Guadalupe as a cabrona, which is also often used to mean "bitch." Where the Bony Lady differs from other folk saints is that for most devotees she is the personification of death itself and not of a deceased human being.

No introduction to Saint Death would be complete without consideration of one of her most unique characteristics -- her gender identity. While folk saints abound in the Americas, and other supernatural skeletons work miracles in Guatemala and Argentina, Santa Muerte stands alone as the sole female saint of death from Chile to Canada. Her asexual skeletal form contains no hint of femaleness. Rather it is her attire and, to a lesser extent, her hair that define the saint as female. Devotees and manufacturers of mass produced images of the Bony Lady usually dress her as a nun, the Virgin, a bride or queen. Red and black medieval tunics, white bridal gowns and flowing bright colored satin robes normally cover her skeletal body, leaving only her bony hands, feet and face exposed.

Santa Muerte has devoted followers from all walks of life. High school students, middle class housewives, taxi drivers, drug traffickers, politicians, musicians, doctors and lawyers all count among the ranks of the faithful. Rodrigo is a successful 20-something lawyer whom I met at the most famous shrine in Mexico, in the heart of Tepito, the capital city's most notorious barrio. He was there with a white candle in hand to give thanks to the Skinny Girl (another popular nickname) for freeing him from kidnappers. At the same Mexico City shrine was Claudia, a 33-year-old accountant, who became a believer in the saint's miraculous powers on the operating table. Before her operation for a lung infection, her surgeon gave Claudia a statuette of the Bony Lady and suggested that she invoke her healing powers. Like so many others who come to the Tepito shrine, Claudia was there to give thanks to Santa Muerte for having been cured of an illness.

Still, in a country with an average educational level of eighth grade, the great majority of devotees are the taxi drivers, prostitutes, street vendors, housewives and criminals drawn from Mexico's vast population of the urban working class. Typical of most devotees is the godmother of the cult of Saint Death, Enriqueta Romero (affectionately known as Doña Queta). Before her historic act of displaying a life-size statue of the Grim Reapress in front of her Tepito home on All Saints Day, 2001, Doña Queta supplemented the family income by selling quesadillas to neighbors and passersby. Often wearing the blue and white checkered apron that is practically the uniform of working class women in Mexico, Doña Queta has no more than an elementary school education. Her colorful blue-collar Spanish, liberally peppered with vulgarities, reflects the tough barrio, Mexico City's infamous Tepito, where drug gangs, kidnappers, prostitutes and contrabandistas rule the streets. Doña Queta started off her Santa Muerte worship service in August 2009 with a warning to the faithful to return home quickly right after the end of the ritual lest they be accosted by "all the fucking thieves and thugs around." One of her seven sons did time in prison, and Doña Queta attributes his release to the divine intervention of her Bony Lady. Paradoxically, such miracles in the context of so much drug-related murder and mayhem practically guarantee that a growing number of Mexicans and immigrants to this country will become devoted to death.

Santa Muerte: Mexico's Devotion To the Saint of Death (PHOTOS)
Devoted To Death 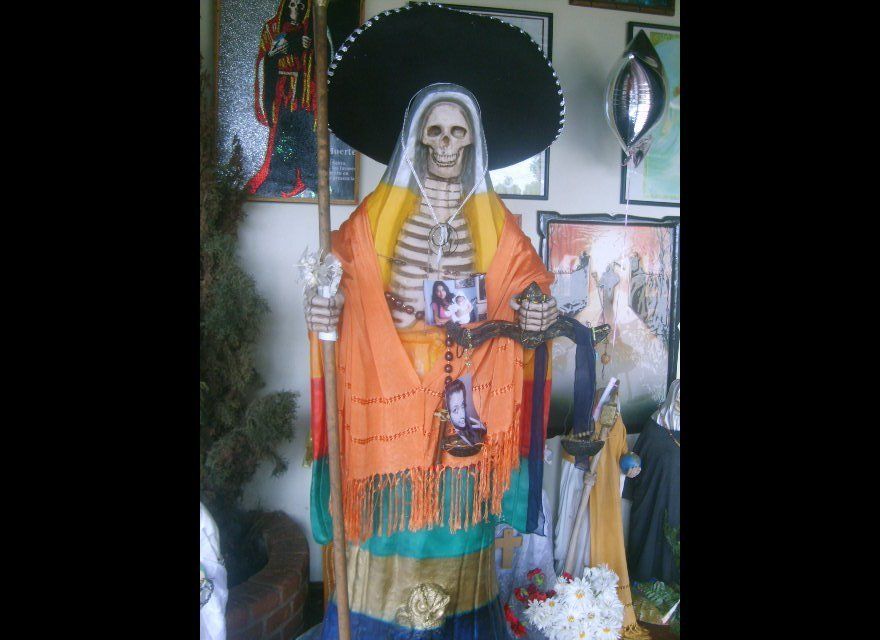