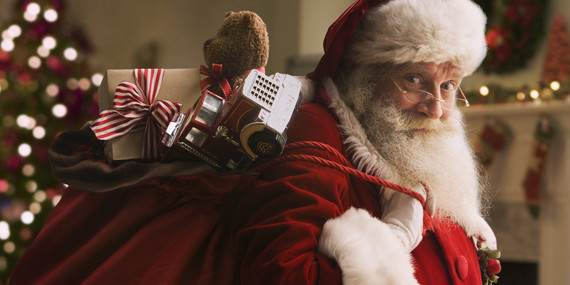 Santa Claus (aka Kris Kringle, Saint Nick & Father Christmas) admits to taking a beating in the polls due to the rise in popularity of Donald Trump, but the internationally renown North Pole toy manufacturer remains confident.

"Trump is doing well with the white, male, Christian, low-brow demographic," said Santa, speaking at an elf convention in Reno, NV, "But that's only a fraction of the electorate. I have the endorsement of every Christian and Jewish child under the age of seven - and their parents - around the world."

"Wait a sec," said This Reporter. "How can you include Jewish children? Christmas is a Christian holiday."

"Maybe in Azerbaijan," said Santa. "Christmas in America isn't Christian. It's a non-sectarian retail holiday. Get real. When's the last time you met someone named Bloomingdale, Neiman or Marcus who wasn't Jewish?"

"So you're not worried that Trump will attempt a hostile takeover?" said This Reporter. "He's been banging the drum loudly over China exports and that's where a lot of toys are made."

"Listen, I've known Little Donnie Trump since he was a pudgy four-year-old who sat on my knee and asked for an erector set," said Santa.

"Yes, but when he opened it, he threw a tantrum in the middle of the lobby of the Plaza Hotel," said Santa.

"Why? He got what he wanted," said This Reporter.

"Actually, he didn't," said Santa. "Little Donnie didn't want a toy. He wanted a real erector set, one big enough to turn the corner of 56th and 8th Avenue into a massive construction site."

"What always happens with spoiled brats. He held his breath until his parents caved in and gave him a prize chunk of Manhattan real estate," said Santa.

"Do you think he'll make a good President?" said This Reporter.

"That all depends," said Santa. "You know, I see Trump when he's sleeping. I know when's awake. I know if he's been bad or good."

"Let's just say Trump has told some whoppers," said Santa. "If he wants my endorsement, he'll have to do better."

"I thought you only controlled distribution of gifts on Christmas Day," said This Reporter. "Are you saying you are involved in the outcome of the primaries?"

"Put yourself in the candidates place," said Santa. "What do you think Trump, Cruz, Clinton and Sanders want for Christmas? A new watch or Iowa?"

"Oh, I see where you're going with this," said This Reporter. "So you didn't see it as competition when the DNC held a debate on the last Saturday before Christmas, the biggest shopping day of the year?"

"Are you kidding?" said Santa, "They were waving the white flag of surrender. Who's going to tune in to see what color pantsuit Hillary was wearing or to hear Sanders yell more about the death of the middle class. And, between you and me, the middle class isn't dying. It's shopping. Just try finding a parking space for a sleigh and eight reindeer at the mall."

"You're saying the DNC threw a blanket over the last debate on purpose?"

"Does a reindeer have a tail?" winked Santa.

"Tell me, Santa, who do you think will make the best president?" said This Reporter.

Santa laid a finger aside his nose.

"Well, I'm in the manufacturing game, so I want a President who is pro-business," said Santa. "I also want my elves to have the best health coverage possible and I'm very concerned about Climate Change. When they talk about the Polar Ice Cap melting, they're talking about my home. Then, of course, there's the gun control issue."

"Where do you stand on that?"

"I'm all for water pistols. They've always been a crowd pleaser," said Santa, "But shooting bullets and killing children? Mrs. Claus and I get sick just thinking about it."

"So you're a Democrat?" asked This Reporter.

Santa helped himself to a glass of milk and a cookie.

"I'm an Independent," said Santa. "I listen to what each candidate has to say and then I consult my Eight Ball."

Stacia Friedman is the founding editor of Daily Lobotomy.