NEW YORK — Santa Claus is coming to town. And he needs a drink.

SantaCon 2012 is hitting the streets of New York on Saturday, Dec. 15, for their annual pub-crawl. The holiday ritual, where thousands of revelers dressed in Santa costumes tour the city’s bars, is “non-denominational, non-commercial, non-political and non-sensical,” organizers say.

A few changes will mark this year’s SantaCon, which kicks off on Saturday at 10 a.m. on Pier 84 on West 44th Street and the Hudson River.

In the past, the SantaCon route was undisclosed, and last year, the Santas caused mayhem in lower Manhattan, where locals accused them of flouting public drinking and urination laws.

This year, organizers have posted a loose route that the city’s Kris Kringles can follow, and Organizers hope the new route will keep the SantaCon revelers from leaving behind traffic, trash, and “traumatized New Yorkers” in their wake.

“Santa” will also send out tweets on @santacon when he plans to move to a different location.

Santas will start drinking in Hell’s Kitchen and Midtown from 11 a.m. to 2 p.m., getting their dose of spiked eggnog at bars like Hudson Terrace at 621 West 46th Street and Beer Authority at 300 West 40th Street.

From 2 p.m. onwards, Santa will take his sleigh through Midtown traffic till 4.30 p.m., stopping at gentlemen’s club, Rick’s Cabaret at 50 West 33rd Street and soaking up the view at 230 5th.

Santa and his red-nosed revelers will take their partying to the East Village from 4.30 p.m., to 7 p.m., stopping at spots like Professor Thom’s at 219 2nd Avenue, all the way to The Village Lantern at 167 Bleeker Street.

Finally, the crawl ends in Williamsburg where Santas can mingle in spots like Berry Park at 4 Berry Street and Spike Hill Music Hall at 186 Bedford Avenue.

But Mr. Claus isn’t heading back to the North Pole just yet. The holiday punch will keep flowing at The Warsaw Santa’s After-Party at 261 Driggs Avenue from 7.30 p.m. onwards.

Santas can also take part in the SantaCon food-drive by bringing at least two non-perishable food items to the day of revelry. For collection points and more information, visit the SantaCon NYC website. 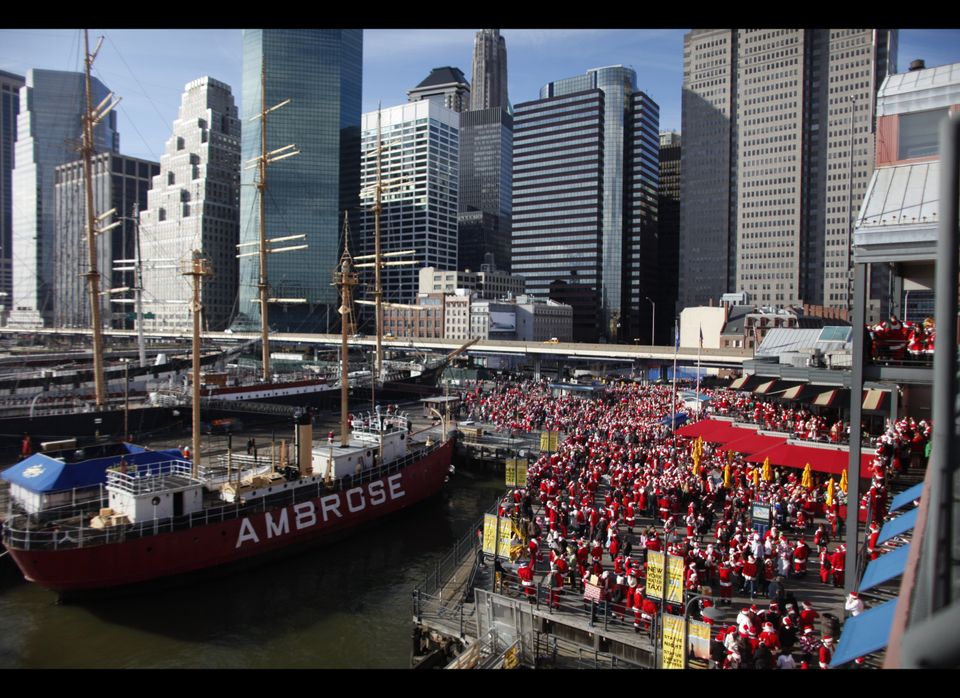 1 / 16
Annual SantaCon Held In New York City
NEW YORK, NY - DECEMBER 10: Revelers dressed as Santa Claus gather at the South Street Seaport during the annual SantaCon event December 10, 2011 in New York City. SantaCon is a mass gathering of revelers dressed as Santa Claus who take to the streets in cities across the country before Christmas. (Photo by Allison Joyce/Getty Images)
Getty