It stands to reason that if Santa were placing his own name on his famous list, he'd have to put it in the "nice" category...which means getting wasted before noon and then aimlessly stumbling around the city of San Francisco for the rest of the afternoon is probably a big no-no.

But, let's say, there's one day a year when hundreds of naughty revelers all decide to dress up like jolly old St. Nick and do that very thing. The man himself could easily blend in with the crowd and no one would notice when he vomited into a trash can after one too many Jager shots. Santa could party all he wanted and no one would question the integrity of his list, let alone demand he check it twice.

Started in 1994 by a San Francisco-based anarchist performance art collective that also served as the inspiration for Chuck Palahniuk's novel Fight Club, Santacon has grown into a worldwide phenomenon where people in cities from Mexico City to Beijing dress up like Santa and rage their faces off.

This year's San Francisco party was no exception. Hundreds, if not thousands, of Santas met in front of City Hall at 1pm on Saturday and then spread throughout the city making merry.

According to SFBay, at least 400 Santas had made their way to Union Square watering hole Lefty O'Doul's by 2pm.

Another group of Santas went for the record of "World's Largest Gathering of Naked Santas." If you're wondering how to identify a Santa when he or she is naked, it's all in the hats.

Check out this slideshow of pics from the last few years of San Francisco Santacon adventures. (WARNING: Some of these shots document the aforementioned "naked Santas" and are graphic.)

Santacon San Francisco: Photos And Videos Of The Naughty And The Nice (GRAPHIC) 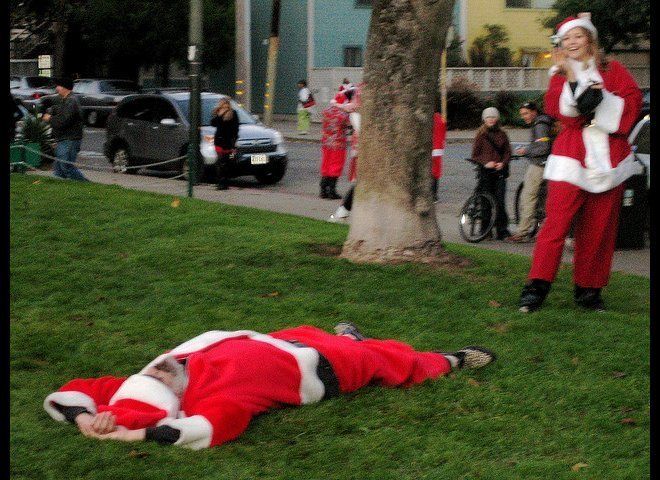