By Helen Murphy and Peter Murphy

BOGOTA, June 15 (Reuters) - Colombian President Juan Manuel Santos won a second term on Sunday with an election victory that allows him to continue peace talks with Marxist guerrillas to end a half-century war.

Santos beat right-wing challenger Oscar Ivan Zuluaga with about 50.9 percent support in a runoff vote after a bitter campaign that forced voters to choose between the incumbent's pursuit of negotiated peace or a likely escalation of combat under his rival.

Zuluaga won 45 percent support and conceded defeat on Sunday evening. (For more on the vote, see )

"These were different elections, what was at play wasn't a candidate's name, it was the direction the nation will take."," Santos said, wearing a trademark pin of a white dove on his lapel as he proclaimed victory surrounded by family.

"If people mobilized for me it's because they know that history has its moments and this is the time for peace, the time to end this long and cruel conflict."

In an old industrial part of the city, close to Bogota's colonial center, some of Zuluaga's deflated backers sobbed as they watched the final numbers roll in.

"The fight continues, tomorrow is another day," Zuluaga said after conceding defeat. "This election reaffirms Colombia as a great Latin American democracy and we are happy to continue defending it."

Santos' re-election comes as a relief to his backers as well as traditional rivals from the left who back the peace talks and feared they could have been jettisoned by Zuluaga in favor of trying to end the long conflict on the battlefield.

Santos, 62, is a center-rightist who hails from one of the country's most influential families.

He opened talks with rebel leaders of the Revolutionary Armed Forces of Colombia (FARC) in late 2012, aiming to end a conflict that has killed over 200,000 people and forced millions more from their homes.

He made hopes of peace his key selling point throughout the campaign.

"I voted for peace, Santos is a decent man who has shown another way of doing politics," said Wilmar Diaz, a 35-year-old public relations executive.

Although they have shown more progress than previous failed efforts, the peace talks in the Cuban capital Havana have been divisive. Zuluaga supporters fear a peace deal could hand FARC leaders political power without punishment for their crimes.

Santos sought to capitalize on support for the negotiations by revealing in the last days of the campaign that preliminary talks had begun with the country's second biggest rebel group, the National Liberation Army (ELN).

A victory for Zuluaga, 55, could have spelled the end of the peace process as he had insisted the FARC put down its weapons before any further talks. Rebel leaders rejected the demand as well as Zuluaga's insistence that they serve prison sentences for crimes committed during the war.

Colombia's financial market were not rattled by the campaign because both candidates are considered business friendly. The economy is one of the fastest growing in Latin America.

Santos' push for peace angered popular former president Alvaro Uribe, who argued for a continuation of the successful U.S.-backed military onslaught that characterized his 2002-2010 rule.

Zuluaga was the candidate of Uribe's party and the former president had such a prominent role in the campaign that some voters spoke of "voting for Uribe".

"I am speechless. I thought Colombia was going to be intelligent, but no, corruption and impunity in Havana won," Gloria Mesa, a 34-year-old systems engineer, said after hearing that Santos won.

After insisting peace can be achieved, Santos will now be under pressure to complete the five-point agenda - already more than half complete - and keep the FARC committed to the process.

Santos won the 2010 election with 69 percent of the vote and his weakened mandate reflects concerns that rebels will be reluctant to disarm or abandon a lucrative illegal drugs trade even if they sign peace.

Congressional elections in March also weakened Santos' majority in the legislature which will be tasked with passing any proposed legal changes under a peace deal. 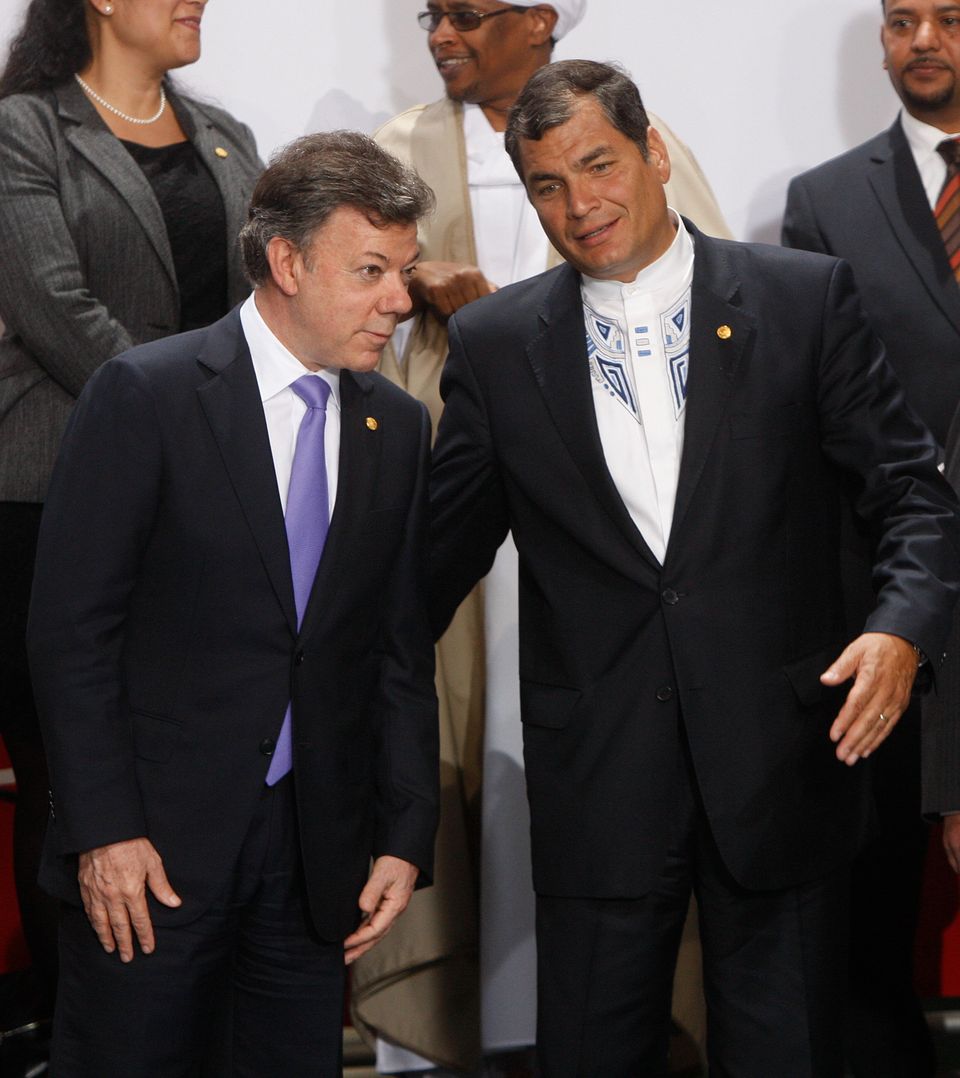 1 / 5
Ecuador's President Rafael Correa, right, speaks to Colombia's President Juan Manuel Santos, left, as they form for the taking of the official group photo during a summit of heads of state and government representatives from South American and Arab countries in Lima, Peru, Tuesday, Oct. 2, 2012. (AP Photo/Karel Navarro)
AP