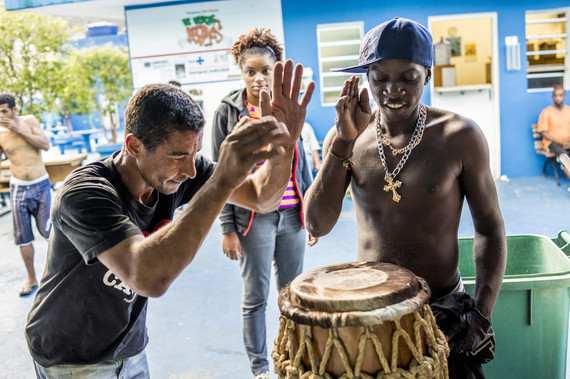 After a fierce mayoral electoral campaign, São Paulo is a city on the verge of a potentially significant political change. The new mayor João Doria, elected on October 2, has promised to roll back many of the programmes associated with the current administration of Fernando Haddad, his left-leaning political rival.

Among Haddad's boldest initiatives were expanding public transportation, building bike lanes and, perhaps most controversially, implementing a harm-reduction approach to homeless crack use in the city's centre. All those programmes now hang in the balance.

For over two decades, São Paulo's downtown has struggled with an area of open drug consumption, nicknamed Cracolândia ("Crackland"). With a floating population of 500 to 2,000, including both homeless and non-homeless users, it is an uncomfortably crowded scene. The area of most intense exchange and use of crack-cocaine is known as the Fluxo, or "flow."

Over the years, city officials have made many attempts to tackle this situation with law enforcement. Drug users were displaced, threatened with prison (and actually imprisoned) and pushed toward in-patient drug treatment.

But Cracolândia has proven incredibly resilient: after days or even hours, users have always gathered again on the streets, rebuilding their tents and reestablishing the Fluxo.

By the end of 2013, with the 2014 World Cup rapidly approaching, Mayor Haddad - then finishing his first year in office - urgently needed an innovative new response to Cracolândia.

Based on advice from harm reduction scholars and activists, in January 2014 the city launched a programme named De Braços Abertos ("With Open Arms"). In contrast to prior law enforcement-based policies, the programme built on research indicating that frequent crack use and non-compliance with treatment correlated with social vulnerability in Brazil.

Hence, De Braços Abertos would emphasise not police monitoring or abstinence from drugs, but social care. Today, the program offers housing, work and food to some 500 Cracolândia frequenters.

That is, at least, until São Paulo's new mayor takes office in January 2017. Doria made closing down De Braços Abertos a campaign promise, calling it "open arms to death". The wealthy, conservative outsider-businessman plans to increase investment in an existing programme, named Recomeço ("Restart"), which is based on abstinence-centred treatment in therapeutic communities.

Given the complexity of problematic drug use as a phenomenon, cities are wise to offer a variety of responses - and indeed some drug users may profit from abstinence-based care.

However, 69% of São Paulo residents approve of Haddad's programme, according to a poll by Brazil's biggest newspaper, Folha de São Paulo. The programme was also praised in an editorial in the same newspaper, which called the results "interesting" as an important complementary option to the predominant abstinence-based models of treatment, which "should not be compulsory (with rare exceptions)".

The decision to cancel it seems like a result of tactical politics not evidence-based policymaking.

In my experience, favouring exclusively abstinence-only programs derives from a misunderstanding of the relationship between social marginalisation, poverty, homelessness and drug use. I also argue that eliminating De Braços Abertos prioritises elite conceptions of how cities should be used and by whom, over human (and humane) consideration of what actually improves the lives and health of the people living in Cracolândia.

All eyes on São Paulo

From 2014 to 2015, I was part of a research team that evaluated the De Braços Abertos programme. As the first Brazilian harm reduction initiative to focus on crack-cocaine - a significant public health challenge in cities across Brazil - the experiment was being closely monitored by places like Rio de Janeiro and Recife.

Alongside Taniele Rui and Maurício Fiore, both from the Centro Brasileiro de Análise e Planejamiento, I undertook a study aimed at assessing the programme's impact on the lives of its beneficiaries.

Of 80 people interviewed, 95% said that the impact on their lives was either positive or very positive; 75% of the 76% who accepted jobs as part of the programme (working is not mandatory) found employment conditions good or excellent. This is particularly important in a highly vulnerable population; 66% of beneficiaries had a history of incarceration, which makes re-socialisation particularly difficult.

In-depth interviews with participants revealed how the appearance of new possibilities - a home, for instance, or a hot meal - has the potential to influence drug consumption.

For instance, Natasha*, a trans woman with a history of involvement with prostitution, said she broke her routine of continuous and daily crack use to a more controlled regime of smoking only on weekends. Wesley*, another beneficiary, informed us that he decreased his daily use from around 12 crack rocks to only two.

In total, 67% of the programme's beneficiaries we surveyed claimed they had reduced crack use after joining De Braços Abertos.

Drug policies are not the only initiatives the new mayor seems likely to change. Under Haddad's administration, the city built hundreds of miles of bike lanes and reduced speed limits in the city's urban highways to 70km an hour.

Like De Braços Abertos, these initiatives were controversial - beloved on the left and reviled on the right. Partially due to such contentious policies, but also because of Haddad's failure to effectively connect with low-income areas and his association with the scandal-ridden Workers' Party, he was deeply unpopular by election time.

Doria, whose platform included indications that he would reestablish higher highway speed limits and eliminate bike lanes, won with more than 50% of the vote - handily trumping Haddad (who garnered 16%).

Like any programme, it has its limitations. No single initiative will "solve" the problematic use of any drug.

Some Cracolândia residents' needs go beyond housing and work. A space for a supervised consumption facility - a classic harm-reduction mechanism - would be useful, for example. Based on their success with heroin consumption in Vancouver, supervised injection facilities are now being launched in France, and considered in Seattle and Strasbourg.

Still, De Braços Abertos has had a groundbreaking impact on health, human rights and policy in a country where the instinctive response to crack addiction has been policing, forced rehab or religious therapeutic communities.

Considering all this, the logical response would seem to be to strengthen and improve DBA in the coming years, perhaps alongside other homeless and drug policies. Vulnerable populations need a variety of care options, not disputing worldviews. Our research indicates that a trade-off between abstinence and harm reduction will not benefit the people of Cracolândia.

On a positive note, the incoming mayor seems open to dialogue. Doria responded to pressure from civil society around transportation policy.

As such, it may be time for harm reduction experts and human right activists to raise their voices and clarify for the future mayor the importance of De Braços Abertos. This programme is not a question of political inclination but rather a product of scientific evidence. It's also about basic respect for the rights and dignity of all citizens of São Paulo, including those who use drugs.

*Names have been changed to protect the anonymity of sources.