Saoirse Ronan was nominated for an Oscar at the age of 13 for "Atonement," but "The Host" might mark her most significant role yet. The new film is based on the popular novel by "Twilight" author Stephenie Meyer, and it's filled with types of things teen audiences have come to expect in their YA adaptations: longing glances, kisses in the rain and two leading men with matinee-idol looks (Jake Abel and Max Irons). The twist is that Ronan's character isn't the next Bella Swan. The American-born Irish actress plays two roles in "The Host": Melanie, one of the last residents of Earth not infected by a peaceful alien race, and Wanderer (or, as she's later known, Wanda), the alien who eventually infects her. (Contact lenses are used to differentiate between aliens and humans; "Sometimes the lenses used to drop, so it looked like I had googly eyes," noted Ronan of the eyewear.)

With "The Host" out on Friday, HuffPost Entertainment spoke to Ronan about her new film, why she'd be extra excited for a possible sequel, and what fans can expect from her upcoming collaborations with Wes Anderson and Ryan Gosling.

You're known for adult-themed films like "Atonement" and "Hanna"; what made you want to dip into the waters of YA fiction? I really liked the story. I loved the concept and I liked that it wasn't solely focusing on the romance of it. The script was very much about the planet and different perspectives on what is good and what is bad. Also, it's about love versus attraction and that whole notion. I thought that was very interesting. One guy is really just in love with the soul of this person, and the other is attracted to them and in love with them as well. I really liked that. I've never done a film before, really, where it has been for a younger audience. It was nice to do that and to have people who my own age -- maybe "Lovely Bones" had a bit of it -- coming up to me and saying, "I've read 'The Host'; I can't wait to see it. I'm happy you're playing Wanda and Melanie." It was really great for me.

Were you a fan of the book before signing on? I read the book before I started shooting. Sometimes I don't. Sometimes I just read the script and that's it; it's a different thing. In this case, though, Stephenie's not just an author of a book who steps back; she's a producer on the film. She was with us every single day and she was very much involved in the film version of her stories -- as she should be. Also, the book is so massive that I knew there would be a lot of detail in the backstory of the characters and of the characters themselves. The worlds that Wanda has visited is only mentioned in the script. It was important to me to have that knowledge in depth.

This seems like a tricky role, because you're playing two distinct characters -- and one of them, Melanie, is internal for most of the film. It was something that took a lot of thought. Because you can really delve into something like that and really differentiate the two characters. That's what I wanted to do. They're very different anyway; they're written very differently through their traits, culture and background and, obviously, they're not the same species. I ended up doing that with the costume department and makeup and also through their physicality, their posture and the way they walk. Obviously their accents: Melanie has a Louisiana accent and Wanda has a very mannered, general American accent. Also, the way they speak and the way are with other people. Melanie is very feisty and has her guard up the whole time; Wanda is completely open and positive and doesn't have any worries that Melanie does.

Do you have any worries or concerns about the idea that "The Host" could blow up in the same fashion as "Twilight"? I just don't, really, think about that kind of stuff. I'm aware of it and I know just from talking to Stephenie the kind of stuff they all went through during the making of "Twilight." There are certain films that have that effect on the world, on pop culture. "Twilight" was such a massive phenomenon; this won't be that. I know it won't be that. I don't want it to be that. It'll be a long time before that happens again. "The Hunger Games" is huge, but the effect that "Twilight" had on pop culture, television on other books being written about the genre was completely different. "Twilight" and "Harry Potter," for people my age, are the really big ones. So I don't think this would do that. I just don't think like that anyway.

Stephenie has discussed writing a sequel to "The Host," and with the way things turned out in this first film, that means you wouldn't be playing Wanda. Will it be hard to let that character go? That's what I really like about it! I don't know what they're going to do about Wanda, because Stephenie hasn't finished the sequel yet, so she needs to lock herself in a room and finish. So, I don't know what's going to happen to Wanda; I mean, they'll have to include her? I don't know what they'll do. For me, I'm chuffed that I get to play a different character. One of the things that would steer me away from a franchise is that I'm playing the same character all the time and I wouldn't want to be known for that. I'm very much about change in what I do, every single time. So I'm delighted that if they do a sequel, and we're all going to do it, I'd be playing someone who is essentially different. I'm done with Wanda now. She's too nice! Melanie's got a fight.

Speaking of other characters, you're in the next Wes Anderson film, "Grand Budapest Hotel." I'm a huge Wes Anderson fan. I literally love every single film. He hasn't made a bad film; I've seen every single one. They've all been brilliant, from "Bottle Rocket" up to "Moonrise Kingdom," they've all been wonderful. You can't say this about any film, but I know the next one is going to be great -- the next one we're all in -- because he follows the formula that he's used to and comfortable with.

You've also got Ryan Gosling's directorial debut in the cards. How has he been as a director in the pre-production process? We haven't really properly started work yet, but I was talking to him about it the other day and I'm so excited about what he wants to do. He's got a very different take on filmmaking and he really wants to experiment and I love that. I'm very excited. 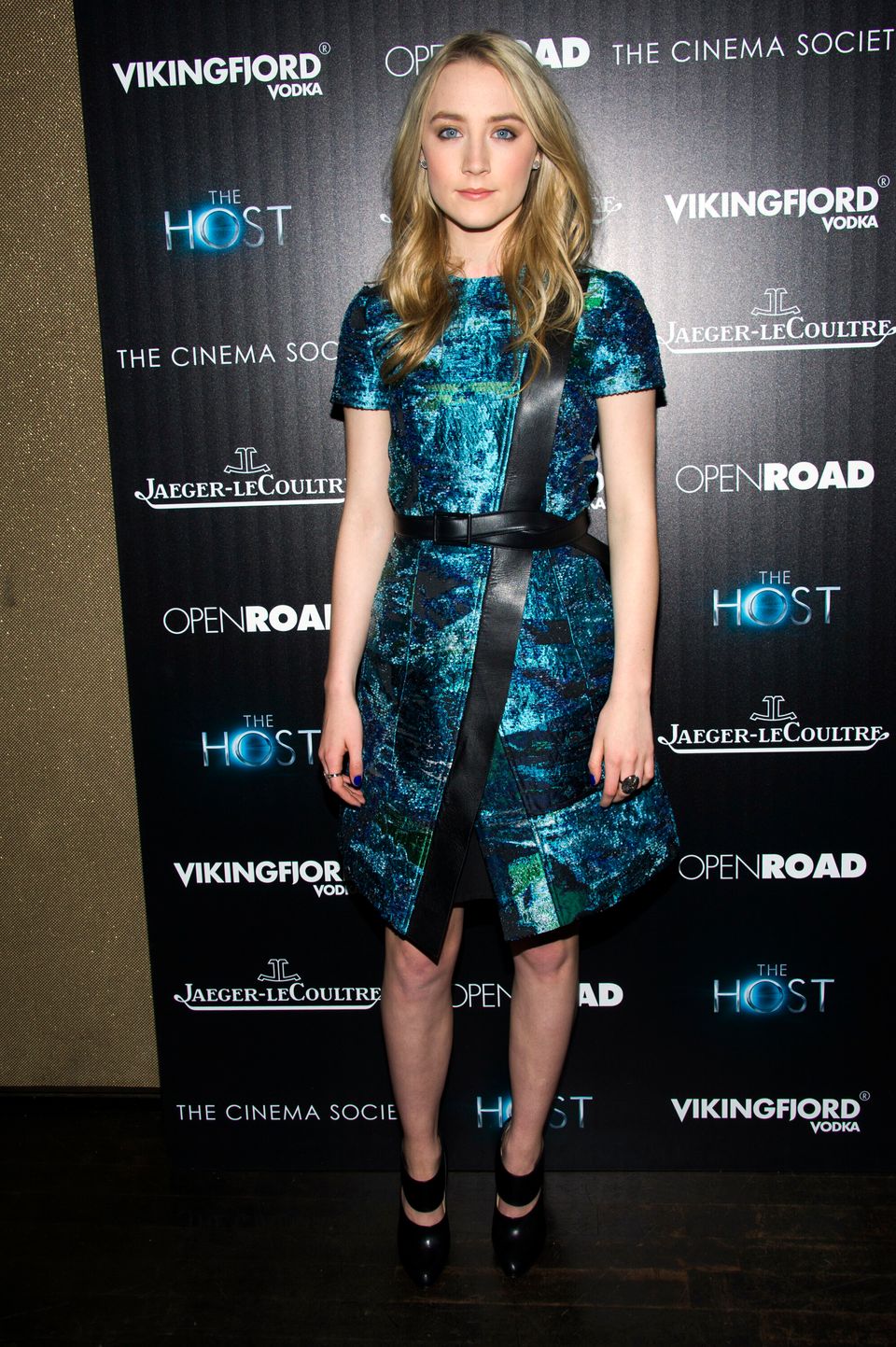 1 / 31
Saoirse Ronan
Saoirse Ronan attends a screening of "The Host" presented by The Cinema Society and Jaeger-LeCoultre on Wednesday, March 27, 2013 in New York. (Photo by Charles Sykes/Invision/AP)
AP