Jonah Hill's brother, Jordan Feldstein, had a rough weekend. After sparring with Kelly and Sharon Osbourne at the annual pre-Grammy bash thrown by Clive Davis and the Recording Academy, Sara Bareilles fired Feldstein, who served as her manager, according to The Hollywood Reporter.

Feldstein, who also manages Maroon 5 and Robin Thicke, was sitting at a table with Bareilles, Taylor Swift and Kelly Osbourne when tensions allegedly broke out over comments he made about Jack Osbourne and his wife. According to reports from THR and E! News, the elder Osbourne marched over after her daughter stormed away from the table. What resulted was an argument that ended with Sharon tossing a plate of food into Feldstein's lap and throwing a bottle of water at his head as he walked away from the scene.

"Sharon walked up to him, pointing her finger and screaming," an eyewitness reportedly told THR.

The incident took place on Saturday, and Feldstein did not attend the Grammys the following night, despite both Bareilles' and Thicke's performances and multiple nominations. The exact nature of the comments he made are not known.

Feldstein's brawl is hardly the first time he's sparked controversy. In November, the music manager married Francesca Eastwood at the Simple Wedding Chapel in Las Vegas, only to have it annulled a week later.

Here's a closer look at the incident, including what looks like the ultimate victory stance from Osbourne: 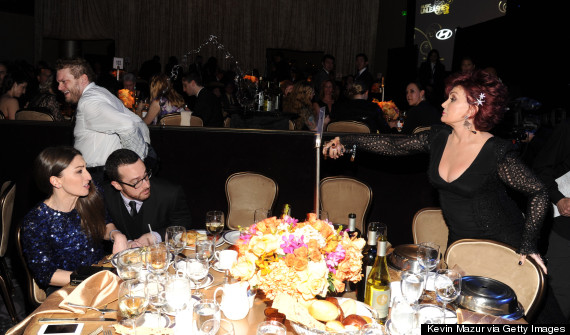 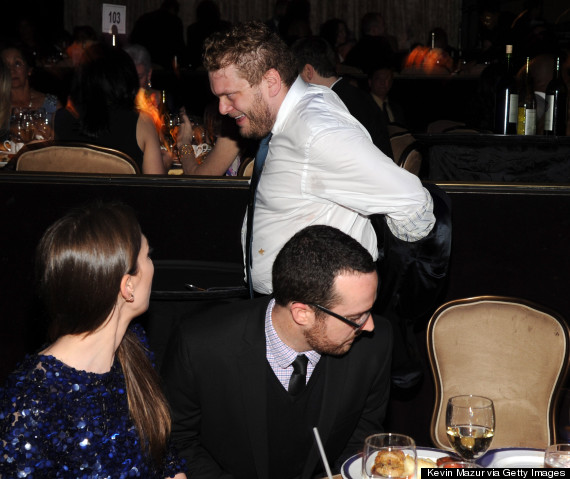