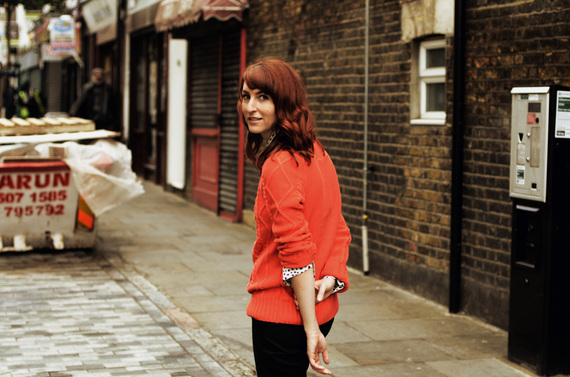 Earlier this summer, I had the pleasure of seeing one of my absolute favorite artists -- the exceptionally talented and wonderfully down-to-earth Sara Bareilles -- in concert during her Little Black Dress Tour. I have loved Sara from the start, and I had always wanted to see her perform love, but never had the chance.

Before the show, I listened to one of the opening acts for a moment, and I remember thinking what I heard was pretty good, though I couldn't recall a song title, specific lyric, or really make any comparisons. So, what I'm saying is that I enjoyed what was happening in the background while I focused on something else. That is how I -- and certainly plenty of others -- "listen" to a lot of the music I hear these days, as there is simply too much to do and too much music. Too much of everything, and not enough time.

I arrived to the show and enjoyed the first act, who I thought was nice enough, and then the second opener came on. Her name is Hannah Georgas, and she was the one I vaguely remember enjoying at some prior moment on my computer. I settled in, and the performance I saw next went above and beyond my expectations. Turns out that while I was just discovering her for the first time, Hannah was no newcomer to the field.

Hannah Georgas is a Canadian singer-songwriter who has quietly built a devoted following, and endeared herself to critics across the country. Since her debut album was released in 2009, she has continually released some of the most heartfelt, well-produced female-fronted instrumental pop out there. Her last effort, a self-titled album, is my personal favorite. It mixes indie cool ("Millions," which was featured on an episode of the show Girls), adorable, simple pop melodies ("Enemies"), and Feist-like delicate vocals throughout. The album earned her nods for Songwriter of the Year and Best Alternative Album at the 2013 Juno Awards, and has earned her at least one new fan.

Listening to her albums -- and I mean actually listening -- will give you a good idea of the phenomenal and underrated pop music Hannah is making, similar to Sara. Both are subtle, unassuming women with exceptionally powerful voices, both literally and in what they are saying and how they phrase it. Working your way through their discographies (which you're sure to do more than once) is a pleasure, but once you've done so, I thoroughly encourage you to see them live. The only thing that could have possibly made Hannah's show better for me would have been if I'd spent more time replaying and learned all the words so I could sing along.