Sara Terry is a media force of nature; an award-winning filmmaker, documentary photographer, and journalist. While working as a staff writer for the Christian Science Monitor, she made a bold move by leaving behind security and striking out on her own to fully unleash her talents as a media communicator. She founded The Aftermath Project in 2003, after documenting what she describes as the other half of the story, the aftermath of war in Bosnia, published as a book in 2005. She moved on to documentary filmmaking with the support of the Sundance Documentary Institute, with a film on a grassroots program in post-war Sierra Leone in 2011. One of the things she describes being most proud of is becoming a 2012 Guggenheim Fellow. Sara is a cherished member of the EverydayClimateChange (ECC) Instagram feed and a confidant on maintaining a high standard of photography and content on the feed. 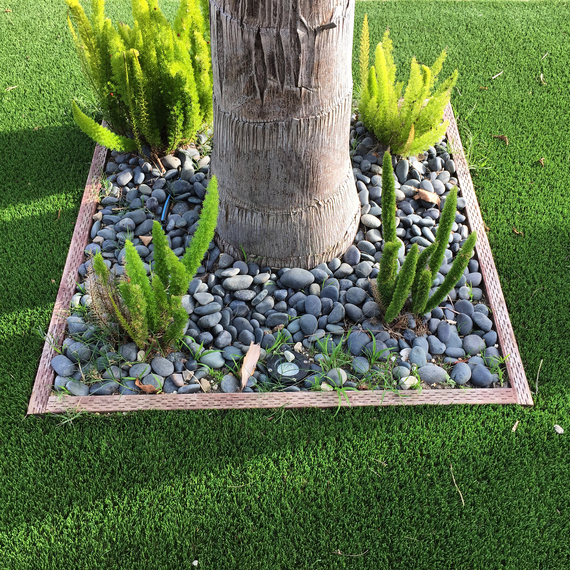 (Photo by Sara Terry @saraterry13 for @everydayclimate change: An artificial grass lawn in Venice Beach, CA.
Scientists reported on Friday that 2014 was the hottest year on earth, since record-keeping began in 1880, undermining claims by climate change contrarians that global warming had somehow stopped. It was also the hottest year on record for California, where many environmental groups are urging citizens to take measures to adapt to the changing climate, to reduce stress on resources like water.

Artificial grass is groomed by brushing it, and occasionally rinsing it with water.)

ECC: You're one of the few photographers on the feed based in North America. How do you see your role in forwarding the conversation about climate change?

Terry: Well I was surprised, and flattered, when you asked me to be on the feed, but I wasn't sure what I could contribute. I've worked a lot in Africa, but on post-conflict issues, not on environmental stories, or climate change. I didn't really have an archive of photos to draw on, and on top of that, I make it a point to only use my iPhone for my Instagram work. So I was a little stumped - what could I add to the conversation? But you were insistent about the importance of having photographers based in the West on the feed, so I said yes. I started out shooting as I was driving through the Sierra Nevadas, on my way to see family in Nevada, and I made my first images for the feed about the impact of climate change on the snow pack in the high Sierras. 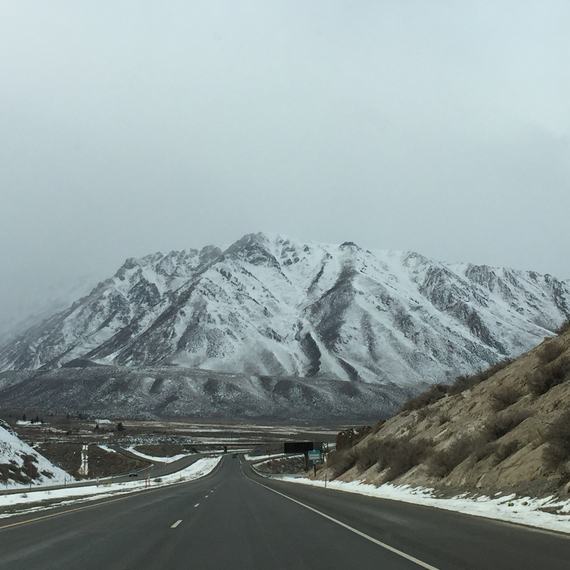 (Photo by Sara Terry @saraterry13 for @everydayclimate change: California's Sierra Nevada mountains (which means "Snowy Range" in Spanish) have been called a "living lab" for climate change. Some of the heaviest snow falls on record in the US have happened here, including the second largest one-day snowfall (5.6 ft at Echo Summit on Jan 4, 1982).
heat
Since 1895, the average temperature across California has increased by 1.7 degrees, and experts say the most visible effects of that warming occur within the Sierra Nevadas, where low temperatures are rising and precipitation increasingly falls as rain rather than snow. In parts of the 4 million acres of federally-protected land that take up much of the range, scientists have recorded marsh meadows going dry, wildflowers blooming earlier, and glaciers melting into ice fields.

The first snow survey of the season, made in late December, found more snow than last year at this time thanks to December storms, but not enough to impact the California drought. Eighty percent of the state is in extreme or exceptional drought conditions, and snow pack in the Sierra Nevada range has historically been an important source of drinking water for a good portion of the state.)

ECC: How does that play out for you on the EverydayClimateChange feed?

Terry: I feel that it's really important to cover climate change as an issue here in the US, and that doesn't necessarily make for pretty pictures. I've had to be more creative in finding images that can help tell the story. I do a lot of research and reporting on what's happening locally - how cities or citizens are grappling with climate change right where they are. A lot of the feed shows the consequences of climate change in other parts of the world - some of it quite dire - but I think we need to be equally committed to showing images that are about climate adaptability. Whenever I travel, I Google the name of the place where I am and the words "climate change" and I'm always amazed at what pops up. I loved learning more about Chicago's urban bike program, and similar programs in other cities, and the way those efforts are growing as a direct attempt to adapt our lifestyles so that we lessen our impact, however minimally, on climate change. 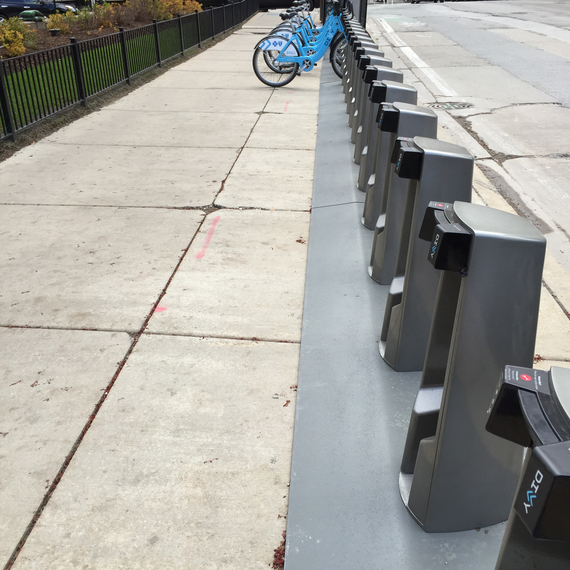 (Photo by Sara Terry @saraterry13 for @everydayclimate change. "Divvy," Chicago's public bike-sharing program was launched in 2013. Some 3,000 bikes at 300 stations around the city are available 24/7 for a modest fee.

Bike sharing programs continue to grow in popularity throughout the world: some 50 cities in the US now have them, and more than 600 cities world-wide. The Earth Policy Institute predicts there will be 38,000 bikes in public-sharing programs in the US by the end of 2015.

According to Climate Focus, the transport sector is the fastest growing source of greenhouse gas emissions worldwide. A bicycle is nearly 10 times more carbon-efficient than the most efficient of petrol cars.) 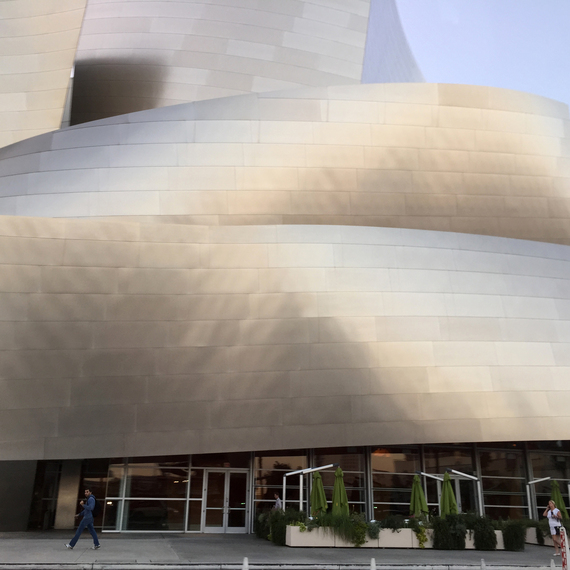 Although Gehry didn't have geoengineering in mind when he designed the much-loved building, "reflective surfaces" (including building and street materials) are one way proponents of geoengineering say that urban temperatures can be cooled - which in turn can reduce air-conditioning use and diminish smog. Not all researchers agree, however, and in the case of Disney Hall, some of its stainless-steel walls had to be modified because they actually increased heat in some spots nearby. [Again, Gehry did NOT design Design Hall with principles of geoengineering in mind.]

Overall, geoengineering remains very controversial among climate change researchers, largely because no one knows the long-term consequences of large-scale interventions to counter global warming, such fertilizing the ocean (to increase plankton production) or putting mirrors in space to reflect sunlight away from the earth. Geoengineering is considered a plan B approach (with the reduction of carbon emissions considered as plan A), and is considered inevitable by some scientists, and dangerous by others.
Last week, the National Research Council released a two-volume report recommending that the US government fund a research program into geoengineering as a response to global warming - a report which was greeted with both criticism and enthusiasm among scientists.)

ECC: You were a print journalist for twenty years before becoming a documentary photographer and filmmaker. How are you using those skills in your ECC work?

Terry: Well, I'm doing more research than I normally do. Usually I shoot because I'm moved by something, or interested in it. With my own projects, I'm not necessarily shooting literally - I often look for metaphorical images. But with my ECC photos, I do a lot of reading and then try to find pictures that can help bring what I'm learning to life. I dove deep into geo-engineering for a while, because I was fascinated by all the work that's going on in that field to try to adapt to climate change - and because it's very controversial among climate change researchers. I was particularly fascinated by reflective surface engineering, which uses buildings and street materials as a way to reduce urban temperatures, which in turn can reduce air-conditioning use. So I shot Frank Gehry's amazing building, Disney Hall, in downtown Los Angeles as an example of reflective surfaces (though Gehry didn't have those principles in mind when he built the hall).

I also found out, while doing some other research, that the city of Burbank, which is part of the LA metro area, is one of the leaders in the US in reducing greenhouse gas emissions - they're way ahead of most other cities. So I went and shot a power plant which they've converted to high-efficiency natural gas, cutting emissions by 98 percent. Which led to a great comment on the feed, about natural gas and fracking - which prompted me to call the deputy general manager of the plant to find out more, and I learned that the city is planning to phase out that plant in another twenty years, as it continues to build renewable energy resources. And I was amazed to learn about this whole community of engineers, that he's a part of, who are doing all kinds of incredible research. So there's a lot of reporting that goes into the individual images for me. 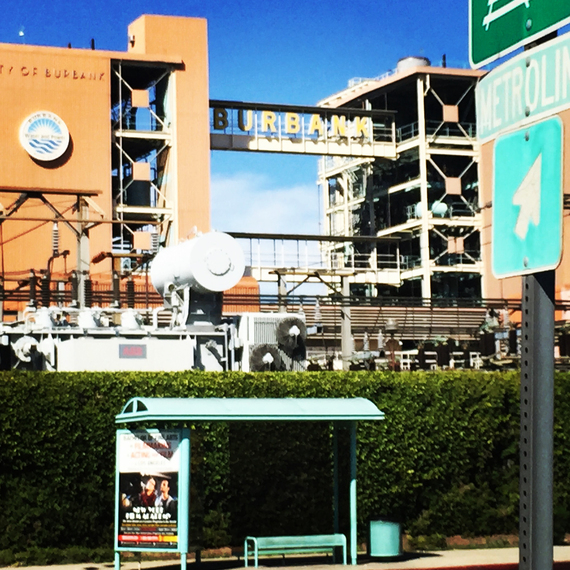 (Photo by Sara Terry @saraterry13 for @everydayclimate change: The city of Burbank, in the Los Angeles metro region, has become a leader in reducing greenhouse gas emissions in the US. Its Magnolia Power Plant, a high-effiiciency natural gas unit which replaced four WWII-era plants, went into service in 2005. MPP produces 98 percent fewer emissions than those plants, generates more power and uses less fuel. It has won several design and sustainability awards.)

Terry continues: I think the captions are a really important part of the feed. I see so many people commenting on the feed about what they're learning from it. I always feel the need to be very specific in explaining how something relates to climate change, not just writing a caption that hangs everything on vague generalities about "global warming."

Here in California, for example, the four-year drought we're in has historic precedent - droughts happen here. You can't blame it all on climate change. However, there is some research by climate change scientists that show how climate change is exacerbating the drought. I try to make that clear when I post images that relate to the drought.

I also try to write captions and find photos that encourage people to think or act differently in their own lives. I use ECC hashtags like #climatechangeisreal and #globalwarming - but I also try to include #dosomething in everything I post, and sometimes #thereareanswers, because I think it's so important for us to know that we can affect positive change. We may not be able to stop climate change, or even reverse it, but we can absolutely live our lives differently, so that we can lessen the damage that's been done.

You can learn more about Sara Terry's work at www.saraterry.com or at her personal Instagram feed: @saraterry13.