Sara Zielinski recently visited painter Max Ginsburg in his studio to talk about his his politically and emotionally charged paintings. For more than sixty years, Ginsburg has painted from life. In addition to his extensive collection of paintings about the struggle of people in the real world, he has illustrated the covers of hundreds of novels, including A Separate Peace by John Knowles and Roll of Thunder, Hear My Cry by Mildred Taylor. Ginsburg's paintings belong to the unique category of Social Realism; they are traditionally painted with exceptional skill and reflect strong social and political views. 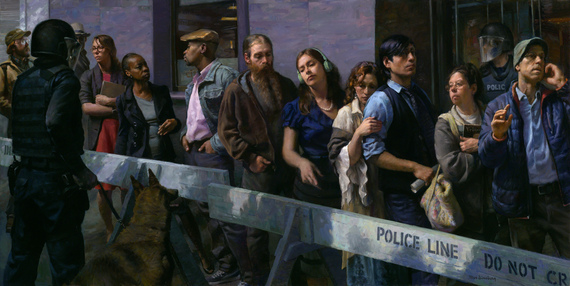 Your work is classified as social realism. Can you talk a bit about the form?

Social refers to the concepts or subjects of my paintings, which are about life in the real world. It is about the human conditions that I see and experience on the streets of New York and it is about issues of war and peace, justice and injustice, and, in general, the tragedies as well as the joys in our lives. The realism of the content is the truthfulness of the social situation. John Keats said "Truth is beauty..." which for me means that it is beautiful to face reality, not to falsify or glamorize or avoid it like so many Germans did in Nazi Germany when they saw Jews disappearing from their neighborhoods or like we do when we fail to speak up or "blow the whistle" about injustice fearing for our own insecurity.

The realism of the form is the realistic or natural appearance of the images, especially the human forms. For me, there is an aesthetic beauty of the human form. As a humanist I cannot accept the mangled abstraction of the human form as seen in much of modern art.

I believe that the realism of form can communicate ideas most effectively.

You paint in a traditional manner, taking cues from masters like Goya and Sorolla, while depicting scenes that speak directly to topical issues, like your recent paintings about foreclosure, Abu Ghraib, and long unemployment lines. Are there artists whom you admire both for their artistic skill and for rebelling through their subject matter?

There are artists whose work I think is beautiful and well-painted. For example, John Singer Sargent is a masterful painter, but he was painting a different reality, that of an aristocratic world. I identify much more with painters like Dagnan-Bouveret and Jean-Francois Millet who painted French peasants naturalistically and Joaquin Sorolla y Bastida who expressed in his paintings a strong earthy feeling for ordinary Spanish people. The Russian painter Ilya Repin and the American painter Winslow Homer also expressed the reality of life of ordinary people in a realistic and skillful manner.

On the other hand I admire Francisco De Goya for his anti-war expressions, Disasters of War. But in my painting Torture Abu Ghraib, I am only partially inspired by Disasters of War. In terms of skillfully painted form, it was the Crucifixion paintings of the Old Masters, especially Michelangelo Merisi da Caravaggio, that inspired me. 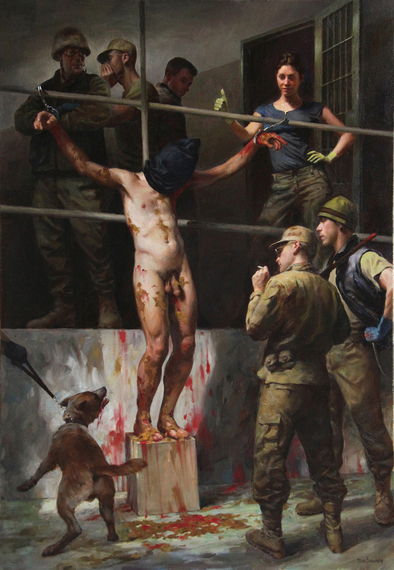 Your work and my work are very different in many ways, but we both use people as our primary subjects. Where does your interest in the human form and human expression come from?

My interest in "human expression" comes from my high regard for humanity or the people. As a student, I learned about democratic values and justice for all. These values have entered into my art. So when I see injustice and hypocrisy I express my outrage and conversely I express joy when I see positive human experiences. I have been influenced by many of the Old Masters regarding their expressions about life. Kaethe Kollwitz's etching of a man holding a child and the mother proudly observing the relationship is a beautiful and positive portrayal of life. On the other hand she expressed tragedy in her lithograph of a woman searching a battlefield for her dead son.

As for the "human form," there is a beauty in the human form. I find it aesthetically beautiful as an art form. When this form is abstracted or even badly drawn, it is dehumanized. Observing the uniqueness of the human form every time I paint the model is my artistic goal. Painting this form naturalistically most truly reflects its reality. 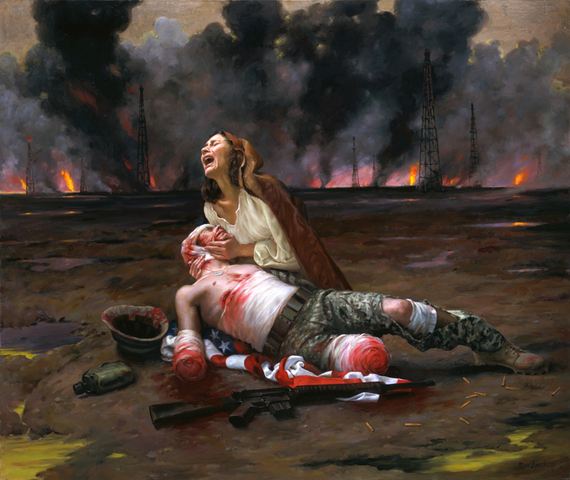 Let's talk about War Pieta. This image is so powerful. Can you talk about your motivations behind making this painting? Why a pieta?

The Iraq War was an unjust, devastating inhuman horror. My painting, War Pieta, of a mother in anguish over the loss of her son singularly symbolized the horror of war. I felt the Pieta image of the Madonna mourning the death of her son Jesus would resonate with the predominantly Christian American public. So I used this imagery in the contemporary setting of the Iraq War. I also wanted to address the hypocrisy of our former President George Bush who claimed to be devoutly religious and then lied to the American people about the reasons for starting the war. The symbolism of the burning oil fields was to address the real reason for the war, which was "blood for oil."

Unemployed On Line, Torture Abu Ghraib, War Pieta, and additional works by Max Ginsburg can be found at www.maxginsburg.com. To see work from his illustration career, visit www.ginsburgillustration.com.