I recently sat down with Raul Gonzalez III to talk about the origins of his work and new directions in his work. Raul grew up in El Paso, Texas and Juarez, Mexico and is now based in Boston, MA. Raul is currently working on the sequel to his very popular graphic novel for kids, Lowriders in Space, a collaborative project with Cathy Camper. (Look for Part II of this interview for more on Lowriders in Space.) 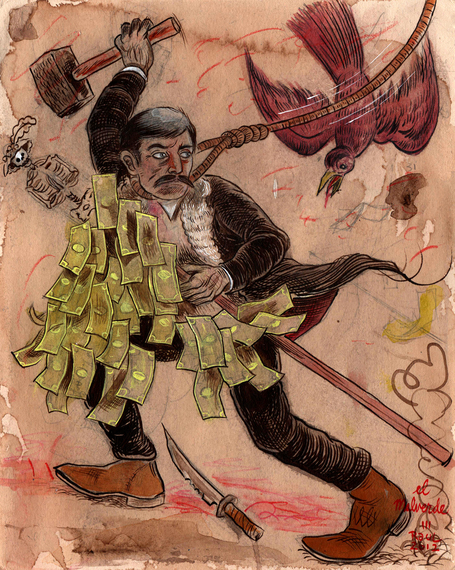 In your work I see elements of classical and popular culture, and historical and personal references. Can you tell me about your process and how you pull from diverse inspirations to create your own narratives and structures?
I'm usually working on a specific series or a body of work that could extend into multiple drawings. For instance, in the case of Los Nuevos Guerreros, that series started out as 101 drawings. I was inspired by multiple things. One of the major sources of inspiration was the border town I grew up in: El Paso, Texas and Juarez, Mexico. I was inspired both my own experience there in the late '70s, '80s, and '90s, when I was growing up and simultaneously by a lot of the tension and violence that has occurred there since I left. That comes from Juarez becoming the murder capital of the world in the 2000s because of the drug war. It comes from the tensions along the border in regards to immigration. I was pulling from headlines, stories told to me by family and friends living in the area, and books that I was reading about both the history and contemporary situations there.

To find an anchor for the series and an art historical context, I wanted to create portraits of the warriors or citizens of the cities. I decided to make an adaptation of Utagawa Kuniyoshi's 101 Samurai, and I drew each and every Samurai, but with a very Mexican-American twist. 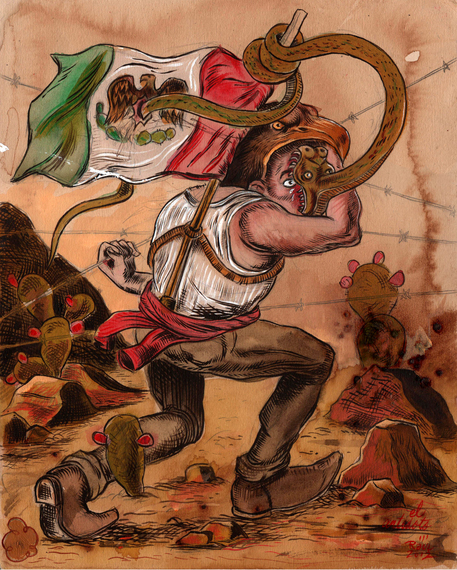 Let's talk about some of the more graphic and gruesome parts of your work. In your images, we find weapons, blood, bruises, and penises, sometimes with fluids coming out of them. What are you telling us about violence?
The source for that work was the Samurai series. Violence was heavily on my mind as I was creating this work. There's one particular drawing that I think captures my main concern about the violence that is still occurring in Mexico and affecting citizens in both Mexico and the United States. It's a painting titled Born Again. It's a portrait of this boy and he is just staring off into the distance. On either side of him is almost a shell of what he used to be, just seconds before. He looks exactly the same but there is something in his eyes that is forever different and forever affected because of something horrific that he's just witnessed.

That is the biggest concern that I have - how these events forever changed a lot of the youth that is growing up in that area at this moment in time. My work is filled with a lot of these violent images, but the drawings can never truly match the reality of the situation. As violent as the drawings could appear to be, they aren't anywhere near the real violence that has occurred. 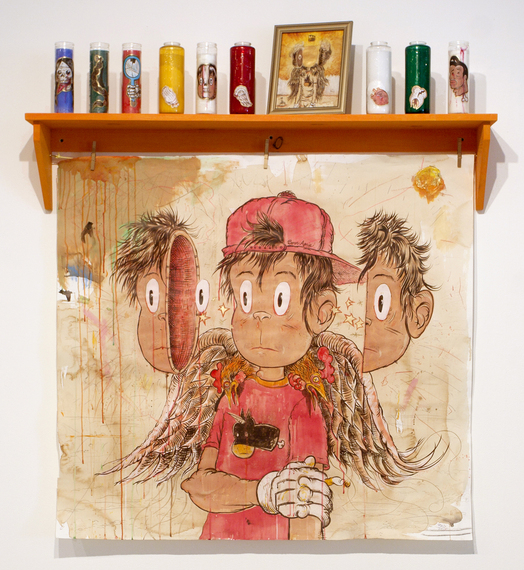 There is a strong social message to your work.
I feel like my drawings can make people aware of situations that they haven't been aware of before. I know that was the case in the series of drawings that I was creating on bed sheets. That was a series of portraits titled Quién Fue El Numero Uno? which was a series of portraits of women's hair-dos on bed sheets. Those hairdos were drawn from posters of women who had gone missing in the Juarez area. They were drawn on bed sheets because of how the women were later found in the Sonoran Desert wrapped up in bed sheets. When this series was first exhibited, many people had been completely unaware of that situation and these paintings made them aware of what had occurred. 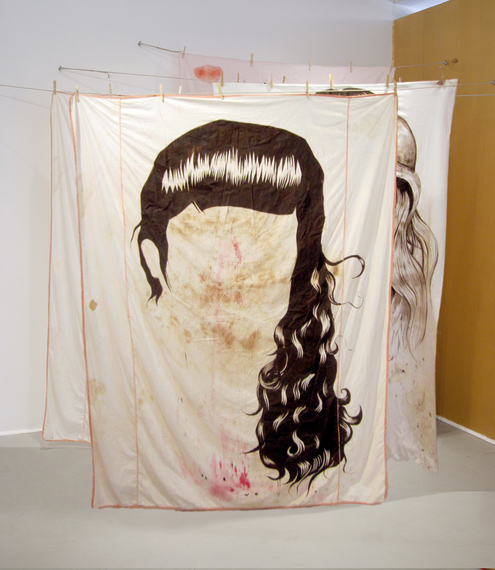 I often wonder, why am I drawing these things? What is the importance of them? Is it necessary? It's a struggle that I have. Because I'm exhibiting them here in the Northeast, the audience that's seeing the work isn't necessarily an audience that is affected in any way by the situations that I'm drawing. But then I feel that it is incredibly important to be creating this work because these are works of art that should be included in our museums; these are topics and subjects that are usually brushed over. When you walk into a museum, you never see the nasty parts of our history exhibited on the walls. And I feel my work kind of fills in or tells these stories that we might want to look away from.

How did you develop this component to your work?
It wasn't until I moved here to the Northeast and walking through museums here that I really started to want to tell or draw stories that were from my place of origin. When I lived in El Paso for 20-some years, it never crossed my mind. Instead I was drawing imaginative cityscapes and comics about the big city even though I had never lived there. I was trying to draw where I wanted to be as opposed to where I was. Then when I made it to the big city, I started to focus my attention on my place of origin. I feel it was mainly because I noticed that there wasn't anyone - maybe there was but I didn't see it - there wasn't anyone being a voice for this community and I wanted to tell our story. A big goal of mine, especially with the children's books, is to make stories for a more diverse cast of characters. 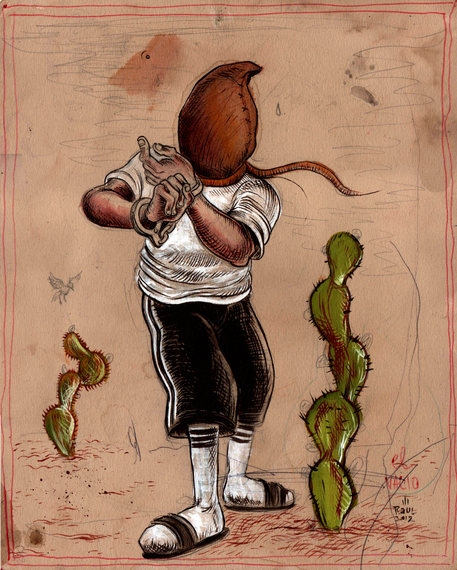 El Vacio, 2012.
All Images courtesy of the artist and Carroll and Sons.

Additional Works by Raul Gonzalez III can be found at www.artbyraul.com and www.carrollandsons.net. Lowriders in Space can be purchased through Chronicle Books or Amazon.com.