The average American news reader knows something about international refugees. For example, they might know which presidential candidate wants us to increase refugee intake and which vehemently opposes welcoming more into the country. They’re also probably aware of the current Syrian refugee crisis, that a team of refugees competed at the 2016 Rio Olympics, and they have probably formed an opinion on what the United States should or shouldn’t do to help.

Seldom heard in the conversation surrounding refugee issues, however, are intimate descriptions of what life is like for a single person displaced from their home country due to persecution or conflict. It’s far too easy to think of “refugees” as a mass, as a series of numbers, statistics or policies.

How does a journalist find these personal stories? And how do the stories reach an audience? Sarah Glidden tackles these questions in a book of comics journalism that chronicles her 2010 trip to Turkey, Iraq and Syria, Rolling Blackouts. In it, she travels alongside a group of journalists and an Iraq War veteran to see how reporting works firsthand ― how sources are located, how stories unfold.

Along the way, Glidden meets with people who have had to leave their homes for various reasons. One couple left to avoid prison time for publishing things not approved by the Iranian government. Another girl, who left Iraq with her family after violence against Christians rose in her region, is shown waiting for hours for bimonthly food rations in Syria, at the time a place of refuge for Iraqis.

The phrase “comics journalism” may baffle some. How do narrative drawings and reporting intersect? Can the time-consuming process of formatting, drawing, inking and coloring match the quick pace of news?

Rolling Blackouts shows just how the genre can work. Because the refugee crisis is ongoing, hardly tied to one particular era in time, a slow and steady approach to understanding the fallout seems apt. A book-length work allows the nuances of a long-simmering issue to come through.

“For my kind of comics journalism, I think that it’s good for kind of slowing stories down and really letting readers form a connection with the person who I’m talking to. Or, in the case of this book, who the reporters are talking to,” Glidden said in a phone conversation with The Huffington Post.

And literally painting a picture for readers allows for immersion in the story. Geometric cityscapes and rolling landscapes are aspects lost when an experience is only conveyed in words. Glidden’s tableaux pack in the kind of intimacy and sensory information that is missing from more traditional forms of information sharing. “Maybe some people ― who might look over, or pass over, a book on meta-journalism and on refugee issues ― might take a second look at something that’s in comic form,” Glidden added.

An Iraqi Kurdish man named Sam Malkandi is a standout “character” in Glidden’s narrative. Malkandi had immigrated to the United States and established a comfortable life in Seattle, until a chance encounter at a mall inadvertently led to his deportation back to Iraq. The father had to leave his wife and children behind — he mentions that his daughter is graduating from the University of Washington — and now lives with his own elderly father. Despite those hardships, he shows up in Glidden’s work as affable and welcoming.

“I hope that someone learning about him through this comic will maybe not only get interested in his story and want to find out more, but also feel like they know someone from Iraqi Kurdistan now,” Glidden said, “that when they hear ‘Kurds’ or ‘Iraqi Kurdistan’ or ‘KRG’ in the news, they’ll connect it back to this man that they got to know.”

Glidden makes sure to distinguish this work from her previous one, How to Understand Israel in 60 Days Or Less, a memoir. She began as a comics artist in this vein, she said, after being exposed to works like Marjane Satrapi’s Persepolis, Art Spiegelman’s Maus and Joe Sacco’s Palestine. Glidden was also inspired after seeing James Kochalka’s American Elf series, which was “just about the quotidian details of his life, and that was something that seemed accessible.”

Following a trip to Israel for her first book, Glidden found herself thinking about a potential reported project. “I started really getting into the research aspects of it and trying to look at different sides of a political issue, and that’s when I started thinking like, OK, maybe I can do work that moves in that direction.” She was working on that book when she met the journalists featured in Rolling Blackouts. “I was working in comics, and at the same time talking to them about their experiences as journalists and getting more interested in finding out about how they work.”

She’s still present in this second book, but more in a minor way. “I guess I’m coming from the school of journalism where you don’t really believe in objectivity,” Glidden said. “Part of the reason I like comics journalism is that, by drawing, you’re kind of showing with every single panel that it is subjective. Somebody not only witnessed all of this stuff, but somebody drew it. I hope that the medium of comics itself reinforces that idea, that, hey, remember, somebody is telling you this story. Somebody is choosing what’s important.”

When it’s put this way, the line between memoir and journalism becomes blurrier; it’s all about storytelling, in the end.

The fact that Glidden’s book tells not only the story of this trip but also the nuts and bolts of how a story comes into being heightens its longevity and relevance. “Our lives aren’t narrative. Our lives are these very complex collections of moments, but when we’re remembering something or telling a story to someone else, we’re constructing a narrative out of our lives,” she said. “As a journalist, you’re listening to someone’s narrative and then constructing a new, different narrative out of that narrative.”

The group in Rolling Blackouts travels through the Middle East, eventually ending up in Damascus, Syria. There, the complications and lasting effects of the war are laid bare. In one scene, a contact tells the war veteran, Dan, “It’s a crime! You’ve done the biggest crime in the world.” A page later, the same man pats Dan’s back, reassuring him that it’s OK, that he understands what it’s like to be a soldier. There are tense, unflinching moments like these, and also lighthearted ones, when Sarah joins the other journalists at an impromptu dance party at an Iraqi artist couple’s house. As Glidden said, lives aren’t narrative. Instead of telling a single story with rising and falling action, Rolling Blackouts offers a glimpse into many lives affected by a major war, with highs and lows throughout.

The book tackles heavy subjects: the U.S. invasion of Iraq and how we should help refugees from a conflict we’ve created. There are big questions at the heart of it ― questions asked by some of the individuals they meet that the journalists cannot answer. “I think we can focus now on, ‘This happened. And what are we going to do about it?’” Glidden said. “As Sarah [the journalist] says in the book, our generation is inheriting this tragic war that happened, and that is still ongoing. The fallout from that extends to not just Iraq but to Syria, and to Libya, and to all these other places.”

“Right now, we hear about Syrian refugees a lot, and we hear politicians saying ridiculous things like, ‘We don’t know who these people are,’ ‘They’re not vetted,’” said Glidden. “I know now, from talking to refugees themselves, or people who are working with refugees and NGOs and from the United Nations, that this is a huge distortion of the truth ... I think it’s important to know just how complicated it is to be a refugee and how rare resettlement is.”

Glidden’s final section, “Home,” offers an epilogue of sorts, showing what became of the articles researched while abroad, the cover story about Dan’s return to Iraq as a civilian, her own first forays into comics journalism. It’s a stark reminder that the problems presented in the bulk of the book haven’t ended with the last page; in some ways, they have grown and evolved. Even though she chronicles a trip taken nearly six years ago, Glidden’s work feels as it could fit in among 2016’s headlines, urgent and compelling.

Sarah Glidden will be on tour in the United States and Canada this fall. Rolling Blackouts is out now. 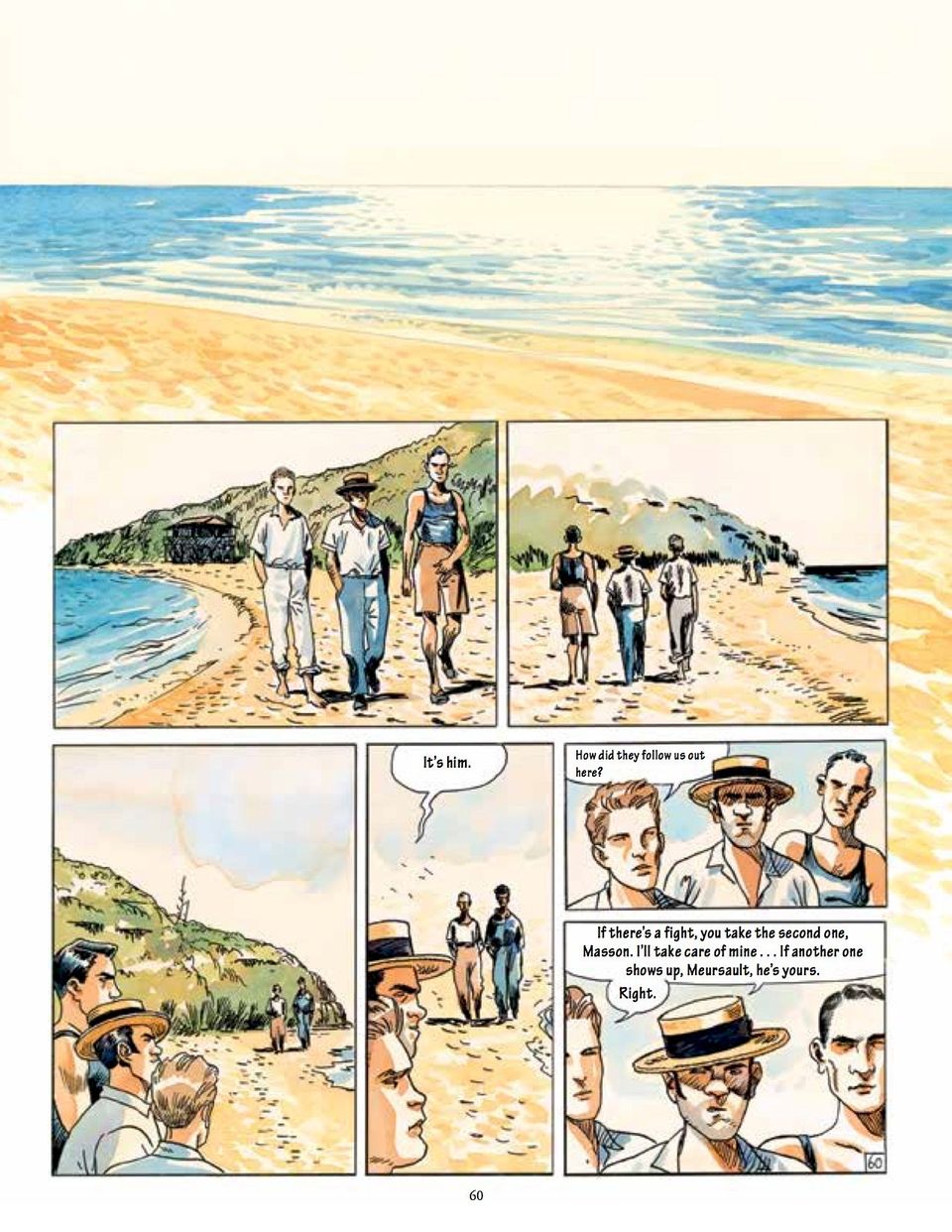