Tyler, the sultry rock royal and star of coming philosophical thriller "The Ledge," is often the object of fan art -- including a recent photograph by Theo Wenner, her 24-year-old boyfriend, that appeared in the catalogue of collector Johnny Pigozzi's Limoland fashion line. Their combined wattage, together with that of the evening's honorees, artists Fred Tomaselli, Fred Wilson, and Lorna Simpson, was enough to draw 600 people to the not-so-centrally-located museum for an energetic evening of art-themed partying.

And where was the art? Well, Sean Capone contributed an array of colorful, pulsating projection pieces for the party room, alongside a few biomorphic site-specific installations by Situ Studio. But the main visual extravaganza was to be found in the cavernous great hall, where 16 up-and-coming artists decorated long banquet tables with artful centerpieces, some quite complex. Among the contributors were Dustin Yellin, Anya Kielar, Angel Otero, Vadis Turner, Duke Riley, and Sara VanDerBeek.

More of Today's News from ARTINFO:
Faces in the Crowd: Yeah Yeah Yeahs Guitarist Nick Zinner on Secretly Photographing His Fans, for Art's Sake
L.A. on the Hudson
"I Feel Like Holden Caulfield": Shepard Fairey on His Urge to Communicate, the MOCA Street Art Controversy, and His Thoughts on Obama 2012
Is Baby Art Morally Defensible?: Swiss Artists Offer Parents $10,000 to Name Their Newborns "Dada"
Berlin Gallery Weekend: Ai Weiwei's Haunted Garden, a Tribute to Snoopy, and an Explosion of German Painting 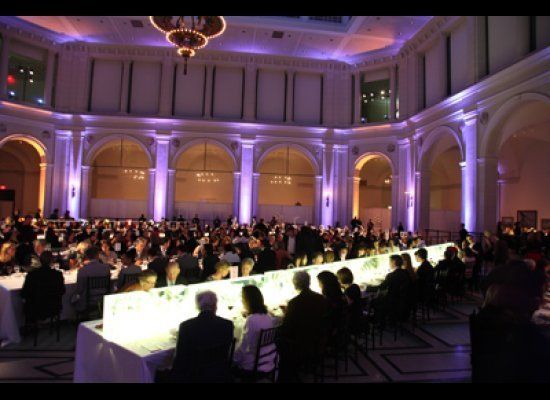