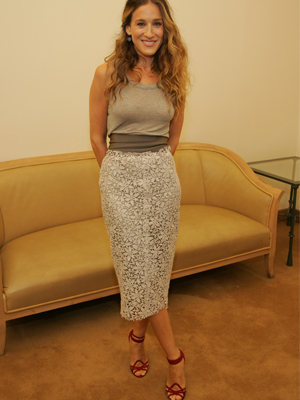 "In a silly way, I think it's what people have expected of me most because of Carrie Bradshaw," says Sarah Jessica Parker. But it's not silly at all, this idea that the actress-mother-designer-business woman-multi-hyphenate could launch a serious shoe collection, which is exactly what she's doing with partner George Malkemus, the longtime CEO at Manolo Blahnik. SJP, as it will be called, will be available exclusively at Nordstrom early next year and will include bags and a few trenches, too.

"It's sort of soup to nuts," Parker continues. "You put on a shoe and you put on a coat and you wear a bag and, on the outside, when you're walking down the street, they really can tell the same story about yourself."

Of course, the last thing Parker herself or the world at large needs is more shoes and bags. That's why her goal is to offer something different, something more in the vein--aesthetically and price-wise--of great old-school labels like Charles Jourdan and Maud Frizon. SEE MORE: 2013 Fashion Trends: Denim Guide

"We're putting new colors together that people don't typically do, just beautiful combinations that you wish existed in your closet," she says. "And in terms of bags, thinking about that period of the seventies into the eighties, what those women were carrying, taking away the bells and the whistles and hardware and really making it about the bag."

In other words, these are not the over-the-top crystals-and-marabou-covered confections that nearly pushed Carrie into bankruptcy. Single-sole pumps and flats will range from around $200 to $300, and bags will likely sell for under $700. Even better: Everything will be produced in Europe and New York City (though production location for the trenches is still being decided). "Because I got to play that role, I wore a lot of shoes," Parker says, "and by default I learned an enormous amount. It's hard to"--no pun intended--"walk away from that."

The Great Gatsby: Behind the Costumes

The Sexiest You: Lingerie Guide 10 Best Beauty Secrets and Tips

More:
Celebrity StyleSarah Jessica ParkerShoesSex and the CityFashion
Newsletter Sign Up
An essential daily guide to achieving the good life
Subscribe to our lifestyle email.
Successfully Subscribed!
Realness delivered to your inbox