When was the last time you borrowed a cup of sugar from the neighbors? Better yet, do you even know the neighbors' names?

According to Sarah Leary, 42, and statistics from Nextdoor, the social network she co-founded with CEO Nirav Tolia, only 26 percent of people actually speak to their neighbors. This depressing number makes it seem as though the days of "Friends" and "I Love Lucy" are over.

"We obviously thought a lot about what was happening out there with Facebook and LinkedIn, and saw that there was a missed opportunity," Leary said in an interview with The Huffington Post.

Nextdoor said last month investors had given the site $18.6 million to expand. Nextdoor, a social network for neighborhoods that began operating last fall, is like a Facebook for small communities. The site already has more than 3,600 neighborhoods in 48 states, according to Mashable.

Leary previously worked at Microsoft with Bill Gates, and at eBay during the Meg Whitman years. She was also an "entrepreneur in residence" at venture capital firm Benchmark before starting her own social networking company.

Recently we talked with Leary about Microsoft in its early days, her advice on jumping into the tech industry, and the launch of Nextdoor.

What was it like working at Microsoft as a woman in the early-'90s?

The woman who hired me at Microsoft was named Melinda French. She is now Melinda French Gates. So my first entry into technology was actually working in a division that was run by a female executive. Luckily enough, I’ve been able to work with some very strong women over that period of time -– which is not something you normally hear about.

And I think one thing to note: I don’t feel uncomfortable being in a room full of guys. I was a college athlete. I was used to being in intense competitive situations, and don’t shy away from that. That’s a key part of being successful in Silicon Valley ... that, and knowing your stuff.

What did you learn form working at Microsoft? How did that information help you with your own business ventures and Nextdoor?

I think Microsoft was special in that it understood that the most valuable asset of any company is not the technology or the patents -- it's the people or the talent that you recruit. And that was something Bill Gates talked about all the time. I remember him saying "Our most valuable assets drive home every day."

Speaking of Bill Gates, did you ever interact with him?

Bill was a very big personality at Microsoft every single day during the period of time I was there. His vision, his drive, his work ethic -- it permeated that place. I was fortunate enough to have the opportunity to be present with him many times, and every single time my stomach would have a pit in it!

I was also in a few meetings where he wasn't very happy and I got to hear that feedback too. But I think that the most important thing was that everyone at Microsoft had an incredible amount of respect for Bill and felt like we were lucky to have him as our leader.

Do you have any advice to women who are trying to jump into the tech field?

The biggest piece of advice that I would give people is to not shy away from the technical details that are underlying what we are building in the technology field. I think far too many women shy away from some of these fields in college and that puts them at a disadvantage. I encourage people in their first job to learn how to write HTML, and get comfortable with the technical language because that will mean you can be included in any conversation.

The second thing that I tell them is to work with people who have been successful so you can learn how to be world-class at something. The third thing I would point out is that early in your career it’s fantastic to be working at companies who are growing really fast.

Now you are a co-founder and the vice president of marketing at Nextdoor. Can you talk a little bit about the idea behind this social networking platform?

We describe our site as a private social network for your neighborhood. But we really see ourselves as sitting at this interesting intersection between two important trends that you hear a lot about in the Valley, which is social and, increasingly, local.

Facebook has grown to over 900 million users, Twitter has over 500 million and LinkedIn [has] over 150 [million]. It is very clear that people are comfortable with social networks. But we also noticed that there was a very important area in life that was missing from this whole constellation of social networks: the neighborhood.

So you've found that people have lost touch with their neighbors? Why is this important?

There is a large body of research from Professor Robert Putnam at Harvard, basically pointing to social networks as being important in improving the quality of life in our neighborhoods. He has found that social networks existing in neighborhoods lower crime, improve public health, and raise test scores.

What are a few features you had to think about when beginning Nextdoor?

You have to nail privacy. We have invested a lot of technology in building exclusive websites. Every single neighborhood has a boundary that is defined down to the individual residence level. We also have blocked any access to these websites by search engines.

The next thing is thinking about scale. But if you don't know your neighbor's name, you probably don't know their email address. So we have also invested in other offline mechanisms to help neighbors connect with one another online through fliers and postcard invitations.

The third thing that we've focused on is building a service that actually works. We wanted a site that would solve the real problems that people face in their neighborhood. So for example, can I  get a recommendation for a babysitter, a plumber, [or] an electrician?

If you take Twitter, for instance, only 1 percent of members are contributing content and 99 percent are just following people and consuming content. [Nextdoor] is a platform that has a high percentage of people contributing.

Do you believe we're veering away from large social networks? Will niche networks like Nextdoor win out?

I don't think it's either-or. I think it's a question of both. The power of Facebook, LinkedIn, and Twitter is undeniable. And I don't think that is going to wane in the coming years ahead. We're trying to take some of the best practices that those companies have pioneered and apply it to what we think is one of the most important communities in people's lives.

How has the technology field changed since you first began working in it during the 1990s?

I think that there has been a trend over the course of the last 20 years that has made technology a lot more accessible to a wider range of people, including women. And one of the trends that has been going on more recently is women feeling comfortable starting their own companies. I'm hopeful there's going to be a lot more of that in the future as a reflection of [technology] being more accessible to people, as well as an audience that is increasingly more balanced. 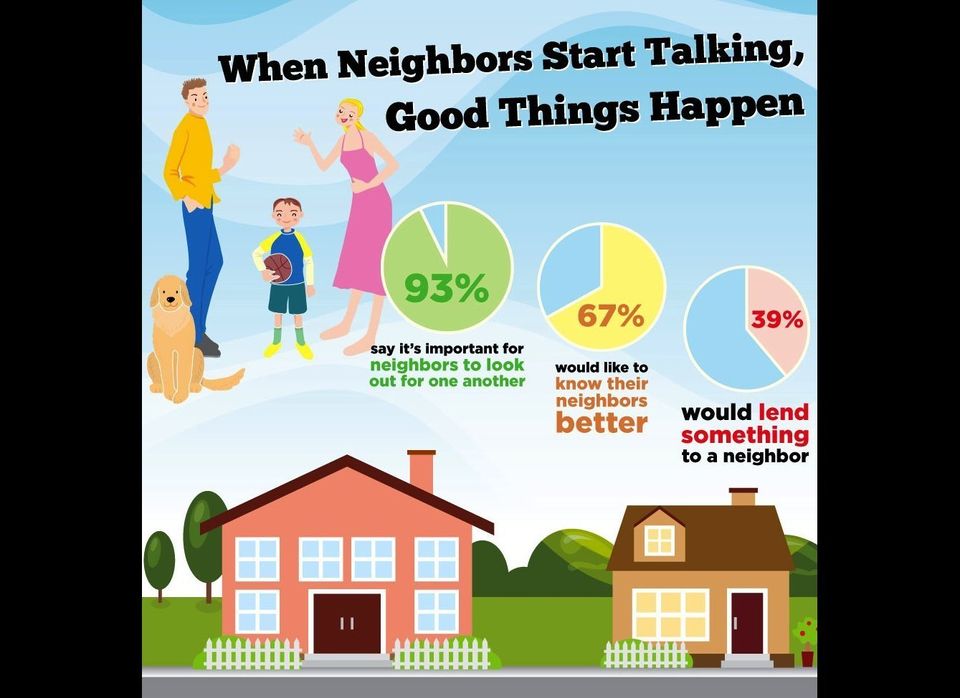 1 / 8
What People Think About Their Neighbors
Provided by <a href="https://nextdoor.com/" target="_hplink">Nextdoor</a>