Finding treasure feels great, and such is the case with musician Sarah McQuaid. The soulful singer, smart and sensuous songwriter, and scintillating guitarist has been hidden in plain sight with three gorgeous solo albums, and her fourth -- the recently-released, critically-acclaimed Walking Into White -- reveals a truly magnificent artist primed to enchant the masses. Sarah's current U.S. tour continues through October before she carries on in the U.K., and listen: I've attended hundreds of concerts of all kinds, and her subtle mastery onstage launches her straight into my fave shows ever. One voice, one guitar, and the wondrous reminder of the magic of music. Sarah has the gift. 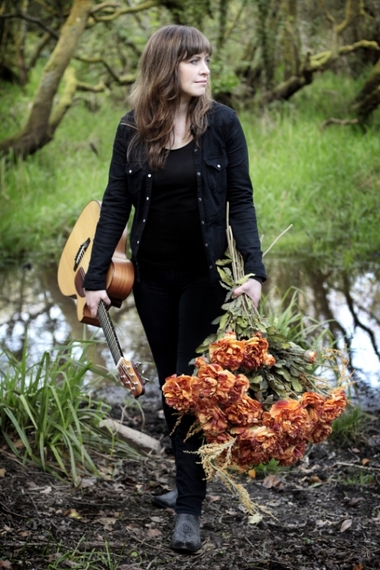 While Mrs. McQuaid and her Jedi-esque manager-engineer Martin Stansbury log thousands of highway miles, it's my pleasure to join them for terrific Thai cuisine and discuss the storied life and career of this focused yet easygoing chanteuse. We promptly explore Walking Into White:

"It was new territory for me in a number of ways," reveals Sarah. "I was working with my cousin, Adam Pierce, as producer, whereas the previous three albums were all recorded in Ireland with Gerry O'Beirne producing, and this one was recorded in Cornwall, New York, with Adam producing. Another change is that the previous albums were all made over fairly sizable periods of time -- where I would kind of go in, and do a recording session, and then come back out, and then go back in and record some more." 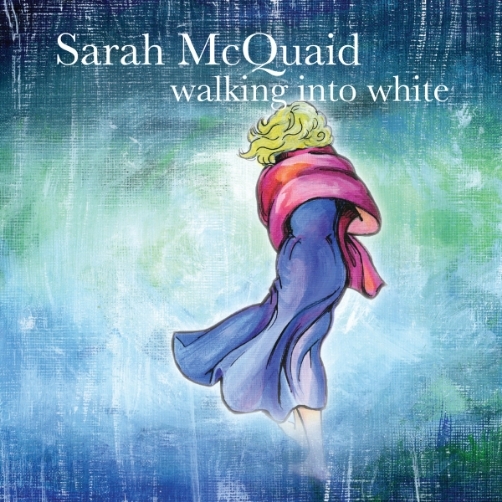 "With Walking Into White," the artist continues, "I already was in a really hectic tour schedule when the album was being planned, and over the few years in between The Plum Tree and the Rose and Walking Into White, I was constantly jotting down song ideas -- both using audio memos on my phone, jotting down little melodic ideas, and chord progressions and so on -- and also writing down bits of lyrics. Because the tour schedule was so hectic, I hadn't finished a single song by the time we booked the studio time. We really just had 15 days in three weeks to do the whole thing: to record and mix the album. That actually turned out to be a really good way of working, and I'm going to do that again.

"Because the songs were all written in one intensive session, I think they fit together really well, and I think also I was conscious of making them all quite different from each other, in terms of: rhythmically, and what keys they're in, and what I was doing with the guitar, and what the general feel of the song was. I was thinking, 'I'm putting a suite of music together, and I want to make sure there's plenty of variety and contrast.' And also they all came out of the same kind of creative space, in a way, if that's not too airy-fairy a way to talk."

For new songs "Where the Wind Decides to Blow," "The Tide," and the title track, Sarah illuminates in her new album a literary inspiration perhaps unfamiliar to American audiences.

"It reflects a moment in time, and what themes are running through my head, and I guess one big theme would be the natural world and how we interact with it: partly because I was reading this series of books to my kids -- Swallows and Amazons, which are all written by Arthur Ransome -- and thinking about how a lot of situations in the books were kind of wonderful kind of metaphors for life, you know -- and metaphors drawn from the natural world."

Born in Spain, Sarah grew up in Chicago and Washington, D.C., before carrying on through disparate locales such as France, Pennsylvania, and Ireland -- eventually settling in England's west country. Since she impressively cites the decidedly-not-Disneyfied Wind and the Willows chapter, "The Piper at the Gates of Dawn" as an inspiration for "Pipe and Tabor" (from her album Crow Coyote Buffalo, with singer Zoë Pollock, together as duo Mama), I ask if she also grew up with the Swallows and Amazons series.

"My husband had read them as a kid," she clarifies. "They were written back in the '20s and '30s, and they'd been read to my husband by his mum, and at some stage, when the kids were young, my in-laws, his parents, gave us a box set of all 13 books. He was like, 'Oh, these are great!' And I had never come across them, because I don't think they really made it over to this country. They're very English books -- and they're of their time. There are a few politically incorrect moments in them -- which I kind of fudged over when reading them aloud to my kids. (laughs) With asides of, 'Now, this is the way people used to talk in those days.' (laughs) 'We don't do this anymore.'" 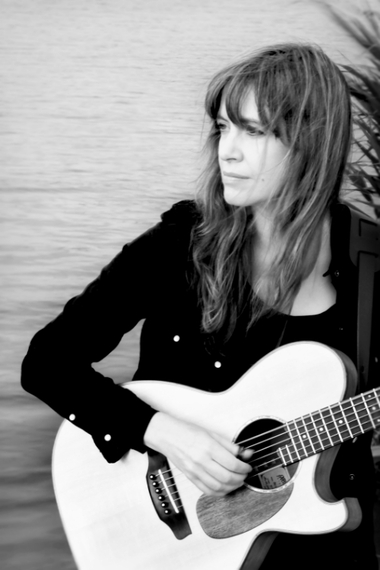 "And songs that aren't drawn from the Swallows and Amazons series," Sarah elaborates, "like 'Yellowstone' was inspired by a thing my son wrote on a piece of paper. Basically he was lying awake at night and worrying about things, so I said to him -- because this had worked for me -- I said, 'Why don't you try writing down your worries on different pieces of paper, and once they're written down, they're on the paper, and they don't have to be in your head anymore.' He did that, and that worked for him, but of course I being his mother had to go and look through the bits of paper where he'd written down the things that he was worried about. And one of the things that he was worried about was this underground volcano underneath Yellowstone, and the danger that it would erupt and somehow set off a chain reaction of volcanoes."

Sarah notes that at the show I attended, a geologist approached and explained to her that her son's elaborate chain-reaction concerns were unfounded. But still that volcano is potentially problematic. I ask how her son found out about it.

"Well, he's an inveterate reader of Wikipedia," she laughs. "So, we don't have TV at all, but we do have computers, and he's a mine of information which he gets off Wikipedia. He comes up with the maddest things like: gummy bears came up in conversation one time. I don't know -- somebody mentioned gummy bears. Were you talking about Haribo, Martin?"

"I think we were talking about Haribo," responds the stalwart Martin. "We'd been in Germany."

"Somebody was talking about gummy bears, and my son said: 'Gummy bears were invented by so-and-so in such a year, by somebody in Germany in 1926' or whatever -- and I was like, 'Really?! Let's see if he's right!' and I got out my phone, and looked it up, and he was right."

I let slip a flash of sincere wonder.

"He just has the most amazing ability to retain information," adds Sarah. 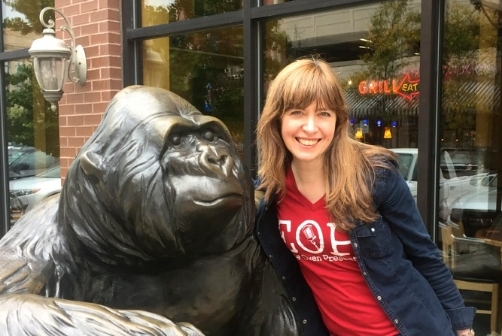 Between tour dates in Toledo and Chicago,
Sarah makes a new friend in South Bend, Indiana
photo by Martin Stansbury

One of the standout songs on Walking Into White is "Jackdaws Rising," which makes for brilliant and unusual performance material, with Sarah delivering its polyrhythms via stomps and handclaps, plus a round of three simultaneous verses, all looped live by maestro Martin. I ask if she's dealing in metaphor, but not particularly: these jackdaws really swoop where she lives, and this is a word painting.

"I'm just describing what I see. I guess the kind of metaphorical bit, where I get kind of dreamy about it, is I'm thinking about the whole thing of twilight, and the whole thing about the crossing of worlds, and that this is the time when there's a window through to the spirit world, and it's supposed to be the time when all the ghosts are about, as well. It feels kind of spooky, because -- you can imagine, this cloud of black birds suddenly all flying up at once into the sky, and making huge amounts of noise, and then they [whooshing sound effect] back into the tree again. It's an amazing time."

("Damn, you're cool," silently reflects the journalist. "Why aren't more people cool like you?")

In closing, I ask the inspiration for the album's lovely opener, "Low Winter Sun."

"'Low Winter Sun' -- that also is kind of a word picture of a very specific time and place. It's driving up the hill from my house up to the nearest village -- especially in winter, when the sun is low. As you're driving up the hill, the sun just hits you straight on in the face, and blinds you, and you can't see anything. And there's these wonderful kind of stunted hawthorn trees, and the wind has shaped them, so they're kind of curved over. And when it's winter, and the branches are really clearly outlined, and the sun is hitting you in the face, you see this branch shape against the light, and it's just really stark and very intense.

"It's funny," smiles Sarah, patient as her Pad Thai cools, "because I try to write songs that are universal in the sense that anybody can listen to them, and feel like it's about their life in some way, but with imagery, I tend to pick on a particular, very specific piece of imagery. But hopefully my emotional reaction to that very specific image is similar to the emotional reaction another person would have to the same image. So if I describe the image, then maybe the emotion can be universal.

"If that makes any sense!" 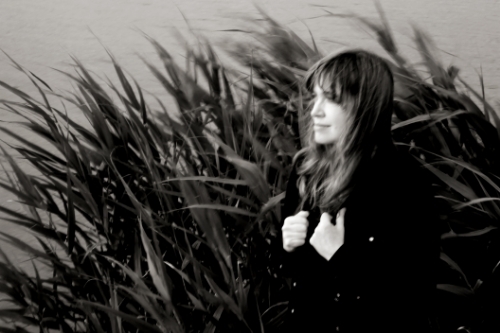 Yes, Sarah McQuaid is a major discovery, her devotion to songcraft impressive, her nuanced delivery grounded yet heavenly. As music magazine The Living Tradition aptly put it, Sarah is world class. And she's presently touring. Seeking treasure? Here you go.