Anyone who has watched Sarah Palin closely in recent months can only marvel at the "magical thinking" she embraces with respect to the potential outcome of the Republican Party primary for president. It's clear that Palin still has her sights set on the White House for 2012.

In an interview with Sean Hannity in February, she declared:

In her widely reported interview with CNN on Super Tuesday, she openly stated that she would consider accepting the nomination at a brokered GOP convention:

Anything is possible. I don't close any doors that perhaps would be open out there, so, no, I wouldn't close that door. My plan is to be at that convention.

It's a line she has uttered repeatedly ever since her ill-fated candidacy as John McCain's running mate in 2008. To most casual observers of the American political process, even Republicans, this would seem to border on the delusional. Her favorability rating among the general populace is now staggeringly low. In many circles, she is a laughingstock or a punch line. She didn't even bother to enter the primaries. Even Ann Coulter has now turned against her. 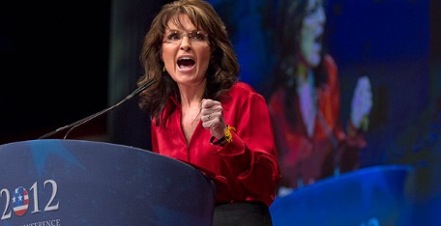 But a close look at Palin's recent activities and statements -- and, most significantly, the writings of her acolytes -- reveals that she is still plotting to take the White House in 2012. Take a look at the video she released last month on her website entitled "Chords of Memory," which links Palin's image with those of Lincoln and Reagan.

Palin has been consistent about four things since she announced her decision not to enter the Republican primaries last October:

1) She has strongly and vociferously attacked GOP frontrunner Mitt Romney;

2) She has embraced the idea of an endless primary season and has encouraged all four of the remaining candidates to stay in the race -- her sole purpose being the outcome of a brokered GOP convention in Tampa;

3) She has continued with her obsessive assault on Barack Obama, positioning herself as the "anti-Obama" among the conservative Republican base;

4) And, as noted above, she has made it clear now on several occasions that she is "open" to accepting the GOP nomination in Tampa.

At least one source close to the Palin family in Wasilla, Alaska, has confirmed that Palin "still believes it is God's will" that she serve as president, if not in 2012 then perhaps in 2016. Every move she has made in recent months -- every attack on Romney and Obama, every push for an elongated primary, every speculation about an open convention -- has been issued with this political calculation in mind.

In the aftermath of the devastating portrayal of Palin in HBO's Game Change, Palin's once-close political associate in Alaska, the good-government activist Andree McLeod, told me yesterday:

People can laugh all they want, but she ain't done. She's only developed a tougher skin through all 'this' and, out of desperation, has to inflict more damage for reasons only Sarah and her constantly-changing set of patrons knows. She has become even more dangerous and desperate.

Skeptics may argue that all of this is really Palin's feeble attempt to keep the spotlight on her and to boost her brand as a talking head on Fox News and as a highly paid celebrity speaker. Perhaps. But the lengthy interview she gave CNN on Election Day was no accident and her follow-up interviews since then on Fox News were certainly calculated as well. There's now even a Facebook page entitled "Palin -- Our Brokered Convention Selection."

Conservatives4Palin was co-founded by Rebecca Mansour, the controversial Palin sycophant who remains on Palin's SarahPAC payroll (as Aries Petra Consulting) but has apparently been sent to the Palin penalty box for comments she made last spring mocking Bristol Palin. The site, however, remains the primary Internet locale where Palin's acolytes openly push Palin's personal and political agenda. It is the site where Palin's Republican "enemies" -- everyone from Karl Rove to Romney and, now, even the likes of Coulter and Bill O'Reilly -- are repeatedly trashed or derided. Most importantly, C4P continues to represent an accurate reflection of the Palin political outlook in advance of the 2012 elections.

When Palin, for instance, went on Fox with Greta Van Susteren, and declared, "We need to replace Barack Obama with someone who understands... energy security," the minions at Conservatives4Palin made sure that everyone understood that the candidate Palin was actually referencing was -- ta da! -- none other than Sarah Palin.

But the most openly articulated playbook for Palin's presidential aspirations was submitted in late February by C4P contributor Nancy Labonete, entitled "In the Event of a Brokered Convention, All Bets are Off." It provides a fascinating glimpse into the Palin mindset and connects all the dots in Palin's seemingly zig-zag political strategy in advance of the 2012 election.

It begins with a hyperbolic argument that Palin is the only Republican capable of beating Obama:

If Sarah Palin's most electrifying speech at the CPAC did not convince that only she can articulate Americans' concerns and vision for our nation, then Obama has just been handed his second term. The CPAC event proved that only she can rouse the unexcited base to their feet. Only she can energize and move voters to go out to the polls. Only she can unite us to defeat Barack Obama.

Labonete's polemic continues by arguing that Palin is the only candidate who can withstand the "Alinksy attacks" during the election; Palin, she argues, is the lone Republican who has "the smarts to throw the media into a convulsive tizzy and still have her message ring out loudly and win the argument." Palin is the only candidate with "the fortitude and fire in the belly to defeat Obama." Only, only, only.

What's fascinating about the Labonete posting is that it does not focus merely on the hypothetical; it urges Palin supporters to become delegates to the GOP convention in Tampa and provides a link for doing so. "Even if Governor Palin is not a candidate (yet)," Labonete argues, "let your county GOP official know that you will vote for the best candidate at that time, but in the event of a brokered convention, you will be voting for Sarah Palin."

Labonete concludes, "We must coalesce around a patriot whose message is ingrained in her conservative character."

This is precisely the type of right-wing groundswell and organizing that Palin is fostering with her recent rhetoric about "open doors" at Tampa. "Lots of prayers can make this happen," replied one commentator on the C4P blogsite. "God is listening. Let's make sure He hears us."

In recent weeks, Palin has used the unflattering portrait of her in HBO's Game Change as a way to advance herself as a victim of the "liberal media" -- (C4P posted no fewer than 40 attacks on the film.) While Game Change has likely hurt her favorability with the general populace, it has raised the ante with her conservative Republican base, who now command a significant majority in the Republican party. Palin remains the base's superstar and is the only Republican -- Romney included -- who claims a rock-star status on the hustings.

Palin never could have survived the scrutiny of a prolonged primary season and the reality-television string of debates it encumbered. In a recent appearance on "Morning Joe," former McCain senior strategist Steve Schmidt was asked by Andrea Mitchell if he thought Palin had a "future" as "a national leader" in the Republican Party.

I hope not. And the reason I say that is because if you look at, over the last four years, all of the deficiencies in knowledge, all the deficiencies in preparedness, she's done not one thing to rectify them, to correct them. She has become a person who I think is filled with grievance, filled with anger who has a divisive message for the national stage when we need leaders in both parties to have a unifying message. . . . The lack of preparedness was a bad thing and the total disinterest in being more prepared and rectifying that is something that disqualifies.

But in the bubble of the Republican Convention, those deficiencies would never even come close to the surface. Even without the Palinista's organizing efforts, GOP delegates are most heavily weighted toward the conservative base -- and Palin remains their darling. She might very well capture the emotional narrative of the convention like Romney and Santorum could only imagine.

Moreover, the Republican establishment has lost control of both the party and the process in Tampa. Establishment leaders were not able to solidify Romney's nomination during the so-called "silent primary" in the year leading up to the Iowa caucuses; the establishment will have little control over the majority of delegates in Tampa. Palin remains a formidable force with the party base. On the campaign trail, Palin would draw crowds the likes of which have never been seen before by a Republican Party candidate for president.

As the film Game Change revealed to a broad American audience, Sarah Palin is many things: vain, anger-driven, intellectually lazy, polarizing and dysfunctional. But as I also discovered in researching my book The Lies of Sarah Palin: The Untold Story Behind Her Relentless Quest for Power, she is equally ambitious, calculating, and sly as a fox. She has no intention of going gently into that political goodnight.

Pay close attention: Palin's rhetoric between now and Tampa will continue to be critical of both Romney and Obama; it will continue to push for a contested primary; and it will continue to signal Palin's willingness to accept the nomination of a brokered convention. Palin knows that Romney will never pack her star power with the base -- and that neither Rick Santorum nor Newt Gingrich will either.

In the aftermath of Santorum's sweep of Alabama and Mississippi on Tuesday, a brokered GOP convention is a very real possibility. The Republican Party has become a fractured mosaic of fringe constituencies -- from Tea Partiers to evangelical anti-abortion activists, from libertarians who support Ron Paul to white supremacists who despise the fact that there is a black man in the White House. It is an unruly lot. The days of a GOP elite framing the presidential selection process are over. Charisma trumps experience; celebrity trumps substance; and, perhaps most disturbingly, anger trumps reason. Mama grizzlies, especially those who have been wounded, don't go down easy.

Award-winning writer and filmmaker Geoffrey Dunn's best-selling The Lies of Sarah Palin: The Untold Story Behind Her Relentless Quest for Power was published by Macmllan/St. Martin's in May of 2011 and will be published in paperback this May.