On her Facebook page this week, Sarah Palin outlined a pretty solid case for tough government regulations against corporations. (By the way, none of the sentences ended with the word "also," nor did the entry read like a really bad local newspaper letter to the editor, so I assume it was ghost-written.)

Yes, seriously. Sarah Palin is in favor of the federal government planting its gigantic boot on the throats of energy companies. She put it in writing. Not only that but she even proposed that our socialist, anti-capitalist, wealth-redistributing president call her on the phone so she can describe to him specifically how to impose all kinds of big government regulations against BP and others.

It's about damn time.

I knew if we just continued to make the case for serious government regulation of corporations, we'd finally win some minds and hearts -- even minds as airy, and wolf-snipering hearts as hardened as Sarah Palin's.

Here's the centerpiece of what she wrote:

Unless government appropriately regulates oil developments and holds oil executives accountable, the public will not trust them to drill, baby, drill. And we must!

I can only assume she was suggesting that "we must!" regulate and drill. For the record, we're already drilling offshore, so enough of this hackish "drill, baby, drill" screeching. There are already 3,858 oil and gas platforms operating in the Gulf of Mexico alone, according to NOAA. Here's a convenient map with yellow dots indicating all of the locations where we're already, you know, drilling, baby, drilling: 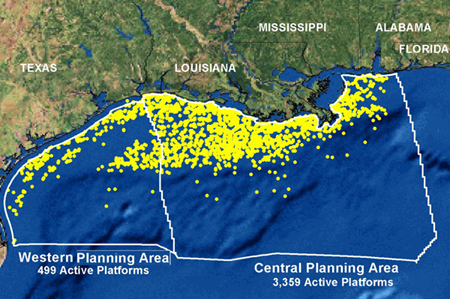 I understand, however, that most Republicans aren't satisfied and want more drilling. They want the moratorium on new deepwater drilling permits to end, and they want new exploration for oil in heretofore untapped leases all along the entire coast of the United States. The problem is that it would take around 10 years to get platforms online and producing in the areas where there are untapped leases, and the deepwater platforms that are ready to drill now don't have the failsafe mechanisms -- and the regulations Sarah wants -- in place yet. So how about this compromise: we continue to drill with the existing offshore wells, but, as Sarah Palin suggests, we regulate the hell out of them? Once those regulations are in place, maybe we can talk about new offshore leases rather than drilling willy-nilly.

Bobby Jindal, when he's not hyperventilating into a bag or begging for taxpayer wealth to be redistributed from elsewhere to Louisiana, is demanding that new deepwater oil platforms be allowed to immediately begin pumping before new regulations are put in place.

Haley Barbour, the real life Boss Hogg and one of the only Republicans who successfully makes Sarah Palin look like a genius, said the other day that the oil is just like "food mousse" and that it's non-toxic. Food mousse! Governor Barbour should probably call Sarah Palin so she can explain how the president desperately needs to take over the clean-up of all that mousse. Then again, Sarah would probably advise that Barbour shoot the "moose." Confusion over the difference between "mousse" and "moose" ensues.

Just about every Gulf coast politician, including Barbour, Jindal and both Republicans and Democrats alike, is desperate for the president to lift his moratorium on new deepwater drilling permits.

Their favorite line: we didn't stop running the space shuttle missions after the Challenger disaster, so why should we stop drilling in deep water? Well, in reality, we stopped running space shuttle missions for 32 months following the explosion. And the Challenger explosion didn't poison thousands of square miles of natural resources while potentially killing the entire coastal fishing industry from Louisiana to the Florida panhandle -- and potentially beyond.

Hell, Rep. Don Young, a Republican from Sarah Palin's home state of Alaska doesn't even think the largest environmental disaster in American history is a disaster at all.

"This is not an environmental disaster," Rep. Young said, "and I will say that again and again because it is a natural phenomenon." Call Sarah, Rep. Young. She'll explain it.

Can we also infer that Sarah Palin supports the Canadian regulation mandating a relief well for every offshore oil platform? If BP and Transocean had drilled a $100 million relief well to accompany the Deepwater Horizon platform, the bulk of the gusher would've been mitigated before it really began.

Will you, Sarah Palin, endorse a new federal regulation mandating relief wells for every offshore oil well? And if not, why not? You're demanding all kinds of new regulations, why not this one? Additionally, will you condemn BP for lobbying the Canadian government to repeal its relief well mandate?

Meanwhile, Sarah Palin's Republican friends in Congress spent much of the last 40 days filibustering a law that would lift the liability cap on oil companies. Does she support Senator Inhofe and others who blocked this legislation while tens of thousands of barrels of oil spewed from BP's blowout preventer and riser?

Sarah wrote that she supports "playing hardball with Big Oil" and praised her former "administration's efforts in holding Big Oil accountable to operate ethically and responsibly." So let's hear it then. I want to know specifically what Sarah Palin supports in terms of new regulations.

Mr. President: with all due respect, you have to get involved, sir. The priorities and timeline of an oil company are not the same as the public's. You cannot outsource the cleanup and the responsibility and the trust to BP and expect that the legitimate interests of Americans adversely affected by this spill will somehow be met.

In this paragraph, she makes it abundantly clear that she supports government intervention in the free market. Specifically, she endorsed the idea of the president taking over the entire operation. In order to achieve this, the president would either have to nationalize BP or instruct the government to put BP into temporary receivership. A government takeover. But when the rest of us were enumerating the tens of thousands of annual deaths due to a lack of health insurance, Sarah Palin was one of the most vocal opponents of the president "taking over" the health care industry (in reality, he really wasn't proposing any such thing). When General Motors and Chrysler were falling apart, she opposed the president "taking over" those companies (he really didn't, and both companies have paid back their loans).

In this crisis, she literally wants the president to "call her" so she can explain to him exactly how he ought to be taking over the situation and, concurrently, implementing new "hardball" regulations. She also is suggesting "holding executives accountable" for their mistakes. Does she feel the same about WellPoint? Or Goldman-Sachs? How about Monsanto? Or Halliburton? Halliburton was the corporation that botched the cement job on the well. Actually, this isn't the first time Halliburton has screwed up the Deepwater Horizon rig. In November of 2005...

...the Deepwater Horizon was positioned above another well in the Gulf, faulty cement work allowed wall-supporting steel casing to come apart. Almost 15,000 gallons of drilling fluid spilled into the Gulf.

Maybe Liz Cheney should "call" Sarah. This way, Sarah can explain how Halliburton executives should be "held accountable" and why new government regulations ought to be imposed -- say nothing of perhaps the president taking over its operations, rather than "outsourcing" it. While they're both on the phone, Sarah can explain to Liz Cheney how Halliburton has repeatedly defrauded the American taxpayer and jeopardized American soldiers.

Because I don't believe Sarah Palin is really in favor of any of this. Sarah Palin only really supports the opposite of whatever she perceives to be the position of the president. This is the basis for the entire modern post-Bush Republican-slash-tea party movement. Do the opposite. Push for the opposite. There's no concern for consistency or hypocrisy. The platform is very simply: we believe the opposite of anything the president, the Democrats and the progressives say, regardless of whether it's contradictory, crazy or stupid.

Hopefully I'm wrong, and Sarah Palin will begin to use her reality-show celebrity to help us roll back this 40 year deregulatory trend in government by stripping corporations of the carte blanche they've enjoyed for too long.

If you're really interested in helping, Sarah, call me.