Is Sarah Palin the front-runner for the 2012 GOP nomination? That's the claim that's been made by some prominent commentators (here, here and here), but it's wildly premature. There's a reason that the Intrade futures market currently puts the odds of Palin winning the nomination at 18% (behind Mitt Romney and John Thune) -- in particular, her terrible poll numbers.

It's worth underscoring just how bad Palin's numbers are. The closest comparison to her is probably Hillary Clinton, another female politician with high unfavorables entering an anticipated presidential campaign. But even Clinton had much better numbers than Palin at this point in 2006: 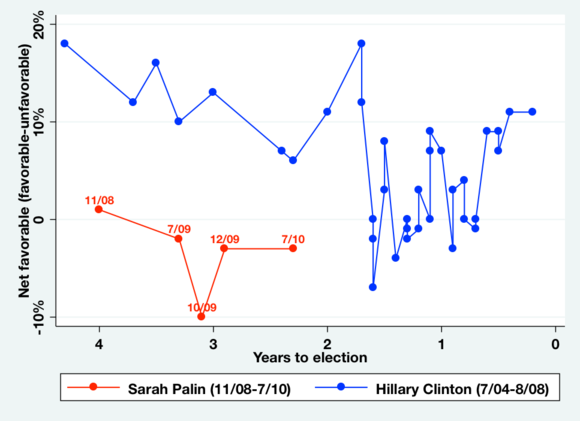 Also, though Palin's ability to raise money and turn out crowds has made her a star within the party, it's unlikely that she will enjoy anything near the level of elite support that helped get Clinton so close to the Democratic nomination.

I've looked back through polls on possible presidential candidates at this stage in the election cycle, and it's difficult to locate an appropriate comparison for Palin. Besides Clinton, the best comparison might be to Dan Quayle, a former vice president with extremely high unfavorables who was widely perceived as not ready to be president. As a result (presumably), Quayle ultimately decided not to run in 1996 and 2000 dropped out of the field before Iowa in 2000. Similarly, though he was perceived as competent, high unfavorables may have helped dissuade Al Gore from running again in 2004 and 2008. Here's how Quayle, Gore, Clinton and Palin's favorable/unfavorable numbers compare from the Gallup poll question closest to this point in the current electoral cycle: 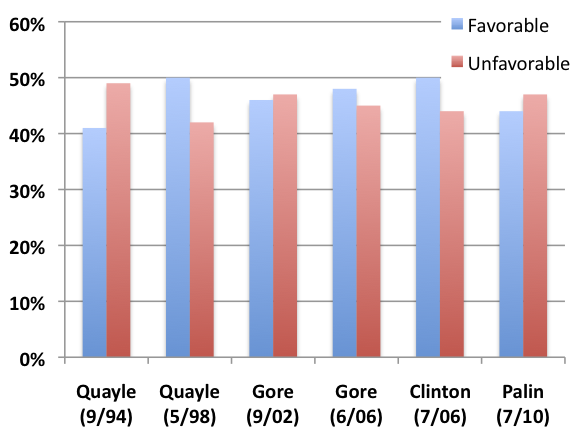 Obviously, neither Quayle nor Gore inspired the sort of adulation that Palin does today, but there's a reason that they didn't run. Given that Palin can make millions if she stays out of electoral politics, I'd put the odds of her running at less than the current Intrade estimate of 69%.