Now that Hillary Clinton's initial press conference on her email troubles is a week behind us -- and, trust me, this matter is going to malinger through several more weeks and months of news cycles -- it's time to take a closer look at Sarah Palin's deceitful and self-serving response to the Clinton email controversy.

Let me make one thing clear up front: I offer no excuses and provide no quarter for the manner in which Clinton handled her email communications during her tenure as Secretary of State. I found her explanation, such as it was, hardly sufficient for someone serving in her diplomatic capacity and with an eye on the presidency.

But the way in which former Alaska governor Sarah Palin forced her presence into the national conversation around this issue (Google News listed more than 5,000 articles on the subject) underscores the utter fraud of Palin's continued role in varied national political debates -- and the troubling way in which the mainstream media continue to sustain her seemingly never-ending con job of selling political snake oil to the American people.

In widely reported Twitter and Facebook postings, Palin's bread-and-butter method for advancing the complex nuances of American democracy, Palin characterized the Clinton "email scandal" as "shady and corrupt." She followed those up with an oft-cited "opinion piece" on the Fox News website, in which Palin did what she does best -- she went into martyr mode and played the pity card. And, of course, she lied.

"I know something about how annoying FOIA requests can be for public officials," she wrote. "After I returned home from the 2008 vice presidential campaign, the state of Alaska was flooded with innumerable FOIA [Freedom of Information Act] requests to see literally every single email I ever wrote while governor."

The only emails redacted were the very few that were protected by attorney/client privilege -- a determination agreed upon by my lawyers and the Attorney General's office who reviewed them... Because nothing was kept secret in any way. Everything was done in the most transparent way possible.

What a crock. An absolute crock. But not once in reporting on the Clinton-Palin dustup did the national media challenge Palin on these utterly duplicitous renditions of what happened during her tenure in Alaska. (Kendall Breitman's shamefully uncritical piece in Politico provides an excellent case in point). In fact, the process of obtaining access to Palin's emails lasted nearly a half-decade, and Palin's personal lawyers and her hand-picked attorney general did everything in their power to keep those emails from ever seeing the light of day. In the end, many Palin emails and passages from emails were redacted or withheld for reasons that had nothing to do with "attorney-client privilege" (she claimed "executive privilege," "deliberative process," "personal privilege," and "privacy," on almost all of them). Others were destroyed. It's all simply another Palin lie.

Palin skewers the truth from the get-go, namely by contending that the FOIA requests came after she "returned home from the 2008 vice presidential campaign" (which, of course, those with less-inflated egos refer to as a presidential campaign). Indeed, long before Palin became a national laughingstock, a pair of open-government advocates in Alaska, Andrée McLeod and Zane Henning, believed that Palin and various of her henchmen (most notably Frank Bailey and Ivy Frye) were engaged in bold-face political machinations while on the state payroll and began to demand access to government emails.

Roughly 1,100 emails from McLeod's and Henning's initial requests were withheld by Palin with a handful of bogus legal arguments that simply didn't pass the straight-face test. Once again, so much for Palin's commitment to transparency.

In August of 2008, several weeks before Palin was tagged by John McCain to ride shotgun with him on his ill-fated campaign, McLeod, based on findings in those emails, filed an ethics complaint against Palin, Bailey and others in the Palin administration for the inappropriate hiring of a Palin supporter for a classified state position. The complaint resulted in the official finding that Bailey get "training and counseling" on the Alaska Personnel Act to "prevent the potential for future violations of the act."

One of my favorite Palin administration email interactions that I discovered was sent out almost as soon as Palin assumed the governorship. In December of 2006 (the day after Palin had been sworn in), when Palin's Coordinator for Public Relations, Michelle Fabrello, responded to a request from the head of Palin's so-called Pipeline Team, Marty Rutherford, regarding a potential meeting to discuss interstate gas issues, Fabrello said that she didn't always check Palin's official email address "for hours." She noted that another Palin sycophant also on the government payroll, Kris Perry, "might have a better email for her." Wink, wink. Rutherford responded: "I have the governor's personal email, so I'll just use that for a while." The sham was on from the start.

Several key figures in the Palin administration played the secrecy game, and when the demands for transparency began, they circled the wagons. It's all part of what McLeod has dubbed "a culture of corruption" in the Last Frontier.

As I noted in my book, The Lies of Sarah Palin: The Untold Story Behind her Relentless Quest for Power (MacMillan/St.Martin's), as a result of McLeod's and Henning's initial email requests a discovery was made proving conclusively that Bailey had set up a private email system for a handful of the core Palin acolytes serving in Alaska state government (and which also included her husband, Todd).

In researching my book, I made several FOIA requests through various State of Alaska department heads and attorneys. Most were delayed beyond reason and almost all came back with significant redactions and omissions. Some emails that I requested (and which were denied even to exist) later appeared in other batches of released emails. Then I learned that several members of Palin's former staff, who were in email communication with her before her resignation, had been allowed to go through the emails and request redactions or exemptions from release.

The idea that there was "transparency" -- or a commitment to transparency -- in this process is a joke. The major batch of Palin emails -- 24,199 pages of, once again, heavily redacted materials -- was not released until June of 2011 -- nearly two years after Palin had resigned from her governorship in disgrace, and nearly three years after the first requests were made for those records. A final collection -- also heavily redacted -- was then released in February 2012, three-and-half years after the initial query. At one point the State of Alaska attempted to charge the Associated Press $15.4 million for fulfilling one of its requests. That hardly makes for a "transparent" process. Palin is a flat-out liar.

In October of 2012, McLeod and her attorney, Donald Craig Mitchell, finally won a drawn-out court battle in which the Alaska Supreme Court ruled that "Alaska state employees can't use private email accounts to hide their work communication from public record laws." By then it was too late -- the Palin administration's private email system had already been destroyed.

Bailey co-authored an ultimately misleading and problematic book on his tenure as Palin's "hatchet-man." But Bailey's book lays out how he very consciously constructed a highly secretive and private email system for conducting state business, about which independent investigator Timothy Petumenos made the following findings in November of 2008. I quote them at length because they further call lie to Palin's present claims:

A cautionary note must be made with respect to the investigation conducted. Efforts to locate and secure all relevant e-mails have been exceedingly difficult in this case...

In particular, the Governor and Frank Bailey conducted government business on private accounts...Both Governor Palin and Frank Bailey testified that they had been told there was not a document retention policy that applied to e-mails in the Governor's Office. Our investigation revealed that if they received this advice, it was mistaken. We found document retention schedules for the Governor's Office and for the Director of Boards and Commissions [Bailey] that were specific and readily available at the Office of State Archives.

... Independent Counsel contacted the Legal Department for Yahoo [which] stated that e-mails on Yahoo accounts are currently beyond retrieval between 24 and 48 hours after deletion, making a subpoena to Yahoo for deleted e-mails fruitless.

We also investigated a private e-mail network that was opened by Frank Bailey for the intended use of Governor Palin, Todd Palin, Frank Bailey, Ivey Fry and Kris Perry... According to the system administrator, who backed up all information that existed on the account as of September 17, any e-mails deleted longer than 14 days prior to account closure would not have been backed up and could not be retrieved as part of the backup process. [Emphases added.]

So much for Palin's accountability.

So why would she now call further attention to her lies and obfuscations of the truth nearly six years after she abandoned her governorship?

Because it pays for her to do so.

Less than two full election cycles after she appeared on the national ticket as John McCain's running mate, Palin has been relegated to the lunatic fringes of the Republican Party. In January, she told reporters that she is "seriously considering" a run in 2016, but to virtually all GOP insiders, she is a political pariah, to be avoided at all costs. Odds makers in Britain, who track American political races closely, have her at 50-to-1 and longer just to win the Republican nomination. 25 other candidates, including Donald Trump, are listed ahead of her. In terms of actually winning the presidency, one bookie has her at 250-to-1, not far ahead of (I kid you not) Charlie Sheen. But her base still believes in her.

So if anyone wants to know why Palin engages in this serial duplicity and demagoguery in her unyielding attacks on Barack Obama and Hilary Clinton, she provided the answer last week on the website of her rip-off political action committee, SarahPAC.

Here's the skinny: shortly after her Facebook and Twitter and Fox News posts, Palin sent a private notice to her SarahPAC email lists pimping for money: 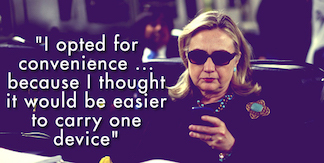 That opens a can of worms to another Palin scandal. SarahPAC has given out only paltry sums to Republican candidates (only 3 percent during the third term of the 2014 campaign cycle), while the lion's share goes to supporting her political gaggle of paid political consultants -- Timothy Crawford, Rebecca Mansour, Jason Recher, Andrew Davis, Doug McMarlin, Pamela Pryor, et al. -- and to pay for flights, hotel accommodations, limousine rentals, legal fees and retainers, buying her own books as "donor gifts" and, of course, more fundraising. And it apparently helps Palin to maintain her second home in Scottsdale, Arizona -- paying for more than two-dozen flights out of nearby Tempe in the last two-year reporting period.

Of this you can be sure -- whenever Palin reaches out to her minions, it's for one purpose and one purpose only -- promoting Sarah Palin. That's one thing about Palin that has always been predictable.