Sarah Palin recently made news by placing a map on her Facebook page of 20 House Democrats up for reelection across America that voted for health care reform. On its face it isn't noteworthy, but controversy grew over the fact each House Democrat is highlighted in gun crosshairs and she made statements such as "We'll aim for these races and many others," and "This is just the first salvo in a fight to elect people across the nation who will bring common sense to Washington." 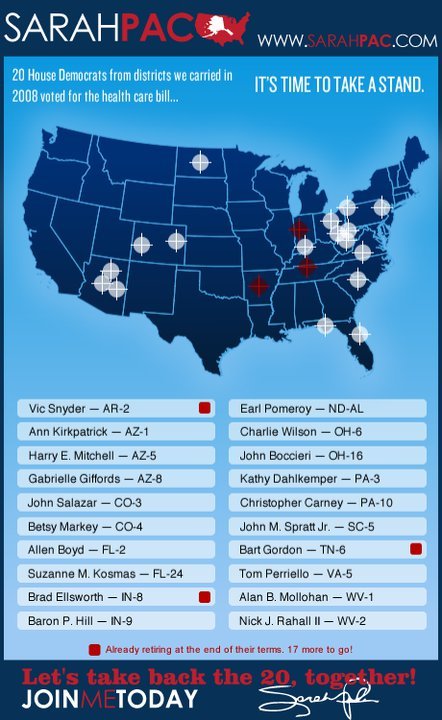 Democrats have argued that the crosshair images coupled with selective words such as "aim" and "salvo" conjure up aiming a gun, and is tantamount to encouraging violence against the Democrats she listed. Now, I'm no Republican, but this all appears to be quite a stretch. Do Democrats really believe Palin has put out a hit-list on House Democrats? In fairness to Palin, haven't we all put crosshairs on someone's face and used it as a dartboard? I do have ex-girlfriends, after all. So what's the big deal?

To find answers I decided to place a phone call to the brightest legal mind I know, an old buddy of mine from law school. Jennifer from South Carolina would have answers. Not only does she know the law, but South Carolina has guns.

"Context," she told me. "Most of the time threats are harmless, but the background of the one making threats is relevant. If I threaten you but have no violent background, it's less of an issue. But if someone threatens you who has been charged with a violent crime in the past, or has a medical ailment that can be associated with violence, it changes things a bit. The threat can become more serious."

I have to believe that if Sarah Palin had a violent streak we more than likely would have heard about it by now. I have the utmost faith John McCain did a thorough investigation before choosing the most appropriate and qualified vice presidential candidate for his run at the presidency. I mean, who would pick a nominee that wasn't qualified? You would probably lose an election if you did that.

So what's the big deal? Sarah Palin doesn't have a history of violence, I thought. And then I remembered "the picture." 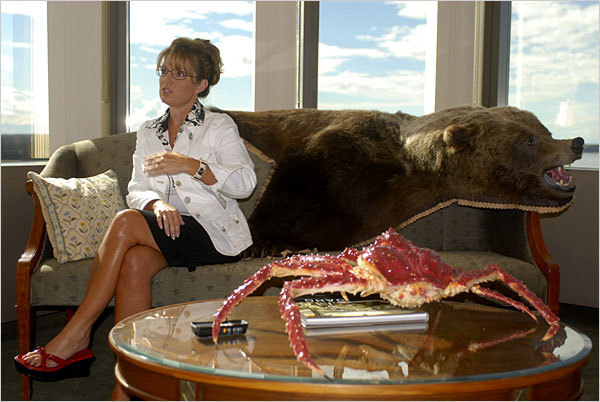 This picture graced the New York Times, and I remember being disturbed by it, mostly because I don't view dead carcasses as interior design. I also remember thinking it was a good thing Palin had her crabs under control. But recalling this picture horrified me, as violence against animals is usually a warning sign before a person begins to commit violence against human beings. I relayed my worries to Jennifer back in South Carolina.

"Is it illegal to hunt people?" I asked. I waited for a response but only received dial tone from the other end. I could only assume one thing: Jennifer was as worried as I was and hung up in fear. I began to panic. Sarah Palin wasn't bluffing -- she was going to hunt down each and every one of the House Democrats who supported health care reform. It made perfect sense -- the House Democrats supported life through their health care vote and Palin loves death (unless it involves babies).

I began to dial 911 when a thought struck me: Democrats shouldn't be afraid of Sarah Palin. She may be a hunter but there's one thing she does better than anyone: quitting. All the pieces started to come together. Sarah Palin released a map of where the House Democrats are located so that she wouldn't have to do it. The only loose leg on my theory was why she'd delegate killing House Democrats. What could she possible have to do that was more important than participating in American government, her chosen career path?

Scott Janssen is a graduate student, blogger, and all-around drain on society.