Maricopa County Sheriff Joe Arpaio took to Twitter last Friday to tell his followers about a seemingly unusual welcome gift he gave to Sarah Palin upon her arrival to the Arizona State Capitol.

"I just got done welcoming Sarah Palin to our County," wrote the hard-lined law enforcement official. "Had a nice chat and gave her a pair of pink underwear."

As it relates to the reputation Arpaio has developed for relentlessly crusading against illegal immigration, CNN lends context to the story:

The popular lawman has built a reputation for taking a strong-handed approach to those who break the law in his county. Whether it's a DUI, a violent crime or being an undocumented immigrant: commit a crime and get caught in Maricopa and you may find yourself wearing pink underwear and a black-and-white striped jail uniform while a part of a chain gang cleaning up county streets and sleeping in a hot, sweltering tent.

Palin made the visit to the Grand Canyon State to deliver the keynote address at Tea Party rally. Along with the "pink underwear" tweet, Arpaio sent out a picture of himself alongside the former Alaska Governor. 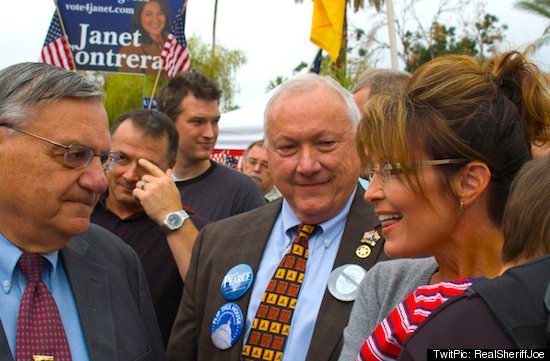 While the pair appear to be on good terms, Palin may have to keep an eye on the Arizona sheriff as it relates to her rumored presidential ambitions for 2012. Arpaio himself said last month that he wouldn't rule out a White House run.