In passages leaked from her forthcoming book America by Heart, Sarah Palin -- the erstwhile quitter governor of Alaska, who now, by all indications, fancies herself as President of the United States -- has taken another cheap shot at First Lady Michelle Obama.

In a passage on perceptions of racial inequality in the United States, Palin slams President Barack Obama, who, she asserts, "seems to believe" that "America -- at least America as it currently exists -- is a fundamentally unjust and unequal country." 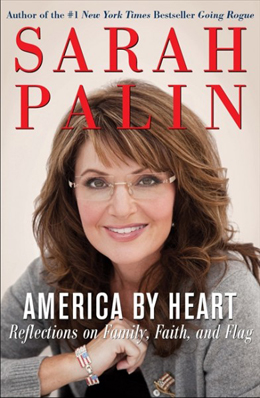 And then she goes after Michelle Obama:

Certainly his wife expressed this view when she said during the 2008 campaign that she had never felt proud of her country until her husband started winning elections. In retrospect, I guess this shouldn't surprise us, since both of them spent almost two decades in the pews of the Reverend Jeremiah Wright's church listening to his rants against America and white people.

The passage -- coming on page 26 in a chapter entitled "We, the People" -- echoes remarks made by Palin on the eve of the midterm elections, at a rally in San Jose, California, at which point she mocked remarks made by Michelle Obama during the 2008 campaign: "You know, when I hear people say, or had said during the campaign that they've never been proud of America," Palin spat out. "Haven't they met anybody in uniform yet? I get tears in my eyes when I see that young man, that young woman, walking through the airport in uniform...you too... so proud to be American."

In fact, Michelle Obama's remarks were made (in Madison, Wisconsin, during the 2008 campaign) in a context of Americans being "unified around some basic common issues":

What we have learned over this year is that hope is making a comeback. It is making a comeback. And let me tell you something--for the first time in my adult lifetime, I am really proud of my country. And not just because Barack has done well, but because I think people are hungry for change. And I have been desperate to see our country moving in that direction, and just not feeling so alone in my frustration and disappointment. I've seen people who are hungry to be unified around some basic common issues, and it's made me proud.

Afterwards, the First Lady further clarified her remarks by noting that she was referencing the "record number" of young voters participating in the political process in the 2008 campaign:

For the first time in my lifetime, I am seeing people rolling up their sleeves in way that I haven't seen and really trying to figure this out, and that's the source of pride I was talking about.

The passages from Palin's latest book first appeared at Palingates, where several other pages from American by Heart have also been posted. Palin followed up her comments about Michelle Obama by throwing an elbow at U.S. Attorney General Eric Holder, also focusing on racial overtones:

It also makes sense, then, that the man President Obama made his attorney general, Eric Holder, would call us a "nation of cowards" for failing to come to grips with what he described as the persistence of racism.

Award-winning writer and filmmaker Geoffrey Dunn's book The Lies of Sarah Palin: The Untold Story Behind Her Relentless Quest for Power will be published by St. Martin's Press in April of 2011. Thanks to Patrick at Palingates for the screen shot.