Sarah Palin took to Facebook Monday night to declare the Newsweek cover depicting her in runner's shorts as "sexist."

In a Facebook note to her almost 1 million fans, Palin said that Newsweek's choice of photo — which she shot for Runner's World magazine — was "unfortunate." Her full comments:

The choice of photo for the cover of this week's Newsweek is unfortunate. When it comes to Sarah Palin, this "news" magazine has relished focusing on the irrelevant rather than the relevant. The Runner's World magazine one-page profile for which this photo was taken was all about health and fitness - a subject to which I am devoted and which is critically important to this nation. The out-of-context Newsweek approach is sexist and oh-so-expected by now. If anyone can learn anything from it: it shows why you shouldn't judge a book by its cover, gender, or color of skin. The media will do anything to draw attention - even if out of context.

The full cover appears below: 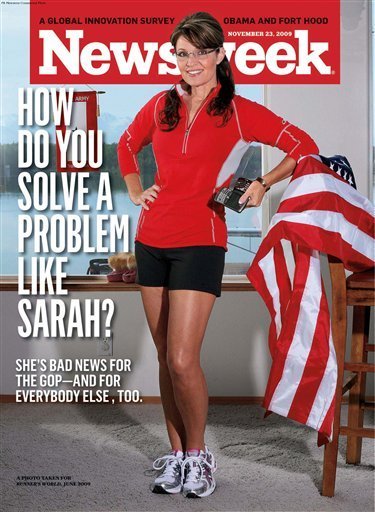