WASHINGTON -- As Sarah Palin's unusual "One Nation" bus tour winds its way through the Northeast, Republican insiders seem convinced that the former Alaska Governor will not run for president. But if Palin defies the conventional wisdom and decides to seek the presidency, does she have a path to the Republican nomination? Although her negative ratings are high with Democrats and Independents, Palin remains popular with Republicans, and a surprising number remain open to her candidacy.

Among all adults, Palin's favorable ratings have grown steadily more negative since 2008, as shown in the chart below. These eroding numbers are why Palin fares consistently worse against Barack Obama than equally well known potential candidates, such as Mitt Romney or Mike Huckabee, in a series of national surveys conducted in recent months. (Huckabee announced in May that he will not run.) 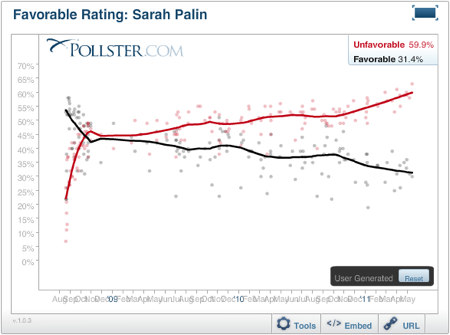 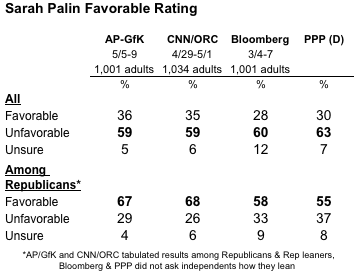 Palin's positive numbers compare well to even the best known Republicans. In the CNN poll, for example, her 68 percent favorable rating among Republicans compares to 70 percent for Mike Huckabee and 61 percent for Mitt Romney.

Of course, a having a positive impression of Palin is not the same as supporting her as a candidate for president. In late April, a Quinnipiac University survey asked the latter question. Nearly a third of Republicans (31 percent) said they would vote for Palin "enthusiastically," while about a quarter (24 percent) said they could "never" vote for her. Most of the rest of the Republicans (42 percent) picked the middle choice, saying they would "consider voting for" Palin.

These results confirm that Palin has a relatively large base of enthusiastic supporters. Twenty-four percent may not be enough to win a nomination, but a base that size is a strong start towards a potential victory in crucial early states like Iowa or South Carolina, where the winner may receive only 30 to 40 percent of the vote. Second, nearly three out of four Republican survey respondents remain at least open to the possibility of supporting Palin. That means her hardcore opposition is not yet large enough to pose an absolute barrier to winning over a majority of Republican primary voters.

But these results do not identify the upper ceiling on Palin's potential support for the GOP nomination. The Republicans who say they would "consider" supporting Palin no doubt include many who would very much prefer another Republican, perhaps any other Republican, as their nominee.

"[W]hile Republican voters generally like Palin and agree with her conservative views," conservative columnist Byron York writes, "they don't necessarily think she should jump into the race."

Back in April, a CNN/Opinion Research Corporation poll asked just that question, and Republican identifiers and leaners were almost evenly divided. Slightly more than half (53 percent) said they would like to see Palin run for the Republican nomination, while almost as many (47 percent) said they would not. Hopes for a Palin candidacy were slightly higher among Tea Party supporters (57 percent) and "pure" Republicans (58 percent among those who initially identify as Republicans, but just 48 percent among independents who lean Republican).

The polling data can ultimately take us only so far. They indicate that Palin has a potential path to the nomination, via an early state victory, but they get fuzzy fast on the question of whether she can win over a majority of Republican primary voters and caucus-goers. The answer to that question will ultimately depend on the kind of race Palin runs, if she does opt to run.

That brings us back to the many Republican insiders who are convinced that Palin will not run, who note Palin has taken few of the steps that potential presidential candidates usually take. Consider the comments York reported from an unnamed Romney supporter:

As political scientist John Sides reports, recent academic research shows that the number of endorsements a candidate receives from party leaders is ultimately a better predictor of the number of delegates they win, "even after accounting for the amount of money they raise and the amount of news coverage they receive."

That finding says something about primary voters and how they differ from the far larger numbers of voters who participate in general elections. In 2008, roughly 9 percent of U.S. adults voted in the Republican primaries and caucuses. That's a much smaller number than the roughly 20 to 30 percent of U.S. adults that identify as Republicans or the roughly 40 to 45 percent that either identify as or lean Republican(the group that national pollsters most commonly survey with questions about their presidential primary vote intentions). True primary voters are more invested in the political process than other voters, and it should come as no surprise that they place great value on the endorsements from political leaders willing to vouch for potential nominees.

As a result of her celebrity and her base, Sarah Palin is well positioned to dominate news coverage, draw voters to rallies, raise tens of millions of dollars over the Internet and build a nonconventional, grass-roots organization. But that may not be enough to overcome the doubts among rank-and-file Republican primary voters that are preventing Palin from translating her favorable ratings to electoral support.

To do that, Palin will need to compete in what political scientists like Brendan Nyhan, a RWJ Scholar in Health Policy Research at the University of Michigan, calls the "invisible campaign" among "activists, elected officials, donors, and party elites." Palin need not be the favorite of the Republican establishment, but if she runs, she will need to win a majority of those who vote in Republican primaries and caucuses. If she does that, she has a path to the nomination.